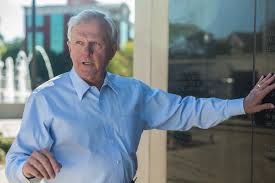 The forum was sponsored by the Talladega Democratic Party, was held at the historic Ritz Theatre in downtown Talladega, and was moderated by Alabama Political Reporter’s Editor, Bill Britt.  Over 60 people attended the event, which was open to the public.

Former U.S. Representative Parker Griffith (D) is a career medical doctor.  Rep. Griffith said, “My specialty is taking care of cancer patients.  Treating the sickest of the sick.”  On Governor Robert Bentley’s decision not to take the Medicaid expansion in Alabama, Griffith said, “I am stunned and appalled that someone with an MD behind his name would reject it.”  Griffith said that the Kaiser Foundation studied it and said that the State of Alabama would benefit from the expansion.  Dr. David Bronner looked at it from the financial side and said we needed to take it.  The University of Alabama study showed that Alabama should expand Medicaid.

Dr. Becker who was one of the authors of the University of Alabama study said that he was stunned that the State is not taking advantage of this.  “No reasonable answer was given,” Professor Becker said for the decision not to expand Medicaid.

Joel Taylor said that the healthcare industry in Alabama represents 80,000 jobs.  When the healthcare law was being debated in Washington the hospitals agreed to take cuts in how much they are reimbursed by Medicare in exchange for decreasing the number of people who do not have coverage.

Taylor said that there are over 200,000 people in Alabama that do not have insurance coverage but they do have access to emergency rooms which is the most costly place to provide care.  Some of them make payment arrangements, but many of them do not pay and the hospitals have to write it off as bad debt.  Taylor said the combination of the Medicare cuts with Alabama not taking the Medicaid expansion has put a lot of Alabama hospitals at risk.  Taylor said that expanding Medicaid could create 30,000 new jobs in Alabama’s healthcare sector.

“You have got to scratch your head of why you would turn down those federal healthcare dollars over a $171 million investment on your part.  The loser in this are the people in Alabama. The people who don’t have healthcare and the people who are not getting $20 billion in new economic activity.”

Becker is an associate professor at UAB Public School of Health.

Dr. Parker Griffith said that there is a Judeo/Christian ethic that is interwoven into the fabric of America.  Not providing healthcare cripples a large portion of Alabama. As a cancer specialist you see this example all the time.  A woman is discovered to have early stage breast cancer.  There is a 95% cure rate and curing the breast cancer treatment costs only about $25,000.  If the same woman is not diagnosed until it is stage three she is likely going to die and it will cost $500,000 in chemotherapy, radiation, and surgery to treat her.

Griffith called the argument that we can not afford to expand Medicaid a knee jerk ideological argument by people who haven’t looked at it.  “Most of the people who make that argument have health insurance.”  Expanding Medicaid would put another $1.5 billion a year into our economy and would save at least 500 lives.  It would have cost us nothing for the first three years and we never pay more than ten percent after that.  “As far as the jobs are concerned when we see a hospital close we see jobs lost.”

Jesse Smith (D) is a veteran with tours in both Bosnia and Iraq.  He is running for Congress in the Third Congressional District.  Smith said this affects people across America and the Third District, especially veterans.  There are 59,000 veterans living in the Third District and 13,000 of them are without health insurance.  “We need to expand Medicaid because not only are the people suffering but our veterans are suffering.”  Smith is challenging incumbent Representative Mike Rogers (R) from Saks.

Joel Taylor said, “Healthcare is an odd industry.  We provide services we often don’t get paid for.  Uncompensated care is 10% of my operating expenses.”  Taylor said that hospitals provide a service to the community that is very similar to a public utility. “With Alabama Power, if you don’t pay for the service they cut you off.  That is not the case with hospitals there is a federal mandate that we provide emergency care.  If you do not have the ability to pay or will not pay it goes to bad debt.”

“The hospitals willingly gave up money (in the Obamacare debate) to decrease the uninsured.”
Dr. Becker said, “We are changing the convoluted way of compensating hospitals for uncompensated care.”  The nation is transitioning away from this old mechanism to this new mechanism where Medicaid was to become the insurer for more of the poor decreasing the number of the uninsured, but a lot of states like Alabama did not expand Medicaid.  There is no remedy insight and a lot of uncertainty.  “A lot of community hospitals may close as a result.  That is bad for people in Alabama and bad for rural hospitals.”  Becker acknowledged that the Troy University study disputes his findings, but defended his methods.

Mr. Smith said that veterans would definitely benefit from the expansion of Medicaid.  The Veterans Administration will pay for treatment of an injury if it is from a service related disability, but will not if that injury is not a service related disability.  A veteran can be receiving treatment for his injuries suffered in Iraq or Afghanistan, but have no coverage for conditions not due to his or her service.

Rep. Griffith said that 40 to 50% of bankruptcies are related to medical bills.  Coosa County has no hospital and no doctor.  Lamar County has no hospital no doctor.  Ten hospitals have closed in recent years and several are on the watch list.  “Think of the number of Medicare recipients who have to drive 40 to 50 miles to get care.”  The first sixty minutes are critical to someone suffering from a stroke to save more of that brain.  The University of Alabama study says 500 Alabamians a year will die if we do not expand Medicaid.  “All of us would benefit from it.”  The net impact on the state budget.  The State would receive an additional estimated tax revenue of a net $700 million.

Griffith said that this debate is not about Medicaid it is about a philosophy that is opposed to all government.

Jim Williams said that some have said that they oppose Medicaid expansion because of the “woodwork effect.”  The existing Medicaid program does not compensate the state at the same high rate that the expansion does.  The woodwork theory is that if the state expands Medicaid, more people will sign up and actually be in the original Medicaid program costing the State’s general fund budget even more.

Parker Griffith said, “We want them to come out of the woodwork.”  Our infant mortality rate is 11 per thousand births.  Half of Alabama counties do not even have obstetric services.  “You can not recruit doctors to a county with no hospital.”

Sandra Campbell said, “I used to practice bankruptcy law and I have seen many many people ruined by medical bills.  Even people on Medicaid are struggling to pay for medications that Medicaid will not pay for.”

Joel Taylor said that the audience in the room tonight is already in favor of Medicaid expansion.  The audience that is not here that we need to reach out too is moderate Republicans.  Many of them understand that this would be good for the state; but to this point have not been willing to come forward.  “I don’t know how to make those moderate Republicans braver.”

Parker Griffith said that we need a Medicaid expansion program that is tailored to Alabama.  The state is tops in the country for: diabetes, cigarette consumption, obesity, heart disease…..  “There is only one state who has worse health than Alabama and that is next door in Mississippi.”  We think of healthcare as an emergency room but need to think of it as a way to prevent illness.

Griffith said, “There are a lot of good moderate Republicans out there who know that this is the right thing.”  “Mike Hubbard’s management style is bullying and fear.”  “I want to be able to craft a program that I can take to my friends in the Republican Party and have them say that this is a program than I can support.”

Griffith introduced former state Representative James Fields (D) who is running for Lt. Governor.  “He has traveled the whole state and he is passionate about healthcare.”

When asked why many doctors have opposed the Patient Protection and Affordable Care Act, Griffith said that most doctors are in a cocoon.  Everybody at their practice tells them how smart, funny, witty they are because they are in charge.  “The dollars in their retirement funds are federal dollars they are Medicare dollars.  The Government controlled medicine is an argument for the uninformed.  95% of the private healthcare insurance market in Alabama is controlled by Blue Cross Blue Shield.  There is no competition.  Doctors are funny people.  My father raised three boys and we are all doctors…he never finished 8th grade. It is easy to fall into the trap of thinking they did it all on their own.”

Joel Taylor said that for most doctors, Medicaid is an important piece of doctors’ business.  They are all over the board on this.  Many have not investigated this topic.  I think they are aware but it gets lost in their political ideology.

Parker Griffith said, “The new doctors that are under 40 are a different breed.  They support this.  In the future virtually all doctors will be on a salary.

Griffith said, “This is Alabama.  This is the State that created the atmosphere for the Civil Rights Movement.”  Medgar Evers gave his life so everyone can vote.  Can we not vote?  “We need to light the fuse in our churches in our stores.  The beginning of any revolution is kicking in that rotten door.”  “I have heard our governor say he does not trust our government to carry through with their promises.  He is out of touch, out of ideas and needs to be out of office.”

The Chair of the Talladega Democratic Party Stephanie Engle presented certificates of appreciation to Dr. David Becker and Joel Taylor for their efforts to educate the public about the Medicaid Expansion.  Chairwoman Engle also presented a Certificate of Appreciation to the Ritz Theater and Gayle Montgomery for hosting the forum.

Finally, Engle presented Bill Britt with a certificate praising him for his contributions to investigative journalism and broadcasting in the state of Alabama, as editor of The Alabama Political Reporter and the host of The View, which is seen by 70,000 Alabamians a week.

The Alabama Political Reporter spoke with Ron Crumpton, candidate for the Alabama Senate in district 11, after the event.  Crumpton (D) said that although he organized the forum and it was his idea, he was barred from participation in the forum by Stephanie Engle over creative differences.

The general election will be November 4.