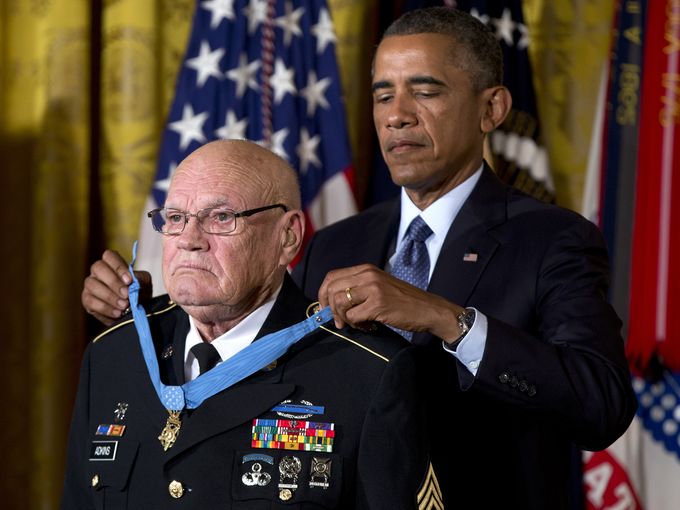 Monday, September 15, Alabamian Command Sergeant Bennie Adkins was awarded the Medal of Honor for heroism during his service in the Vietnam War. President Barack H. Obama awarded the medal to Adkins (an Opelika native) in a ceremony in the White House.

Before the ceremony, U.S. Representative Martha Roby (R from Montgomery) said in a statement, “Today a very special Alabamian will receive the Medal of Honor: Bennie Adkins of Opelika who served three tours in Vietnam and survived four days at Camp A Shau, where he fought off enemy forces and rescued fellow soldiers. He sustained 18 wounds in battle and received the Purple Heart while serving in Vietnam.”

Rep. Roby continued, “But it took an act of Congress for Mr. Adkins to receive the Medal of Honor some 48 years after battle. He will receive the Medal today at a White House ceremony and will be inducted into the Hall of Heroes during a ceremony at the Pentagon on Tuesday. His story of unwavering service and courage is nothing short of inspiring. I hope you’ll read it and share it with younger Americans. Thank you Mr. Adkins for your service to this country, and congratulations on this long-overdue, but well-deserved recognition.”

The Speaker of the Alabama House of Representatives Mike Hubbard (R) from Auburn wrote on Facebook, “A great ceremony at the White House today for one of Alabama and America’s finest, Army Command Sgt. Maj. Bennie Adkins. When his fellow soldiers needed him, Sgt. Maj. Adkins ran through enemy fire to drag them to safety. Susan and I are grateful that he is part of our community, and honored for his service.”

On August 26 it was announced that President Obama would award the Medal of Honor to U.S. Army Special Forces veteran Bennie G. Adkins.

Congressman Mike Rogers (R from Saks) issued a statement upon learning the news. Rep. Rogers who represents Opelika said, “Mr. Adkins is a true American hero who served his country in Vietnam. His acts of heroism during his tour of duty earned him our nation’s highest honor, which he has long deserved. I congratulate Mr. Adkins on this honor and thank him for his bravery, sacrifice and service to our nation.”

Rep. Rogers was instrumental in shepherding the legislation to waive the customary three year time limit for awarding the Medal of Honor. Command Sgt. Adkins served three tours of duty in Vietnam with the Special Forces; but this medal is for his actions on March 9 thru 12, 1966.

President Obama said, “In Bennie’s life, we see the enduring service of our men and women in uniform. He went on to serve a third tour in Vietnam, a total of more than two decades in uniform. After he retired, he earned his Master’s Degree -– actually not one, but two. Opened up an accounting firm. Taught adult education classes. Became national commander of the Legion of Valor veterans organization. So he has earned his retirement, despite what he says. (Laughter.) He’s living outside Auburn. And, yes, he is a fan of the Auburn Tigers, although I did a poll of the family and there are some Crimson Tide fans here. (Laughter.) So there’s obviously some divisions. But Bennie will tell you that he owes everything to the men he served with in Vietnam, especially the five who gave their lives in that battle. Every member of his unit was killed or wounded. Every single one was recognized for their service.”

According to the account on the U.S. Army’s web site; “At that time, then-Sergeant First Class Adkins was serving as an Intelligence Sergeant with Detachment A-102, 5th Special Forces Group, 1st Special Forces at Camp A Shau, in the Republic of Vietnam.

When Camp A Shau was attacked by a large North Vietnamese and Viet Cong force in the early morning hours of March 9, then-Sergeant First Class Adkins rushed through intense enemy fire and manned a mortar position defending the camp. He continued to mount a defense even while incurring wounds from several direct hits from enemy mortars. Upon learning that several Soldiers were wounded near the center of camp, he temporarily turned the mortar over to another Soldier, ran through exploding mortar rounds and dragged several comrades to safety. As the hostile fire subsided, Adkins repeatedly exposed himself to sniper and mortar fire, while moving casualties to the camp dispensary.

Adkins exposed himself to enemy fire transporting a casualty to an airstrip for evacuation. He and his group then came under heavy small-arms fire from members of the Civilian Irregular Defense Group, which had defected to fight with the North Vietnamese. Despite this overwhelming force, Adkins maneuvered outside the camp to evacuate a seriously wounded American and draw fire away from the aircraft, all the while successfully covering the rescue. Later, when a resupply air drop landed outside of the camp perimeter, Adkins again moved outside of the camp walls to retrieve the much-needed supplies.

During the early morning hours of March 10, enemy forces launched their main assault. Within two hours, Adkins was the only defender firing a mortar. When all mortar rounds were expended, Adkins began placing effective recoilless rifle fire upon enemy, as they infiltrated the camp perimeter and assaulted his position. Despite receiving additional wounds from enemy rounds exploding on his position, Adkins fought off relentless waves of attacking Viet Cong.

Adkins then withdrew to regroup with a smaller element of Soldiers at the communications bunker. While there, he single-handedly eliminated numerous insurgents with small-arms fire, almost completely exhausting his supply of ammunition. Braving intense enemy fire, he returned to the mortar pit, gathered vital ammunition and evaded fire while returning to the bunker. After the order was given to evacuate the camp, Adkins and a small group of Soldiers destroyed all signal equipment and classified documents, dug their way out of the rear of the bunker, and fought their way out of the camp.

Because of his efforts to carry a wounded Soldier to an extraction point and leave no one behind, Adkins and his group were unable to reach the last evacuation helicopter. Adkins then rallied the remaining survivors and led the group into the jungle, where they evaded the enemy for 48 hours, until they were rescued by helicopter, March 12. During the 38-hour battle and 48-hours of escape and evasion, Adkins fought with mortars, machine guns, recoilless rifles, small arms, and hand grenades, killing an estimated 135 – 175 of the enemy and sustaining 18 different wounds. Adkins’ extraordinary heroism and selflessness, above and beyond the call of duty, are in keeping with the highest traditions of the military service, and reflect great credit upon himself, Detachment A-102, 5th Special Forces Group, 1st Special Forces and the United States Army.”

The commanding officer of Camp A Shau at the time was retired Col. John D. Blair IV, then a captain. Col. Blair said, “Sgt. 1st Class Adkins’ contribution to the defense of the camp and subsequent recovery of the survivors was far above and beyond that called for by duty.”

Command Sgt. Adkins served with the Special Forces for more than 13 years with the 7th, 3rd, 6th and 5th Special Forces Groups (Airborne). Adkins retired from the Army, in 1978.

Adkins earned his bachelor’s degree, a Master’s Degree in Education, and a Master’s Degree in Management from Troy State University. While in college he established the Adkins Accounting Service, Inc., in Auburn, Alabama, where he was the CEO for 22 years. He also taught night classes at Alabama’s Southern Union Junior College for 10 years, and at Auburn University for six years. Adkins and his wife, Mary, raised five children. They have been married for 59 years.