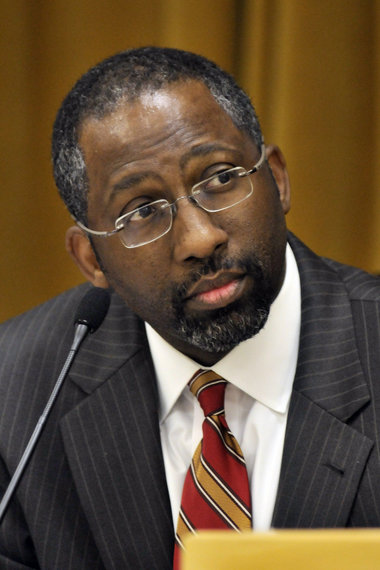 Witherspoon said in a written statement, “Today, I announce that I am resigning as Superintendent of Birmingham City Schools effective December 31, 2014. This decision will allow me to pursue other opportunities, and gives the Board of Education the time needed to make a smooth transition as it searches for a new superintendent. In the past 4 ½ years as Superintendent for Birmingham City Schools I have gained 24,500 great memories I can take along with me the rest of my professional journey. I thank this board, our parents, community members, and our students for allowing me the wonderful opportunity to serve as superintendent.”

Witherspoon continued, “When I reflect on my time as superintendent, I recount the great strides made during my tenure.” Witherspoon listed several achievements including: Increased graduation rate by 15 points based upon latest preliminary data; Reduced dropout rate by 8 points at 4 percent; Worked with state team to increase fund balance from $2 to $20 million; Made strides toward restoration of district’s accreditation; Implemented and expanded career academies across Birmingham City Schools; Implemented Dropout Recovery Program, graduating over 500 students; Reduced student flight from the district by increasing student retention; Expanded enrollment in Advanced Placement offerings and International Baccalaureate Programming; Expanded the number of pre-kindergarten classrooms in the district from 9 to 23; and Secured a $19 million GearUp grant to help advance learning at middle schools.

Witherspoon concluded, “Each of these accomplishments helped us establish a solid foundation for the future of Birmingham City Schools. I am personally excited about that future. In closing, I thank the Board of Education for allowing me to serve. I also thank the teachers, staff and principals. Our work together helped contribute mightily to every one of our accomplishments. I send a special thanks to parents and community members for being vested and engaged in our schools. The kind of community interest we have in Birmingham is rare and does not get enough appreciation. Lastly, I thank our students. It is because of you that I awake each day to work in education. The foundation is set for a strong future. And, the time is now for this Board of Education to write others chapters of success for our district. I am honored to have played a role in pointing Birmingham City Schools toward a path of progress.”

Sources close to the situation told the Alabama Political Reporter on Tuesday that they believed that there were enough votes on the Birmingham City School Board to remove Witherspoon as Superintendent. The Superintendent’s resignation avoided an angry confrontation with the state of Alabama. The last time that the Birmingham City Board of Education fired Witherspoon it led to a state takeover of the system.

On August 13, 2012 the State of Alabama won a “complete victory” in its lawsuit against the Birmingham Board of Education (Birmingham BOE) at the time.

Judge Houston Brown of the Jefferson County Circuit Court found in favor of the State Board of Education and Alabama Attorney General Luther Strange. The state’s lawsuit was merged with a related case brought by embattled Birmingham City School Superintendent Dr. Craig Witherspoon. Judge Brown found that the Birmingham Board of Education had no grounds to fire Dr. Witherspoon and did not have the authority to fire the Superintendent in the midst of a state takeover.

Every school system in the state of Alabama is required to have a minimum of 30 days of expenses in cash on hand. At that time the embattled Birmingham BOE only had 2 days of reserves on hand. Instead of passing measures to increase the cash on hand of the system, the Birmingham BOE made moves to fire their own school superintendent (Dr. Witherspoon). This prompted the Alabama Board of Education and State School Superintendent Dr. Tommie Bice to intervene in the troubled inner city school system. The Birmingham BOE refused to accept state authority. At one point the Board replaced Dr. Witherspoon with Birmingham Chief of Operations Samuetta Drew in defiance of Dr. Bice, threatened to remove Dr. Ed Richardson (appointed acting CFO of the system by the state) by force, and locked the State intervention team out of the school system headquarters. Those antics led the state to sue the Birmingham BOE.

The Court ruled then that the Birmingham BOE has “engaged in a pattern of decision making, action, and inaction that has impeded or prevented implementation of plans, initiatives, and programs designed to meet the Birmingham Board’s financial and fiduciary obligations under State law and to ensure the provision of appropriate education services to 25,000 students.”

The Court ruled in favor of the state and Superintendent Witherspoon and held that the Birmingham BOE had no authority to fire him during a state takeover. The State Board of Education and State Superintendent Bice were authorized to take “all of the actions they have taken with respect to the Birmingham Board of Education at all material times.” This allowed the state to implement the financial recovery plan which included over 200 layoffs and demotions of Birmingham City Schools personnel. In August a Judge ruled in favor of many of those who were laid off or transferred saying that despite the reduction in force proper procedures were not implemented in deciding who was let go.

Witherspoon who was an outsider that the Board brought in from a smaller North Carolina system never really meshed well with the Birmingham City School Board and revelations that the Superintendent had access to a $64,000 slush fund that violated State procedures.

There is no word at this time how the Board will proceed in finding Witherspoon’s replacement.