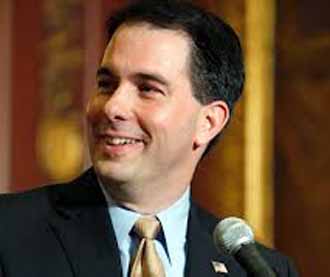 BIRMINGHAM—On Friday, November 14, Alabama Republican Party Chairman Bill Armistead said in his column that he believes that Wisconsin Governor Scott Walker (R) will be a GOP Presidential Candidate in 2016.

ALGOP Chairman Armistead said in a column, “The big question now is ‘will Gov. Scott Walker run for President in 2016?’ It may be too early to tell for sure, but if I were a betting man I’d put my money on him being an announced candidate for president within six months.”

Chairman Armistead wrote, “No other governor has done what Wisconsin Governor Scott Walker has done. He won the governor’s race in Wisconsin three times in four years. Wisconsin, known for its liberal politics, elected conservative Republican Governor Scott Walker in 2010 against all odds. No one really gave this conservative Republican a chance to win in 2010. But on November 2, 2010, Walker’s 43rd birthday, he defeated Democrat Tom Barrett 52 percent to 46 percent.”

Armistead said that Walker inherited a budget deficit of $2.9 billion. Walker angered the State employee unions by balancing the budget with the “Wisconsin Budget Repair Bill,” which included a provision that reduced the benefits of the State’s union employees. Walker successfully fought off a union funded recall effort that required Gov. Walker to run for governor again in his second year in office.

Armistead said that in 2014, “The National Democratic Party made the defeat of Gov. Walker their number one priority. President Obama recruited liberal Democrat Mary Burke to run against Gov. Walker not only to deny him a second term as Governor, but to stop him in his tracks from running for the Republican nomination for President. But, after pouring millions of dollars in this race to defeat Walker, Obama and the liberal Democrats failed once again. Gov. Walker prevailed for a third time in four years winning by 53 percent to 46 percent.”

Armistead said, “Walker, a pastor’s son, is a social conservative and strong supporter of traditional marriage, and is an unashamed pro-life governor. He has demonstrated that he is a fiscal conservative, and he appeals to independents and so-called “Reagan democrats.” It is hard to make the argument that he can’t win. Governor Walker’s victory speech last week gave insight into the role that faith plays into his life. “First off I want to thank God. I want to thank God for his abundant grace and mercy. Win or lose, it is more than sufficient for each and every one of us.” That says a lot about the Wisconsin governor who does not wear his religion on his sleeves, but is neither ashamed of his faith in God; much like our Founding Fathers.”

Governor Walker told CNN Sara Fischer on Monday, November 17, “The closer you get to something like that the more you realize — and I say this only half jokingly — that you have to be crazy to want to be president. And anyone who has seen pictures of this president or any of the former presidents can see the before and after. No matter how fit, no matter how young they are, they age pretty rapidly.”

On Sunday, Walker appeared on ‘Meet the Press.’ When asked if he would support Congressman Paul Ryan (R from Wisconsin) for president, Walker said, “I love Paul Ryan. I’ve said many times before I’d be the president of Paul Ryan fan club. But I do think if we’re going to beat Hillary Clinton in this next election, we’ve got to have a message that says, “Hillary Clinton is all about Washington.” I think in many ways, she was the big loser on Tuesday because she embodies everything that’s wrong with Washington.” Walker said that he believes, “Governors make much better presidents than members of Congress.”