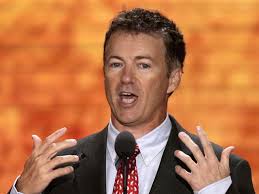 On Wednesday, December 3, the Alabama Republican Party announced that U.S. Senator Rand Paul (R from Kentucky), a probable 2016 Republican presidential candidate, will be the keynote speaker for their 2015 ALGOP Victory Celebration and Winter Dinner.

The event will be held at the Montgomery Renaissance Hotel on February 20, 2015, at 7:00 pm. The ALGOP Winter Meeting will follow on Saturday.

Alabama Republican Party Chairman Bill Armistead said in a written statement, “We are honored to have Senator Rand Paul as our keynote speaker as we celebrate the incredible statewide Republican successes the Party had during this election cycle.”

Chairman Armistead continued, “The Victory Celebration will give Alabamians an opportunity to see up close one of the leading candidates for the Republican presidential nomination. Senator Paul has ignited a lot of excitement amongst a segment of our population that we need to become more active in our Party: young people, females and minorities. We look forward to celebrating our victories with Republicans from every corner of the state at the Winter Dinner on February 20, 2015.”

Chairman Armistead said, “The Victory Celebration will be an opportunity for the party to unite in showing our appreciation to all of our candidates who sought office this year. A great sacrifice was made by all, and we owe a debt of gratitude to the candidates, their supporters and the grassroots workers for these magnificent victories.”

Dr. Paul is an ophthalmologist and is a graduate of the Duke University School of Medicine. In 1995, he founded the Southern Kentucky Lions Eye Clinic, an organization that provides eye exams and surgery to needy families and individuals. Today, even as a U.S. Senator, he continues to provide pro-bono eye surgery to Kentuckians in need of care.

Rand Paul supports term limits, a balanced-budget amendment, a Read the Bills Act, and an audit of the Federal Reserve. Sen. Paul has been married for 23 years to Kelley Ashby of Russellville, KY, and they have three sons.

Senator Paul’s father, Congressman Ron Paul (R from Texas), was a GOP Presidential candidate in 2012 and 2008 and was the Libertarian Party presidential nominee in 1988.