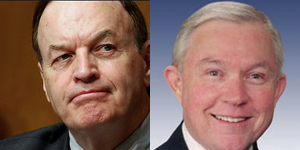 On Saturday, December 13, U.S. Senators Richard Shelby (R-AL) and Jeff Sessions (R-AL) both voted against the fiscal year 2015 omnibus appropriations bill passed at the 11th hour to avoid a government shutdown and keep the government funded until October.

Senator Shelby released a written statement after the Senate’s vote on the fiscal year 2015 omnibus appropriations bill. Shelby wrote, “While I support funding the government, as well as several conservative priorities and provisions important to Alabama in the omnibus, I opposed the overall bill.”

Sen. Shelby explained, “The omnibus fails to properly address President Obama’s action to grant amnesty to millions of illegal immigrants through executive fiat. I remain firmly opposed to providing amnesty to those who have broken our laws and I stand ready to fight against the President’s executive overreach when Republicans control both the House and the Senate next Congress.”

Sen. Sessions said in his own statement before the vote: “For the sake of the Constitution and our constituents, Congress should fund the government but not fund the President’s unlawful amnesty. In plain violation of law, the President’s order gives amnesty and work permits to 5 million illegal immigrants – allowing them to take jobs directly from struggling Americans.”

Sen. Sessions continued, “Unfortunately, not only has Congress so far not attempted any effective action to block the President’s amnesty, but the legislation that passed tonight funds through September of next year many policies that the House itself rejected only a few months ago. In effect, the omnibus provides the Administration with billions of dollars to carry out President Obama’s resettlement plan for illegal immigrants in U.S. communities. The legislation also continues to allow the recipients of the President’s amnesty to receive billions of dollars in government checks in the form of tax credits and to participate in programs through myriad government agencies such as Social Security and Medicare.”

Sen. Sessions said, “The American people are justly worried about their jobs, their schools, and their communities. They have rightly demanded a lawful system of immigration that serves their interests – not the special interests. They have correctly pleaded with their lawmakers to finally adopt immigration policies that put their needs – the needs of American citizens – first. So, to them I say: we are only just beginning. We are going to fight harder than we ever have before. Those who think that this issue will recede, or fade away, are mistaken. The voice of the American people will be heard.”

The Senate passed a $1.1 trillion spending bill late Saturday that funds the government through next September, averting a partial government shutdown and sending the measure to President Obama’s desk. Senate Majority Leader Harry Reid (D from Nevada) blocked anyone, conservative like Senators: Sessions, Shelby, and Ted Cruz (R from Texas) as well as liberals like Sen. Elizabeth Warren (D from Massachusetts) from changing any part of the bill that came from the House. Changes would have sent the Omnibus back to the House where many conservatives (like Representatives Mo Brooks (R from Huntsville) and Mike Rogers (R from Saks) as well as liberals like Nancy Pelosi (D from California) opposed many parts of the compromise legislation. Since the C.R. was loaded with numerous amendments (many of them having nothing to do with appropriations) to get the necessary votes for passage it would be difficult for a new C.R. to pass.

The Senate voted 56-40 for the long-term funding bill, the main item left on Congress’ year-end agenda. The measure provides money for nearly the entire government through the end of the current budget year Sept. 30.

The Department of Homeland Security is funded only until Feb. 27 to set up a new showdown with the Obama administration over his controversial immigration edicts.

Senator Ted Cruz (R from Texas) pushed the Senate to cast its first vote on the Obama administration executive amnesty policy which gave millions of illegal aliens legal status to remain in this country. The effort was a disaster losing 74 to 22 Saturday night. 23 of the 45 Republican Senators voted down Cruz’s doomed Texan’s point of order.

Senator Richard Shelby is the Vice Chairman of the Senate Appropriations Committee.

Senator Jeff Sessions is the Ranking Member of the Senate Budget Committee.

There have been reports that moderates in the GOP Senate Caucus are attempting to push Sen. Sessions out as Budget Committee Chairman in the new Republican Senate in favor of the much more moderate Sen. Mike Enzi (R from Wyoming).

(Original Reporting by Fox News, the Daily Caller and The Associated Press contributed to this report)