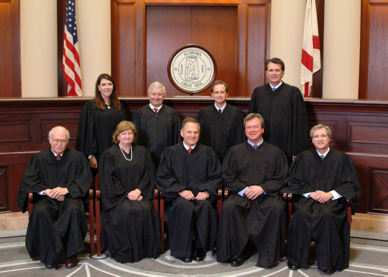 On Wednesday, February 11, the conservative Alabama Policy Institute (API) joined Liberty Counsel and the Alabama Citizens Action Program (ALCAP), in filing a Writ of Mandamus to the Alabama Supreme Court requesting that the Court order probate judges in Alabama not to issue same-sex marriage licenses arguing that this is in violation of Alabama’s Constitution.

API wrote in a Monday email to supporters that: “Alabama’s probate judges should not be bound by the ruling from the Southern District of Alabama. We asked the Alabama Supreme Court to make this clear in a formal opinion. On Friday afternoon, the Court granted our petition and has agreed to take up the case.”

Alabama Supreme Court Chief Justice Roy Moore (R) has previously ordered the Probate Judges not to issue marriage license to same sex couples. Some Probate Judges have obeyed the Chief Justice and others have defied the conservative Chief Justice arguing that when U.S. District Judge Callie Granade declared both Alabama’s marriage statute and its pro-traditional state constitutional amendment as in violation of the U.S. Constitution’s 14th Amendment that they are required to issue the licenses.

At issue here is the Supremacy Clause of the US Constitution. Advocates for gay marriage in Alabama argue that all federal law, including a ruling by a lower federal court, is supreme to Alabama’s state laws including the state constitution. Chief Justice Roy Moore however argues that state judges and the state court system have a parallel authority to the federal courts and ability to interpret the constitutionality of law that can only be superseded by the US Supreme Court.

Also at issue here is whether or not Chief Justice Moore should recuse himself from hearing this case. The popular Chief Justice has commented on the Granade ruling on ABC’s Good Morning America, Fox News, and numerous other TV and radio programs and wrote a legal opinion on the subject in a letter to Gov. Bentley. Having already commented on this issue publicly numerous time, can Chief Justice Moore hear the case of same sex marriage advocates while still appearing to be impartial?

If the Alabama Supreme Court does rule in favor of the Alabama ban on gay marriage can that ruling be overturned by a federal court or will Chief Justice Moore argue that only the US Supreme Court has that authority. If the Alabama Court rules that Probate Judges do not have the authority to issue marriage licenses to same sex couples, are all the hundreds of licenses that have already been issued legally valid?

The US Supreme Court will rule on same sex marriage in June.