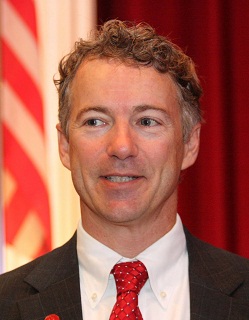 Sen. Paul said that when he proposed cutting spending and balancing the budget Washington acted like he was an extremist, then he went home to Kentucky and the people said that that would be a good start. The people are not just concerned about the deficit, but “In the real world they want us to do something about the $18 trillion debt.”

Paul said that during 2013’s government shutdown the administration was worried no one in America would notice so did thing like close the scenic overlook to Mt. Rushmore and decided to close the World War II monument and had to wrap it with barricades. “The image of the shutdown was World War II veterans cutting down the barricade and throwing them the barricades down in the lawn of the White House.

Paul recounted how it is so difficult to fire a federal employee that you can’t fire people who steal from you. You can’t fire people who lie to you. In the VA scandal people were leaving veterans on a waiting list to die and then lying about it. You still could not fire them even with veterans dying. We had to pass a law so that you could fire a VA employee for falsifying records and allowing veterans to die. One EPA worker had been caught stealing from us for 11 years. We asked about him and they said he had been fired. Then found out that he was still on the payroll. Then EPA administrator McCarthy told us that they were allowing him to retire but last we found out that he had decided not to retire and was still getting paid. Paul said that the federal governments is, “Absolutely and utterly out of control.”

Paul said that during the Ebola scare we heard that Congress had not appropriated enough money to fight infectious disease at the CDC. Then we looked at it and found that the CDC was spending only a small amount of its money on infectious disease. “They spend a million dollars trying to determine if male fruit flies liked younger female fruit flies.” They spent money on origami condoms. I don’t even know that is.

Sen. Paul said that NASA spent half a million dollars studying what menu we are going to serve on Mars. They sent a bunch of college kids to Hawaii at a cost of $5000 to study the issue and then do you know what they decided? Pizza. NASA spent $125,000 on a 3d printer that makes pizza.

Paul said that Admiral Mullin said that the number one threat to our national is the national debt.

Paul lamented, “The utter disaster we have had for the last six years,” and warned of the usurpation of power by the executive branch of Congress. Sen. Paul said that the Founders created a system where, “The ambition of Congress would be pitted against the ambition of the President,” so that there would be a balance of power, but for 100 years more and more power has been gravitating to the President.

Only Congress has the authority to take us into war. “George Bush had us in two wars and Congress voted both times.” We have been fighting for six months in Syria without any vote of Congress.

The Obama Administration has had a “I will do what I please” attitude. They changed immigration law by executive decree, they changed Obamacare by order. Separation of powers is a fundamental principle in the Constitution that we are losing.

Paul attacked Hillary Clinton for her role in the Benghazi attack where four Americans were killed. Paul accused Hillary of spending lavish amounts of money on non-essential things like new crystal for our embassies while ignoring pleas for more security in Libya.

Paul was introduced by US Senator Richard Shelby (R-Alabama). Sen. Paul said that you look to see how Senator Shelby is on an issue, because that is usually the right side.

Dr. Paul is an ophthalmologist and is a graduate of the Duke University School of Medicine. In 1995, he founded the Southern Kentucky Lions Eye Clinic, an organization that provides eye exams and surgery to needy families and individuals. Today, even as a U.S. Senator, he continues to provide pro bono eye surgery to Kentuckians in need of care.

Rand Paul supports term limits, a balanced-budget amendment, a Read the Bills Act, and an audit of the Federal Reserve. Sen. Paul has been married for 23 years to Kelley Ashby of Russellville, Ky., and they have three sons.

Senator Paul’s father, Congressman Ron Paul (R-Texas), was a GOP Presidential candidate in 2012 and 2008 and was the Libertarian Party presidential nominee in 1988.