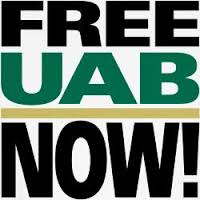 On Saturday, March 14, the UAB Men’s basketball team won the Conference USA basketball tournament and an automatic trip to the NCAA Basketball Playoffs.

“UAB’s march through the Conference USA basketball tournament was worst case scenario for Dr. Watts and the BOT for two reasons. First, it continues to shine a light on the misdeeds of the administration and the Board. Their treachery will be paraded before a national audience on TV and radio as well as in print. Once more, four months after the fact the story no one cared about will be a national story line. Dr. Watts and the BOT will not look good. Secondly, this community rallied behind this team – and deservedly so – and this team now embodies the spirit of our community. They have energized the UAB fan base – not just in support of men’s basketball – but they have also become a symbol to rally around against the actions of Dr. Watts and the BOT. This win should be a reminder to Dr. Watts and the BOT that we are not going away. Our numbers are growing and our will is as strong as the iron that was once mined out of Red Mountain.”

UAB VP of Financial Affairs and Administration Allen Bolton said in an email to the task force:

“We received the proposal from OSKR to review the initial report relating to the costs of funding a winning football program at UAB. It has been reviewed by our counsel, which is our standard procedure with all proposed contracts.  It goes without saying, the work of the Athletic Assessment Task Force is very important. There are many diverse opinions regarding the original study and our objective in setting up this group was to have a fresh, new, independent, non-biased firm re-evaluate this issue.  To many, it is clear that OSKR formed their opinion on this issue long ago. Any report they issue cannot be considered unbiased.”

Multiple media sources are reporting that UAB President Ray Watts refused to even meet with OSKR officials before dismissing the firm.  Watts terminated the three sports unilaterally based on a Carr and Associates study that concluded that it would take over $50 million for UAB to have a competitive football program.

Speaking at a recent rally in Montgomery Rep. Williams said:

“Can we find a way to give equal voice in the system to the members of the Birmingham community and to the members of the Huntsville community or do we need to go our own way? That decision is up to the board of trustees in whether they deal with us fairly or not…We want football in 2016. A good solid football program drives student enrollment. The people that killed our football program knew that…When you came after our university, you come after Birmingham, Jefferson County, the greater Birmingham community and if you understand how economic development works they have stood against the interests of the entire State of Alabama.”

Free UAB supporters contend that the University of Alabama campus in Tuscaloosa has an inordinate influence on the current BOT and the Birmingham and Huntsville campuses. UAB backers asking for the State legislature to intervene on their behalf point to the fact that the majority of students in Tuscaloosa are from other state or countries, while 87 percent of UAB students were raised in Alabama families.  They argue that football is an essential part of the undergraduate experience.

Original reporting by ABC 33/40 contributed to this report.

A UAB doctor says kids can enjoy a safe Halloween this year by following several tips.