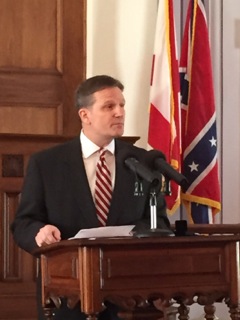 MONTGOMERY—Wednesday, Gov. Bentley swore in Col. Jeff Dunn to serve as the next Commissioner for the Department of Corrections.

Bentley said that while the current administration did not create the problems at corrections, “that doesn’t mean that we’re not going to solve them.”

He said that it is no secret that the DOC faces many challenges, but that progress has been made over the last four years.

In 2014, Gov. Bentley signed an executive order to form the Alabama Prison Reform Task Force chaired by Sen. Cam Ward. SB67, which addresses prison reform, is currently working its way through the Legislature. Passed out of Senate committee, it is scheduled to be heard on the floor this Thursday.

Dunn said, “The Department of Corrections is absolutely committed to doing everything within its power to work cooperatively with the task force, the legislature and the various departments to address these challenges facing the State’s Prison System. As we move forward, we will do our part to uphold the public trust with high standards of professionalism, integrity and accountability.”

According to a press release from Gov. Bentley’s office, “Dunn, a native of Alabama, currently serves as commander of the Thomas Barnes Center for Enlisted Education at Maxwell Air Force Base. He graduated from Birmingham Southern College in 1986 with a degree in English and earned his military commission through ROTC. He has held various flying assignments in bombers, airlift and undergraduate pilot training. He has served on the Air Staff, at U.S. European Command Headquarters and for the Office of the Secretary of the Defense. Colonel Dunn has held various leadership roles during his twenty-eight year military career.”

Colonel Dunn is a former Instructor/Navigator and currently is a retired Senior Pilot with over 3100 flying hours in the B-52, C-141, C-9, T-37, T-38 and T-1 aircraft. Most recently, he was the Senior Military Assistant to the Assistant Secretary of Defense for Homeland Defense and Americas’ Security Affairs.

Dunn is replacing Kim Thomas who resigned in January after serving as Commissioner from 2011-2015.