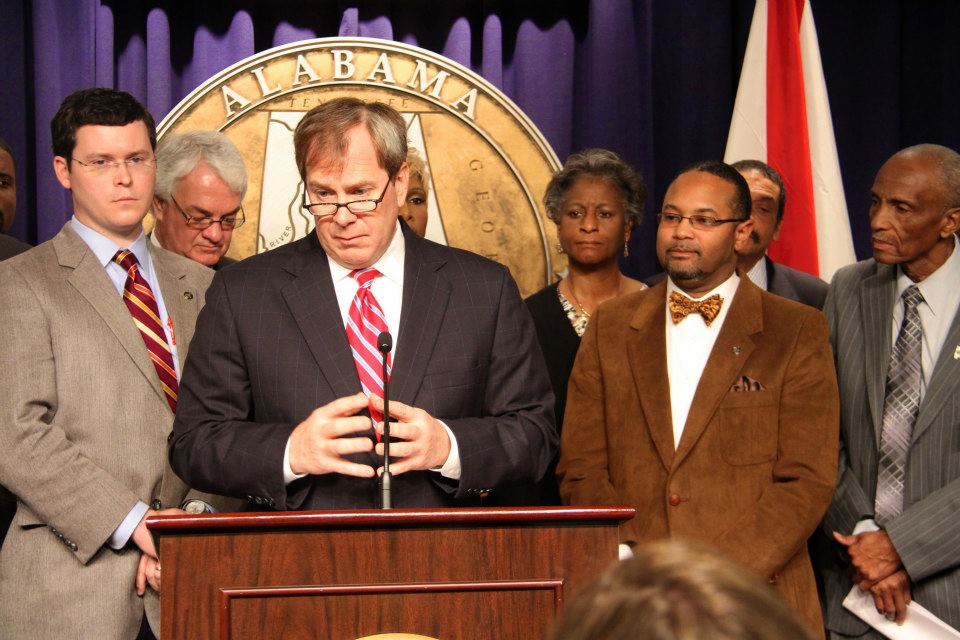 House Minority Leader Craig Ford (D-Gadsden) said that the Democrats have been trying to work with the Republican supermajority to solve the issues facing the State but the Republicans have not shown any leadership so the Democratic Caucus is, “Coming today with our package to address the $700 million shortfall.”

State Representative John Knight (D-Montgomery) presented his plan to remove the sales tax on groceries. Rep. Knight said that when you want the people to pay more taxes you need to talk about tax fairness as well. We are going to have to do something to convince people that the tax system is more fair. Knight said that Alabama is just one of very few states to still tax food at the grocery store.

Melton’s bill includes cost of living adjustments every three years so the minimum wage would increase over time with inflation.

State Representative Patricia Todd (D-Birmingham) said, “There is no city in America where a person can afford market rate rent living on minimum wage.”

Rep. Todd said that her bill is an increase in the tax on tobacco products.  Todd said in a written statement that her Tobacco Tax Increase (HB45) would increase the tax on cigarettes by $0.32.5 (from $0.42.5 to $0.75 per pack). The Legislative Fiscal Office estimates this bill would generate an additional $20 million in new revenue.

Rep. Todd said in a written statement, “This is just common sense. It’s one step to make the State healthier and generate millions of dollars for the budget. The increase we are talking about will still keep the price of a pack of cigarettes at the same price as neighboring states, so it will allow Alabama businesses to remain competitive. We have a real chance of passing this bill.”

Todd’s tobacco tax increase is much smaller than the one proposed by Alabama Governor Robert Bentley (R).

State Representative Marcel Black (D-Tuscumbia) said that his bill would expand Medicaid. Rep. Black said that that helps people who are working every day; but don’t make enough money to afford healthcare. “We are going to lose our rural hospitals, which means we are going to lose our doctors, which means we will lose our pharmacies.”  You will have to travel to the cities to get health care without Medicaid expansion.

Rep. Artis A.J. McCampbell (D-Livingston) said there is a woman in my district who is 39 years old. She has a chronic hypertension problem and is not earning enough to pay for health insurance. She can’t afford her medication so is taking just one pill a week so she can pay for food and rent.

Rep. Rod Scott (D-Fairfield) said, “We are going to present a package of six bills closing corporate loop holes will generate $60 million.” Scott said that the loopholes they would overturn give an unfair advantage to a specific group of corporations that are not paying their fair share.

Rep. Adline Clark (D-Mobile) said, “I am in full support of our agenda.”

Rep. Barbara Drummond (D-Mobile) said that this package helps real people with real needs. Drummond said that she just talked with, “Several people in our court system who are going to lose their jobs because they (the courts) don’t have enough money.”

Rep. Louise Alexander (D-Bessemer) said that she supports the minimum wage bill. “It is right and just that they make enough wage to take care of their family.”

State Rep. Craig Ford said, “We are proposing two bills that allow the voters to vote on creating a State lottery. The first lottery bill would allocate the proceeds generated towards scholarships for students who make the A/B Honor Roll. The second lottery bill would allocate the proceeds to the state’s General Fund budget for the State’s Medicaid agency. Either lottery could generate up to $280 million annually.”

Minority Leader Ford said, “Before we even consider raising taxes we need to let the people vote on a lottery. For far too long Alabamians have been sending our hard-earned dollars to neighboring states. It’s time to let the voters decide on if we want a lottery and where we want those funds to go.”

Rep. Ford said, “We do have gaming in Alabama.  We have four dog tracks and two casinos.”

Ford said that the Democrats are also going to introduce a House joint resolution calling on Governor Bentley to enter into good faith negotiations for a trial State compact with the Poarch Creek Indians.

Rep. Thomas Jackson (D-Thomasville) said in a written statement, “The Poarch Creek Indians (PCI) are here, and they aren’t going anywhere. This is a win-win solution for everybody. The state gets the money it needs, and the Indians get to expand their operations.”

Ford said that there is language in the bill that would allow the four dog tracks to have the same privileges and rights that the compact would give PCI.

Rep. Ford said, “We can’t sit on the sidelines and do nothing for a year.”

Rep. John Knight (with the Alabama Legislative Black Caucus who brought the case) said, “I am not at liberty to discuss the case, but the Supreme Court did not declare anything unconstitutional.”

Knight said that the legislature has a responsibility to do what is best for the State.

Rep. Knight said of the case, “We are going to litigate that in court. Whatever happens…happens.”

The Alabama Political Reporter asked that some of our legal analysts have suggested that it is possible that if the redistricting is thrown out that the court could declare any actions by this legislature null and void.

Rep. Marcel Black said that in the past when this has been done with congressional districts they didn’t stop Congress from continuing. Rep. Black said that he is not aware of any case where the court did that.

Rep. Craig Ford said, “With the numbers we have we have to work in a bipartisan way.”  They had been waiting for action by the Republicans but they have not seen any real leadership. Ford said that they didn’t want anyone to say there was no Democratic plan.

Ford said that he wants to work with the governor on his plan. The House Democrat plan however is a voluntary plan that will solve almost 50 to 60 percent of the needs outlined by the Governor.

Rep. Darrio Melton said, “Many of my (Republican) colleagues would admit that it is shameful that we have a $7.25 minimum wage.”  Melton said “The Governor has worked with us on the corporate loopholes.”

Rep. Ford said, “I have had a lot of Republicans say they want to vote for the lottery they just don’t want to sponsor it.”  Ford said that in 1998 the lottery failed by a slim margin.  “The governor at the time had a lot of pork in the proposal and that is why it failed.”