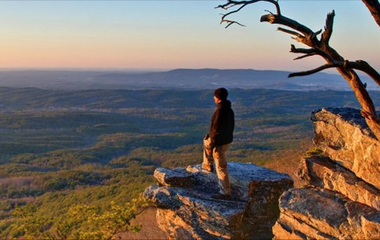 Wednesday, April 15, after running a campaign touting his successful record of cutting taxes and downsizing government, Alabama Governor Robert Bentley (R) shocked his supporters by proposing hundreds of millions of dollars in tax increases on the people of Alabama without giving the voters any opportunity to vote his package up or down.

A legislature that is dominated by conservative Republicans has thus far been reluctant to move Gov. Bentley’s tax bills. An increasingly desperate Gov. Bentley has responded by threatening to call special sessions forcing the legislature to come back to Montgomery until they relent and give him the money that he demands.

On Tuesday, April 15, State Parks Director Lien threatened to start closing State parks as early as May 1, unless the legislature caves in on Gov. Bentley’s demands for tax increases. Under director Lien’s plan, 15 of the 22 parks would close.

State Senator Clay Scofield (R-Arab) responded on Facebook, “A letter was sent out by the Alabama State Parks director Tuesday that said 15 State parks including Lake Guntersville State Park would be closed. Over the past four years, no other legislator has fought harder for our State parks than me and that is not going to change. I am committed to fight for our State parks, especially those in Senate District 9, and I will do everything I can to keep them open. Lake Guntersville State Park has a huge economic impact on Marshall County, and I urge our citizens to join me in this fight. I will be meeting with Governor Bentley on Thursday to propose my solutions to fix the funding problems associated with the park system. Solutions that I have proposed for the PAST TWO YEARS. Again, I am committed to keeping Lake Guntersville State Park open, and I hope that you will join me.”

State Representative Mack Butler (R-Rainbow City) replied to the Parks announcement, “It’s a threat trying to get everyone to pressure their Rep. to raise taxes. We are still exploring ways to shrink government and eliminate waste. Stay tuned.”

An estimated 300 state Parks employees would be let go under the administration’s plan. The parks will lose $10 million in funding in a proposed budget that has been introduced.

Former State Senator Scott Beason (R-Gardendale) has urged the public to not give in to demands for more taxes.  Sen. Beason said in a recent statement, “We should not be so hasty about raising the taxes we don’t pay. After all, avoiding tax increases on ourselves by supporting taxes on others doesn’t sound quite so virtuous when we say it slowly, does it? Alabama taxpayers should circle the wagons and fire outward at the tax-raisers instead of inward on our fellow conservatives for a change.”

Most sources agree that the state faces a $261 million shortfall in the State’s troubled General Fund. The biggest part of that is a $110 million increase in the estimated cost of providing Medicaid services. Health care costs have risen exponentially since Obamacare was passed. Rather than standing up to the Obama Administration and cutting Medicaid benefits or charging copays the Bentley Administration has come up with a massive package of tobacco tax, insurance tax, utility tax, automobile sales tax, automobile rental tax, etc. increases.