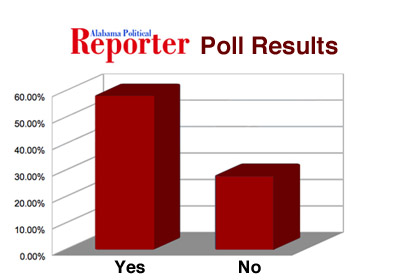 MONTGOMERY—A statewide poll commissioned by the Alabama Political Reporter shows Governor Bentley is still very popular, but not as popular as a vote on a lottery and Las Vegas-style gambling. Governor Bentley’s biggest weakness may very well be his plan to raise taxes, a plan overwhelmingly disfavored by Alabama voters.

Three competing plans to address the State’s budget crisis are on the table.

Speaker Mike Hubbard wants to raise taxes in the $100-200 million range, as well as give an exclusive gambling monopoly to the Poarch Creek Indians for Las Vegas-style gambling at their three locations.

Senator Del Marsh rejects the idea of raising taxes, and instead, looks to implement a lottery and expand Las Vegas-style gambling to the three Indian locations and the State’s four existing racetracks.

Alabama voters were asked about the popularity of Bentley, Marsh, and Hubbard, as well as questions about tax increases and gambling. The results of the survey conducted from May 6-8, including the full text of the questions and the topline results, is available at the link below:
SEE POLL

The APR poll found Governor Robert Bentley has a very comfortable favorability rating of 56.1 percent, with just 24.8 percent finding the Governor unfavorable. Despite the relentless assault from some on the right over the Bentley plan to raise taxes, he remains a very popular figure with voters.

Del Marsh remains relatively unknown to Alabama voters statewide. However, Marsh’s 26.6 percent favorable rating is enough to keep him in the positive range with voters. Only 19.2 percent of voters have an unfavorable opinion of the Senator from Anniston.

The news was not good for Hubbard, whose favorability rating is actually in the negative in the wake of persistent media reports of his pending criminal trial in Lee County. Once largely considered the presumed Republican nominee for governor when he decided to take his shot at the Perry Street mansion, voters have soured on Hubbard. Hubbard is the only one of the three Republican power players to have a negative favorability rating. A hefty 34.6 percent of voters have an unfavorable view of the Speaker from Auburn. Only 28 percent of voters view Hubbard favorably.

The poll showed a strong plurality favored increasing gambling over cutting the budget, raising taxes, or some combination of the three. Almost half, 45.8 percent, preferred increasing gambling in Alabama, with just 12.5 percent preferring a tax hike and 16.5 percent opting instead for cutting the budget. Just over a quarter, 25.1 percent, opted for a combination of two or more of the three options.

Only 13.9 percent agreed with Hubbard that Las Vegas-style gambling should be restricted to State’s three Indian facilities.

Ultimately, Marsh’s plan must be put to a vote of the people to be implemented in Alabama. Voters would overwhelmingly approve a constitutional amendment to legalize and regulate a lottery and Las Vegas-style gambling at the three Indian reservations and four racetracks.  The yes vote leads by more than 30 percent in what amounts to a near-mortal stranglehold over the no vote, with 58.5 percent saying they would vote yes on Marsh’s plan and only 28.2 percent saying they would vote no.

Bentley is still very popular in Alabama, just not as popular as Marsh’s plan for a constitutional amendment to bring a lottery and seven Las Vegas-style casinos to Alabama.

However, both Bentley’s plan and Hubbard’s plan are hugely unpopular.