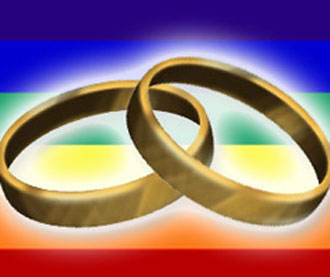 Wednesday, June 3, the House Judiciary Committee considered what the response will be from the State of Alabama when (as almost everyone expects at this point) the US Supreme Court rules that Alabama’s restriction against same sex marriage is unconstitutional.

Albritton said that currently you go to the Probate Judges office to get a marriage license from the state of Alabama, this bill just removes the licensure part out of the process. This bill does not de-sanctify marriage, because the state can not sanctify marriage. Albritton’s bill would make it where you simply fill out a form with the signatures of the two people being married, the person performing the procedure, and two witnesses.

Sen. Albritton said that there are three versions of this bill: the version originally passed by the Senate, the first substitute which is favored by this body, and a second substitute written by Albritton. The conservative Senator said that he had problems with the first substitute because itt keeps the licensure process and the second problem with it is that it does not state that it does not affect any other domestic law. “I have prepared my own substitute that goes a little farther. We are running out of time…There is no secret as to what is going on upstairs (in the Senate where many of whom want to leave and shut the session down early)…The Supreme Court is going to make a ruling very shortly. What I am trying to accomplish is to fix the chaos that we have now. If SB377 is passed then the State will go smoothly into this without further litigation. My goal is not to protect a group my goal is to protect the State.”

House Judiciary Committee Chairman Mike Jones (R-Andalusia) asked the committee which of the three version it would like to make a motion on.

State Representative Jim Hill (R-Odenville) said that he would like to make a motion to give a favorable report ton substitute number two.

That motion was seconded by Rep. Paul Beckman (R-Prattville).

Rep. Thad McClammy (D-Montgomery) asked Beckman what happened to the bill we passed out of this committee, HB56 sponsored by Rep. Hill.

HB56 would have established a freedom of conscious right for judges to refuse to marry anyone if that marriage violated their deeply held religious beliefs.

Sen. Albritton said, “HB56 is not close to passing (in the Senate).

Albritton warned that without his legislation that some individuals are determined not to go along (with any court ruling on same sex marriage) and we will be in litigation hand over fist.

Rep. Christopher John England (D-Tuscaloosa) asked, Are we concerned that the Supreme Court is going to rule in favor of same sex marriage and are afraid that people won’t follow the ruling?

Albritton said that purpose of his bill is to get the state out of when marriage occurs.

Sen. Albritton said, “My goal is not to create more criminals or more litigation.”

Rep. Marcel Black (D-Tuscumbia) said that judges take an oath to uphold the law there is currently no discretion currently for that ministerial function of the court. It concerns me that in anticipation of a court ruling that may not be agreed to we expect people to break the law. That disturbs me.

Sen. Albritton said, “We as a body have an opportunity to prevent putting people in a difficult position, Even if the Supreme Court rules in favor of Alabama law this bill is still the right thing to do.”

Sen. Albritton said other states are looking at this also.  “I think this is an appropriate path for the people of Alabama. Oklahoma has a bill in the same stage as Alabama.”

Faulkner said I was wondering if the term civil union would not be more appropriate. Marriage can be a sacrament. Was that considered?

Sen Albritton said, “That was not considered appropriate because it did not comply with Alabama law.”

Chairman Jones asked if this changes the legal requirements for marriage.

Albritton said, “All those legal requirements remain in effect.”

Rep. Matt Fridy (R-Montevallo) said, “I really have struggled with this bill. I understand the goal of this is but persons with deeply held religious views would still be required to sign off on same sex marriage when the paper is filed at the probate judge’s office. Is this what we want the the law to be? I am a firm believer that you don’t tear down a fence until you understand why it exists. We don’t know what the Supreme Court is going to go.” Fridy suggested that if the Court ruled against Alabama law that the legislature could still act in a special session. “We know that we will be in a special session.”

Chairman Jones said we are one of the few remaining common law marriage states.  How does this affect that?

Rep. England said what stops someone from refusing to record the contract?  This is a bill that ultimately may not be necessary.

Rep. Merika Coleman-Evans (D-Midfield) said that the bill was “Irresponsible” and that there is the possibility of “unintended consequences.” Coleman-Evans thought there was a possibility that Alabama could be embarrassed nationally by this.

Sen. Albritton said that divorce, child custody, common law marriage are excluded and would not change.

After a lot of discussion the committee concluded that it would not affect the definition of incest which is in the Alabama criminal code.

The committee vote 3 to 8 on favorable report.

SB377 will not be passed in this legislative session.