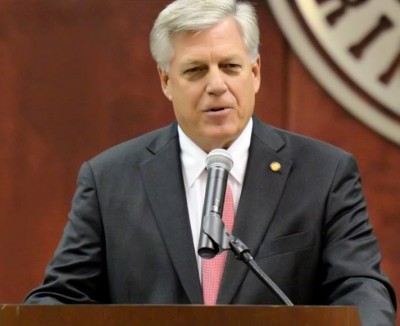 On Tuesday, June 9, State Senator Gerald Allen (R-Tuscaloosa) said in a Facebook statement that he is not giving up on legislation that would allow gun owners to take their loaded weaponry with them in their vehicles whether or not they have a concealed carry permit. Sen. Allen was the sponsor of Senate Bill 14 which would have given Alabamians the right to travel the roads with our loaded firearms if a need for lethal force should arise.

Sen. Allen wrote, “SB14 failed to get a vote in the AL House of Reps last week. However, I will continue my efforts to pass this bill in the 2016 Legislative session. I believe in the fundamental right of law abiding Alabama citizens to self defense while in his/her vehicle. A vehicle is extension of your home and you should have the right to defend yourself in your vehicle without having to buy a pistol permit.”

Under current State law, every lawfully owning gun owner may keep their weapon with them in their automobile; but it must be out of reach, locked in a box, unloaded. Alabama is an open carry State, meaning that it is perfectly legal to go to town with your gun strapped to your hip where everybody can see it. However, it is not legal to have that firearm with you on your person in your car, unless you have purchased a concealed carry permit from your local sheriff’s office. Presently, to be legal, citizens who open carry without a permit have to take that weapon out of it’s holster, unload it, and put in a locked box, away from reach like a trunk, then reverse the process to leave the vehicle. This rather strange way of doing things was the result of compromises in the 2013 Omnibus Gun Bill. Most gun owners recognize that there are difficulties with this regimen and purchase the concealed carry permit.

This is where the problem is: The Alabama Sheriff’s Association is concerned that allowing lawful carry in automobiles could lead to more road rages incidents and more armed confrontations with motorists as well as fewer concealed carry permits sold and a loss of revenue for the Sheriff’s departments. Alabamians hold more concealed carry permits per capita than do residents of any other state so this is not an inconsequential amount of money.

SB14 advocates, like BamaCarrry, argue that this is not true. People that lawfully carry now will renew their permits to keep the option of carrying concealed, they argue.

This year the bill passed out of the Senate; but languished in a House Committee for weeks. Time and the Senate where it waited for weeks to get out of committee. It finally did, but the leadership kept it from getting to the floor of the Alabama House of Representatives.