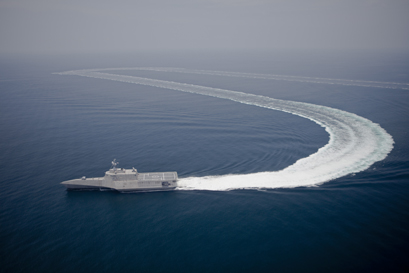 Saturday, June 13, Austal hosted the christening of America’s newest Littoral Combat Ship, the USS Gabrielle Giffords.  LCS 10 is the third US Navy vessel to be christened at Austal’s Mobile, Alabama shipyard in 2015.

The ship is named after former Arizona Congresswoman Gabrielle Giffords from Tuscon, who almost lost her life to an assassin’s bullet in 2011. The former Congresswoman joined her husband, retired Navy Captain Mark Kelly, and ship’s sponsor Dr. Jill Biden in celebrating the christening of the future USS Gabrielle Giffords (LCS 10) Mobile, Alabama. This is the third littoral combat ship (LCS) in Austal’s 10-ship, $3.5 billion block-buy contract.

Secretary of the Navy Ray Mabus announced the name of the ship during a ceremony held at the Pentagon in February 2012. Secretary Mabus said then, “The Navy motto is Semper Fortis, Always Courageous.  Unwavering courage has defined the Navy for 236 years and it is what we expect and what we demand of our sailors every single day. So it is very appropriate that LCS 10 be named for someone who has become synonymous with courage and who has inspired a nation with remarkable resiliency and showed the possibilities of the human spirit.”

Austal USA president Craig Perciavalle said, “I think I speak for Austal’s entire shipbuilding team when I say that we are excited to be building a ship named after such an amazing person. Gabrielle Giffords’ courage and tenacity in the face of adversity is well-represented in the short history of the Littoral Combat Ship program.”

The USS Gabrielle Giffords is the newest Independence class littoral combat ship (LCS).  The 127-meter (419-foot) aluminum trimaran is capable of being outfitted with reconfigurable payloads (mission packages) which can be changed to support mine countermeasure, anti-submarine and surface warfare missions.  It is only the sixteenth US naval ship to be named for a woman and only the thirteenth since 1850 to be named for a living person.

The wife of Vice President Joe Biden, Dr. Jill Biden was in Mobile for the christening ceremony. According to original reporting by the Alabama Media Group’s Kelli Dugan, The Second Lady said that the ship is an, “Amazing feat of engineering excellence” and that she is humbled to serve as an honorary crewmember for life.  Mrs. Biden said that former Congresswoman Giffords, “Is here today because she refused to let tragedy overshadow the ideals that define her,” including the honor, courage and commitment the Navy embodies.

Dr. Biden is a mother, a grandmother, a career educator and the author of a children’s book, “Don’t Forget, God Bless Our Troops,” released in June 2012.

Austal USA president Craig Perciavalle said, “I’m proud to say that Austal’s workforce shows the same commitment and dedication that both of these women representing this ship have demonstrated throughout their careers, growing exponentially in a short period of time completing milestone after milestone making Austal highly successful and the largest private employer in south Alabama.”

Independence class LCS’s have a maximum speed in excess of 40 knots. According to Austal, the Independence-variant combines superior seakeeping, endurance, and speed with the volume and payload capacity needed to support emerging missions – today and in the future. The ship was launched in February and is making preparations for trials and delivery in 2016.

On Thursday June 11 Congressman Bradley Byrne (R-Montrose) voted in favor of HR2685, the Department of Defense Appropriations Act of 2016. The bill includes funding for three more Littoral Combat Ships (LCS), which are built in part by Austal USA in Mobile.

US Representative Byrne said in a statement: “It is clear that support for the Austal-built Littoral Combat Ship is continuing to build on Capitol Hill. These ships are vital to the success of our Navy around the globe, and more and more Members of Congress are starting to realize why the Navy is so supportive of them.”

Rep. Byrne was critical of Senate Democrats who have threatened to block the defense funding bill in order to seek increased spending for non-defense programs and agencies.  Rep. Byrne said, “It is reprehensible for Senate Democrats to threaten to block vital funding for our nation’s military men and women just because they want agencies like the EPA and IRS to have more money. Our nation faces a wider range of threats right now than we ever have before, and it would be horribly irresponsible for us to put the safety and security of Americans at risk because some want more federal spending on things completely unrelated to defense.”

The House passed the Defense Appropriations Act by a bipartisan vote of 278 to 149.

Over 400 naval and shipyard guests attended the ceremony at Austal’s waterfront facility on the Mobile River. Assistant Secretary of the Navy for Energy, Installations and Environment Dennis V. McGinn was the principal speaker at the event.

Austal USA has seven ships under construction at this time. Jackson (LCS 6) is preparing for acceptance trials the week of June 22. Montgomery (LCS 8) is preparing for trials and delivery later this year. Final assembly is well underway on Omaha (LCS 12) and Manchester (LCS 14). The Modules for Tulsa (LCS 16) and Charleston (LCS 18) are under construction in Austal’s Module Manufacturing Facility.

Nearly 86 percent of those surveyed rate traffic congestion on the Bayway and through the Wallace Tunnel as bad or very bad during peak...