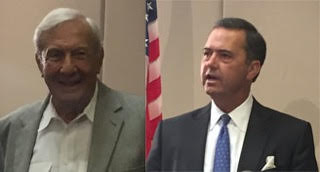 In an effort to answer the State’s need for long-term financial stability, former Auburn University Head Football Coach and Athletic Director Pat Dye, retired CEO of Alabama Power, Charles McCrary, and Raymond Harbert, Chairman and CEO of Harbert Management Company, have come together to form the Alabama Jobs Foundation, to promote passage of a Constitutional Amendment that would create jobs, and increase revenue for the State, by bringing a lottery and casino gaming to Alabama.

The trio is committed to the passage of a Constitutional Amendment based on an omnibus gambling plan proposed by Senate President Pro Tem Del Marsh (R-Anniston). The plan would allow Class III gaming at the four existing dog tracks: the Birmingham Race Course, Victoryland, Greene Track, and the Mobile Greyhound Track.  It would also include a statewide lottery and would urge Gov. Robert Bentley to negotiate a compact with the Poarch Creek Band of Indians (PCI) to allow the Indians to have Class III gaming. A study conducted by AUM says the plan would create 11,000 new jobs for Alabama families, have an economic impact of $1.28 billion on the  economy and generate more than $400 million annually in new State revenue.

The Foundation’s activities will include recruiting additional business leaders to the group, staffing and operating the Foundation, lobbying members of the Alabama Legislature, and funding advertising and public relations campaigns to educate voters.

McCrary says the Marsh plan would not only spur economic growth, but make Alabama a “Destination State” for more people. “Yes, it is a destination for the beaches and all of that, but this could make Alabama a Destination State where they come here instead of just drive through to go buy a lottery ticket in our surrounding states, or go to a casino in the surrounding states. We want to keep our money here.”

According to a report in the Mississippi Sun Herald, a third of those traveling to casinos in Mississippi come from Alabama, Georgia, and Florida.

McCrary also points out that the State has already approved gambling in the location identified in Marsh’s plan, but the State is not seeing the potential benefits.

Both Dye and McCrary agree, that the upside of the gaming issue far outweighs the negatives.

“If you look at it realistically, the pluses outweigh the minuses,” said Dye. “The first thing that you hear from somebody that doesn’t agree with gambling is that it preys on the poor. That may be true to a certain extent, but the guy that it preys on that is going to gamble, anyway…People that gamble are going to gamble. They will find a place to do it, or go across the line to Mississippi, or go buy lottery tickets in Georgia, Tennessee, or Florida. They are going to gamble. But, you know if we’ve got gambling in the State of Alabama, and are getting revenue from it, his children will get to benefit from that and so will the children of his community.”

McCrary echoes Dye’s sentiment, “I want to keep Alabama’s money here. There are a lot of people here, that drive to our border states [for gaming] and our money goes outside the State.”

He also points to the fact that Marsh’s plan lets the people decide, rather having politicians make the choice. “The Marsh Plan doesn’t establish anything. It simply says, ‘Let’s let the people vote.’ Don’t we have confidence in the people of the State of Alabama to let them vote and let them decide whether they see the same opportunity as I do, and Coach Dye does, and a host of other people do. If they don’t see it so be it.”

A passionate Dye said, “I have travelled this state from one end to the other as an assistant coach recruiting for Alabama in every kind of home, every kind of projects, every kind of community and small towns in the Black Belt and the big cities and to all kinds of families. The one thing that I have learned is that you can find good people everywhere.”

Dye has discussed his opinion with Speaker Mike Hubbard (R-Auburn), “I went to Mike [Hubbard] first and told him where I stood. I called Del and talked to him extensively and said that everything I can do Del, I will do. If you want to have Town Hall meetings I will travel all over this state.”

Dye says he understands that Gov. Bentley has resisted letting the vote come before the people, but with a smile, said, “people can change there minds.”

To this end, the Foundation plans to raise awareness of the issue with the goal of seeing a Constitutional Amendment passed in a Special Session, and bringing it to a vote of the people as soon as possible.

Dye says, he is indebted to the people of the State for making his dreams come true, and that he wants to see all of the State’s children have an opportunity to live out their dreams, as well.