Monday, August 3, House Ways & Means General Fund Chairman, Steve Clouse (R-Ozark) told reporters that he, and other lawmakers, were introducing a package of tax increases, in order to close much of the shortfall in the troubled State General Fund budget.

The Clouse plan is a much-less-reduced version of the latest Bentley plan. Where Bentley would raise taxes by over $300 million, Clouse’s package of bills totaled just $173 million.  Clouse said that his plan would fund Alabama’s troubled Medicaid program, fund corrections, implement costly prison reforms, and fund mental health, and other agencies.  The remaining agencies would takes a simple 5.5 percent cut across the board.

Chairman Clouse’s pro-government coalition would adopt Gov. Bentley’s hike in the Business Privilege tax, generating $50 million by hitting the most successful businesses in Alabama much harder, while altogether exempting most very, small businesses.

Clouse is promoting a 25 cent a pack increase in the price of a pack of cigarettes.  Rep. Clouse said that he was not raising taxes on cigars, since much of that is sold over the internet, and isn’t taxed anyway.  His tobacco tax also would not extend to e-cigarettes or other vapor products. The Representative from Ozark said that he did not know how much of that is out there.

The Governor’s plan raised $70 million in additional tobacco tax revenue, “Ours is 66 million.”

Clouse said, that Rep. Beckman is carrying the bill to take away the FICA deduction.  This measure would cost hundreds of thousands of Alabamians to pay more income tax to the State government.  Since Social Security is capped, this would be a much, harder hit, proportionally, for typical Alabama wage earners than it would be for upper income Alabamians, whose FICA tax is capped out.

Clouse spoke to a number of House members trying to gauge what they would support.  He has not spoken with members of the State Senate because he is concentrating on the House members.  Clouse did speak with some of the Governor’s people, but has not actually spoken to Governor Bentley himself.

The House Ways & Means committee is expected to vote on these controversial proposals as early as Tuesday, to send the unpopular measures to the floor of the House as rapidly as possible.

The House in its 20 minute session on Monday waived the 24 hour rule in order to speed up this process.

Republicans were elected because they promised not to raise taxes and to finally right-size State government to match the revenues that the State actually has. Apparently, many in the House believe that they can break those promises without suffering the basic consequence and political fallout of losing voters.

Reporters asked Chairman Clouse about statements from Senate President Del Marsh (R-Anniston) asserting that there is no support in the Senate for this tax increase package. Clouse said, “The Senate will have to do what they have to do, I can’t worry about that.”

The Clouse plan would also transfer some of the Use tax from education to the troubled General Fund.  Clouse did not mention the gambling options that are open to the State.

Many conservative groups are threatening primary challenges to GOP lawmakers that raise taxes to promote more government spending.  Many in the GOP worry that the legislature could hurt the Republican brand by defying voters on taxes after campaigning on a limiting government platform.

“Alabama State government does not have a revenue problem. Alabama State government has a spending problem.”  “Just received this: August 3, 2015, Monday: A bill will be introduced in the Alabama Legislature to take $225 million from Education to fund unnecessary growth in prison and Medicaid expenses. This will be a permanent move if passed. This is being done to set the stage to replace the lost ed dollars with an Education Lottery. They fear the Anti Gaming activists in Alabama mustering the fortitude to fight back the Growth in Alabama’s government we have warned about. If you give more money to the General Fund, you will get more government, and if you steal it from K-12, that is a bad idea. If it is taken from Higher Ed, that is not so bad if you want to grow government. I prefer neither. Let’s get spending under control and properly fund K-12.”

There are only eight calendar days left in this Special Session.

Chairman Clouse joked that we might have to have prayer services here on Sunday. 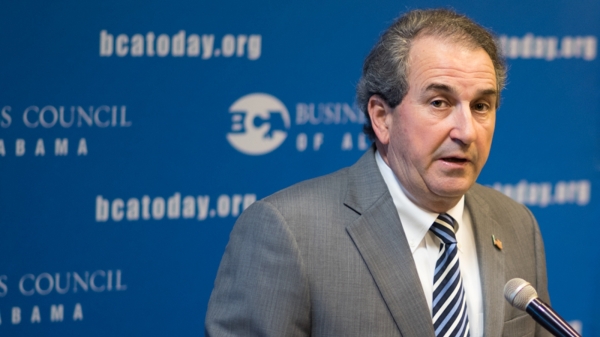