Judge Hobbs ruled that the plaintiffs were not harmed by the removal and had no standing to sue.

The Confederate Heritage groups Save Our South issued a statement following the decision.  The group wrote:  “If Judge Hobbs thinks that no one was harmed by the taking down of the flags, he needs to understand that descendants of Civil War Veterans are upset that their Veterans are no longer considered important or worth honoring by the State of Alabama and by Governor Bentley. This is about American History and if the State of Alabama and/or the Governor can re-write history at the drop of the hat, whose history is next to be re-written.”

State Auditor Jim Zeigler (R), who last month claims credit for a forced return of Confederate mementos to the capitol museum gift shop, said that he is now, “Researching a different strategy to return the flags to the soldier’s memorial.”

Hastings said on Facebook, “Bentley has said the reason he removed it (the Confederate flags) was because he didn’t want any distractions. And he has stated he wanted to be the first Governor to remove the Confederate Flag. I hate that a bunch of wimps are using this Flag to promote their agenda. I guess it doesn’t matter to them that about 300,000 Americans died while fighting under this Flag. Courage award my ASS!”

On Wednesday, June 24 Alabama Governor Robert Bentley (R) ordered all Confederate flags to be removed from state grounds. There was no vote of the people, no public hearings, no court case, no vote of the Alabama Legislature.  Gov. Bentley just gave the order and workers began immediately removing all the Confederate Flags including their polls from Confederate Memorials in Montgomery. There was no fanfare, no ceremony, no bugler, no reverence for history or moment of silence as the flags were taken down.

According to original reporting by the Alabama Media Group, Gov. Bentley said “This is the right thing to do. We are facing some major issues in this state regarding the budget and other matters that we need to deal with. This had the potential to become a major distraction as we go forward. I have taxes to raise, we have work to do. And it was my decision that the flag needed to come down.”

24,559 people have signed on online petition asking that the flags be placed back at the Confederate Veterans Memorial.

State Senator Gerald Allen (R-Tuscaloosa) has introduced legislation, SB 23, to protect monuments around the state from politically correct historical revisionism.  The bill would, “Create the Alabama Heritage Preservation Act of 2015.  This bill would prohibit the relocation, removal, alteration, renaming, or other disturbance of certain commemorative statues, monuments, memorials, or plaques which are located on public property, or the relocation of grave sites with historical significance.  This bill would prohibit any person from preventing the governmental entity having responsibility for maintaining the objects from taking proper measures to protect, preserve, care for, repair, or restore the object.”

The bill has been referred to the Senate Finance and Taxation General Fund Committee chaired by Sen. Arthur Orr (R). 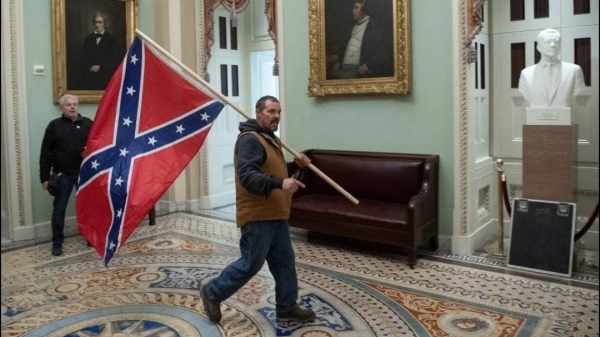 Kevin Seefried and his son, Hunter, face multiple charges connected with their alleged part in the deadly Capitol riot.