The people of east Alabama have elected me ten different times to serve in the Alabama Legislature. It has been a tremendous honor to serve as a citizen-legislator, first in the House of Representatives and now in the State Senate. I love this state, am proud to call it home, and believe Alabamians are some of the best folks in the entire country.

Therefore, it has been painful to see our state mocked in the national media the past few months, as several of our elected officials have made unwise decisions that do not reflect well on their character. At church, the grocery store, and local restaurants I have talked to many people who, in despair, wonder aloud if all politicians are corrupt, incompetent, or a combination of the two.

I want to assure you: most people who serve in the Legislature are there for the right reasons. We want to improve our state and protect Alabama’s freedoms from an encroaching federal government. Quietly, away from the headlines about political corruption, there is good work being done for our state.

During this past legislative session, I helped secure funding for the Alabama Ahead Act, which will connect every school in our state with high-speed wireless Internet infrastructure. Alabama will be among the first states in the country to have wireless Internet at each of its K-12 schools. The state of Alabama will invest $15 million for the project, to be matched by $83 million in federal funds.

I am honored to serve as chairman of an oversight committee comprised of legislators and educators that will guide the implementation process of the Ahead Act (my co-chair will be Senator Jim McClendon of Springville, another champion for the movement). I am excited about the learning opportunities the Ahead Act will make possible in our classrooms. A high school economics class could Skype with entrepreneurs to learn the basics of starting a business. A geography/world history class could interact via text and video chat with peers at a school in Kenya. The possibilities are nearly endless!

I am also privileged to serve as a member on the Armory Commission of Alabama, which oversees and manages the facilities and buildings of the state’s National Guard units. In 2014, Alabamians approved a $50 million bond issue to refurbish our National Guard armories so our Guard members can have a safe and healthy environment to work and train in.

Combined with federal matching funds, the state will have more than $75 million over the next three years to pay for facility upgrades at Alabama’s National Guard armories. This has been particularly exciting for me because along with Senator Tom Whatley of Auburn, I helped craft the legislation that made the 2014 bond issue possible.

Soon, ever K-12 school in Alabama will have wireless Internet, while the state has stepped forward to upgrade the facilities of our National Guard armories. The news headlines will focus on the mistakes a few politicians have made. While I believe we should hold our elected officials accountable, please remember that behind the scenes, many of your fellow citizens in the Legislature are working hard to improve our great state.

Gerald Dial represents District 13 in the Alabama Senate, which includes all or parts of Randolph, Lee, Cleburne, Clay, Cherokee, and Chambers counties. He serves as Chairman of the Senate Health & Human Services Committee. Gerald and his wife Faye reside in Lineville. 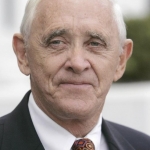