Trump said, “I have a message for all of you: the crime and violence that today afflicts our nation will soon come to an end. Beginning on January 20th 2017, safety will be restored.” “Decades of progress made in bringing down crime are now being reversed by this Administration’s rollback of criminal enforcement. Homicides last year increased by 17 percent in America’s fifty largest cities. That’s the largest increase in 25 years. In our nation’s capital, killings have risen by 50 percent. They are up nearly 60 percent in nearby Baltimore. In the President’s hometown of Chicago, more than 2,000 have been the victims of shootings this year alone. And more than 3,600 have been killed in the Chicago area since he took office. The number of police officers killed in the line of duty has risen by almost 50 percent compared to this point last year. Nearly 180,000 illegal immigrants with criminal records, ordered deported from our country, are tonight roaming free to threaten peaceful citizens.”

Trump warned, “The number of new illegal immigrant families who have crossed the border so far this year already exceeds the entire total from 2015. They are being released by the tens of thousands into our communities with no regard for the impact on public safety or resources.”

The New York City billionaire said, “Nearly Four in 10 African-American children are living in poverty, while 58 percent of African American youth are not employed. 2 million more Latinos are in poverty today than when the President took his oath of office less than eight years ago. Another 14 million people have left the workforce entirely. Household incomes are down more than $4,000 since the year 2000. Our manufacturing trade deficit has reached an all-time high – nearly $800 billion in a single year. The budget is no better. President Obama has doubled our national debt to more than $19 trillion, and growing. Yet, what do we have to show for it? Our roads and bridges are falling apart, our airports are in Third World condition, and forty-three million Americans are on food stamps.”

Trump also attacked the President’s controversial Iran deal and his handling of the Libyan Civil War, ISIS, and Syria.

Trump said, “Big business, elite media and major donors are lining up behind the campaign of my opponent because they know she will keep our rigged system in place. They are throwing money at her because they have total control over everything she does. She is their puppet, and they pull the strings.”

Trump said “I have joined the political arena so that the powerful can no longer beat up on people that cannot defend themselves. Nobody knows the system better than me, which is why I alone can fix it. I have seen firsthand how the system is rigged against our citizens, just like it was rigged against Bernie Sanders – he never had a chance.”

Trump said, “We must immediately suspend immigration from any nation that has been compromised by terrorism until such time as proven vetting mechanisms have been put in place.” “My opponent has called for a radical 550 percent increase in Syrian refugees on top of existing massive refugee flows coming into our country under President Obama. She proposes this despite the fact that there’s no way to screen these refugees in order to find out who they are or where they come from.”

Trump said that, ‘Decades of record immigration have produced lower wages and higher unemployment for our citizens, especially for African-American and Latino workers.” “We are going to have an immigration system that works, but one that works for the American people. “We are going to build a great border wall to stop illegal immigration, to stop the gangs and the violence, and to stop the drugs from pouring into our communities. I have been honored to receive the endorsement of America’s Border Patrol Agents, and will work directly with them to protect the integrity of our lawful immigration system.”

Trump said, “America is one of the highest-taxed nations in the world. Reducing taxes will cause new companies and new jobs to come roaring back into our country. Then we are going to deal with the issue of regulation, one of the greatest job-killers of them all. Excessive regulation is costing our country as much as $2 trillion a year, and we will end it. We are going to lift the restrictions on the production of American energy. This will produce more than $20 trillion in job creating economic activity over the next four decades. My opponent, on the other hand, wants to put the great miners and steel workers of our country out of work – that will never happen when I am President.”

Alabama Secretary of State John Merrill (R) said, “We were honored to stand with Senator Jeff Sessions as he delivered the Alabama delegation votes at the Republican National Convention in Cleveland! Tonight, Donald Trump formally accepts the nomination of our party to begin the campaign in earnest to become the 45th President of United States!”

Former Republican Party Chairman Bill Armistead said, “The convention is over and we have our ticket. Now down to the work of getting the Trump-Pence Republican ticket elected. I believe if elected these two gentlemen will turn our country around. God help us if we lose this election.”

Alabama Constitutional Conservatives organizer and Trump delegate, Deanna Frankowski said, “I will be voting for @RealDonaldTrump and I will NEVER, EVER vote for a grown man acting like a petulant child, YES that means you @TedCruz!!”

(Original reporting by Fox News and Politico contributed to this report) 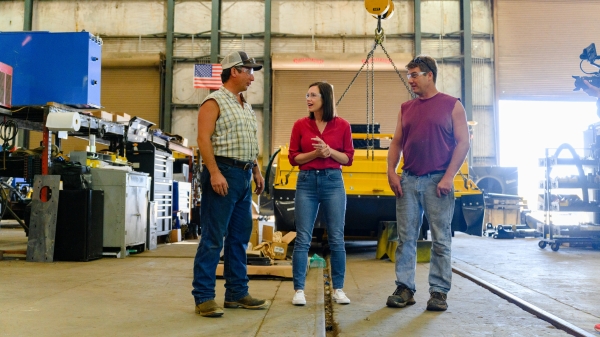 “I don’t need anyone else to fight my battles," Senate candidate Katie Britt said.