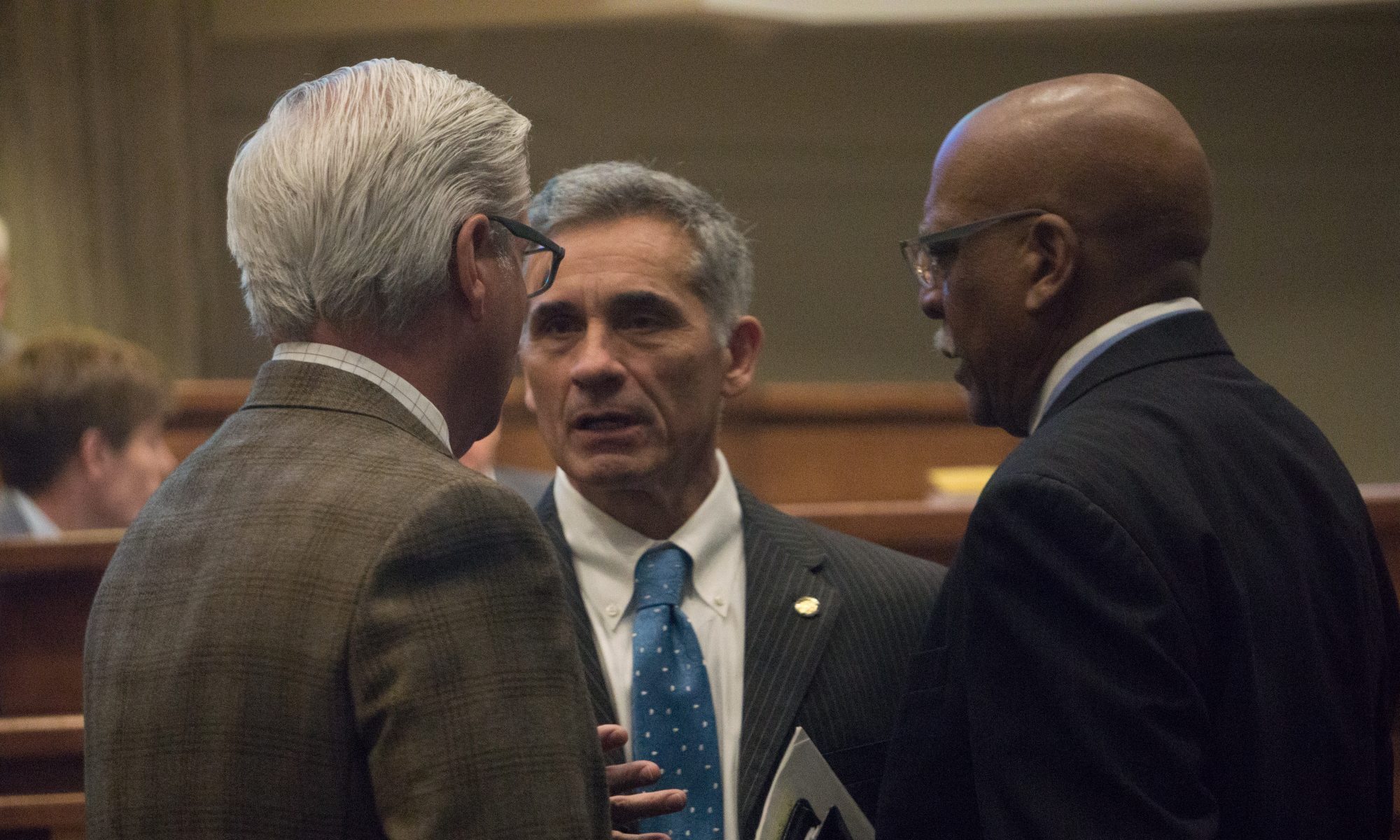 Sens. Joe Reed (left), Del Marsh (middle), and Smitherman talk on the Senate floor during a debate about the Education Budget in March 2018. (Samuel Mattison/APR)

The Alabama Senate managed to pass the Education Trust Fund budget on Thursday after a nearly 4-hour debate that threatened to derail its passage.

Thursday’s debate of the budget started off relatively calm with state Sen. Paul Bussman, R-Cullman, stating his problems with the bill but making no action to change the appropriations amount.

Bussman, in a bid to stall the budget last year, went line-by-line in the budget on a whiteboard he wheeled unto the floor. No whiteboards were present this year.

Instead, Sen. Bobby Singleton, D-Greensboro, took to the podium to challenge the appropriations for Alabama State University, which he says was unfairly targeted by the Bentley administration.

In his tenure, Gov. Robert Bentley started to audit ASU saying that some of their programs were not up to standards. Although his probe never found anything to take action on, the governor never formally cleared the institution and various programs faced being uncertified.

According to Singleton, the Bentley probe cost the university millions in lost revenue.

Singleton, mentioning former senator and ASU President Quinton Ross, said the state should increase the appropriations by millions in what he calls “reparations.”

ASU received a boost in funding in 2019’s budget like all universities in the state, but to some senators, the increases were marginal at best.

Singleton was one of those senators and proposed an amendment that would give $3.5 million to the institution. Wanting to move on with the budget’s passage, senators rejected his initial proposal.

After its failure, Singleton indicated that he and other sympathetic senators would begin to grandstand the bill and potentially set the Senate back by hours.

As Singleton began his filibuster, other senators, including some Republicans, joined him to speak about how they thought ASU was targeted by the Bentley administration.

State Sen. Dick Brewbaker, R-Montgomery, said the Bentley probe into ASU was “wrong-headed” and also expressed that he was interested in giving them some increased funds from the budget.

Nearly an hour and a half after the debate began, Singleton announced he would decrease his amendment to $1.2 million. The Senate accepted the proposal and passed the budget unanimously.

With Singleton’s new amendment, ASU’s budget will have increased by $3 million when compared to 2018’s budget. The institution’s appropriations are now $46 million.

The bill will now go to the House to be debated or concurred to the governor’s desk.