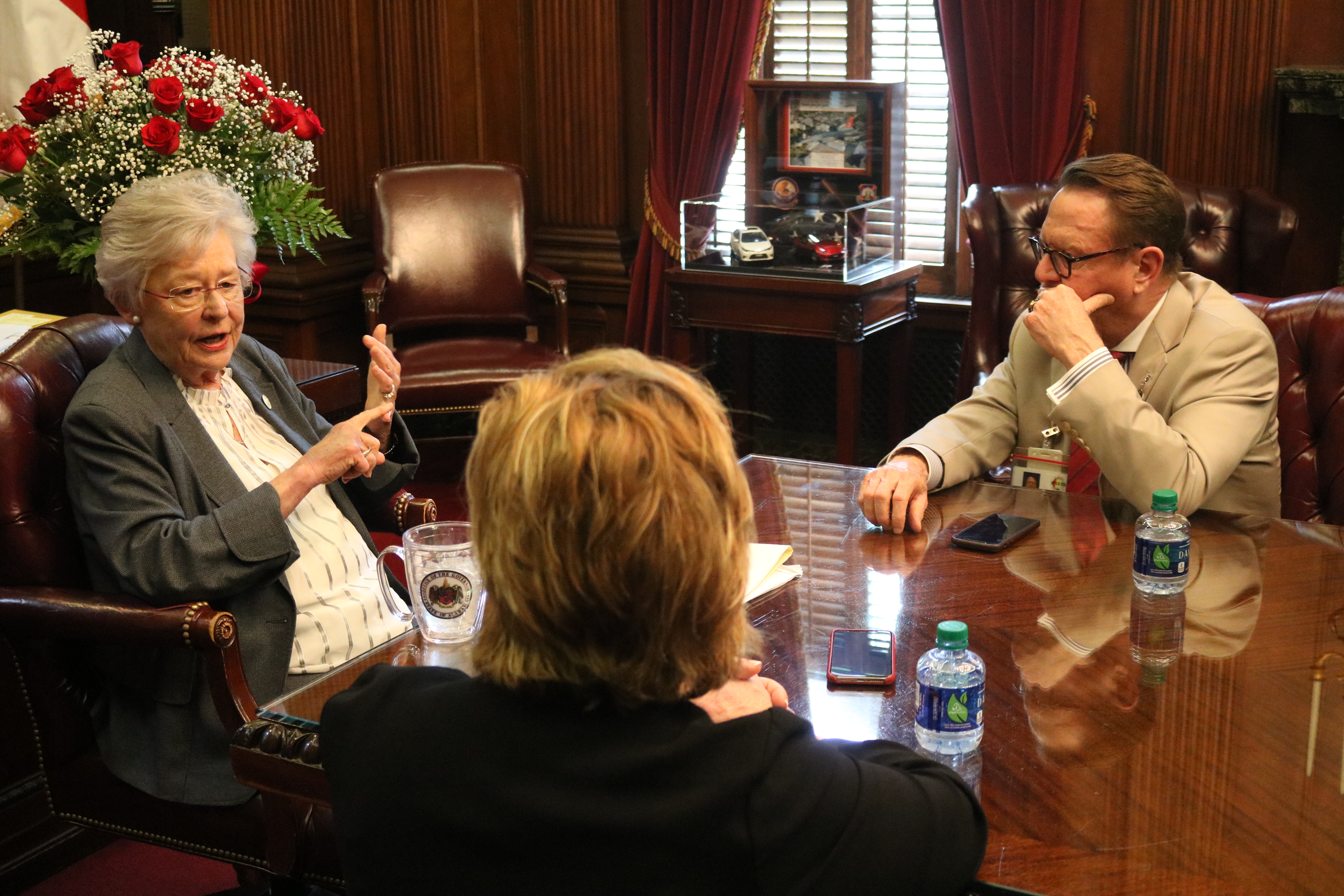 Earlier this week in an interview with the Alabama Political Reporter, Gov. Kay Ivey spoke on a range of topics including her first year in office, why she stands by controversial economic development bill HB317, and why calls for debates leading into the Republican primary is a stunt to draw attention away from the critical issues facing the state. She also shared her thoughts on ethics reform, offering a clear code of conduct and a surprising fix to selecting ethics commissioners in the future.

In a 40 minute conversation that, at times, moved from close tension to smiles, blushes and laughter, the 54th governor of Alabama laid out to APR why she serves, her complete trust in her cabinet and why she is running for four more years. Far from the gentle, grandmotherly image in her softly lit campaign commercial, Gov. Ivey is a tough, savvy politician who speaks her mind.

After taking the oath of office on April 10, 2017, Gov. Ivey promised to steady the ship of state and restore Alabama’s image. The governor says she feels her administration has come a long way toward fulfilling those promises.

“We certainly steadied the ship, and that had to occur,” said Ivey. “We had been under a dark cloud. The state had very little, if any, direction and people were disillusioned.”

She recalled that her first meeting after her swearing-in was with Secretary of Commerce Greg Canfield. “It was important to me to meet with him as the first meeting because I knew then as I know now – number one: how important economic development is to people. If you can find ways to put people back to work, where they can earn a living, and that goes a long way to solving problems.”

Ivey profusely defended Canfield, who recently has been under attack by the media—especially APR— and politicos for his dogged—some say shady—support of HB317, a bill that carved out a special exception for economic development professionals who are exempt from state ethics laws.

Ivey said she had no difficulty following the ethics laws as written. “I try my best to read the law and abide by it, and I check with an attorney if I’m unclear.”

Gov. Ivey says the legislation was necessary to make Alabama competitive as it seeks to lure businesses to the state. “Well, first of all, economic development is important. Rural areas, urban areas, economic development is a necessary ongoing effort that we’ve got to be competitive – and it’s a very competitive process,” said Ivey. She said that Alabama is only one out of three states that doesn’t clarify that economic development professionals are not lobbyists. Sticking with the talking points that led to its passage, Ivey defended the bill as vital to growing the state’s economy. “More importantly is we don’t want to lose any projects that we would have lost if this had not passed,” Ivey concluded.

As for rewriting the ethics code as proposed by Republican House and Senate leadership for the 2019 regular session, Ivey wouldn’t commit but didn’t rule out calling a special session to focus attention on that one issue. She conceded that such a Herculean process would require serious preparation and intense attention to details. Lately, House and Senate leadership has cited the stringent ethics laws as to why lawmakers are leaving office and why they are having trouble finding candidates. Recently, Republican Senate President Pro Tem Del Marsh, from Anniston, said that under current ethics laws only wealthy individuals or retirees would run for office.

Ivey said she had no difficulty following the ethics laws as written. “I try my best to read the law and abide by it, and I check with an attorney if I’m unclear,” said Ivey. When asked why everyone in public service couldn’t follow her example, she replied, “I’m sure they could.”

The governor said she had been thinking about how ethics commissioners are appointed and finds that there is potential for a conflicting interest since commissioners are chosen by the speaker of the house, lieutenant governor and governor.

“I find it sort of curious and troubling a little bit that the governor, lieutenant governor, and the speaker of the house are the three people that currently make appointments to the commission,” Ivey said. “We three serve under the provisions the commission is charged with enforcing, so it seems troubling to me that – I’m going to appoint you to the Ethics Commission, and then somebody brings charges on me and you’re going to sit in judgment of me.” She says it makes more sense to change the appointment process so the commission appointments are made by the chief justice of the Supreme Court, presiding judge of the Court of Criminal Appeals and presiding judge of the Court of Civil Appeals. “They answer to the Court of Judicial Inquiry under Alabama state law. And they’d be independent,” she said.

Recently, Ivey has come under attack by certain media outlets and Huntsville Mayor Tommy Battle, who claims she is avoiding a head-to-head debate match-up with her Republican primary challengers. “This race is not going to be about stunts to attract media attention. This race is going to be about the individuals’ records, and mine’s an open book,” Ivey said. “Under my leadership, we got jobs, unemployment’s low. We put our people back to work, and Alabamians know that.” Ivey seemed to enjoy taunting the media and her rivals but recounting her success over the last year. Current polls show Ivey’s approval rating steady at over 60 percent favorable. “But anyway, my schedule is just not such that I can let the media or campaigns dictate my schedule. I’ve got to govern, and I plan to govern,” she said.

During the interview, Ivey defended the state’s decision to hire Wexford Health Sources, Inc., to provide healthcare services for its beleaguered prison system despite the company’s potential financial collapse under the weight of the impending lawsuit in Mississippi. Citing her confidence in the department of correction’s commissioner, Jeff Dunn, Ivey felt Wexford was the right choice after a point by point comparison of the three companies vying for the hundred million dollar contract. Despite Wexford being sued by the state of Mississippi for its part in a bribery scandal relayed to its DOC commissioner, who now resides in prison, she was comfortable with Dunn’s choice. Ivey said she seemed to recall reports that Wexford was not involved in the scandal. APR could not readily identify a report that exonerated Wexford.

Confidence in her cabinet is high according to Gov. Ivey, who said of its members, “They are strong people, with expert knowledge in their subject matter, and also, highly intelligent and deeply committed to providing an open, honest and transparent state.”

Ivey says her commitment to serving goes back to her youth when she was elected lt. governor at Girls’ State, a summer leadership and citizenship program sponsored by The American Legion and the American Legion Auxiliary for high school juniors. “I’ve long had a passion for helping others, whether it was being lieutenant governor at Girls’ State or vice president of the student body at Auburn University. I’ve always had a passion for helping people do more than they thought they could.”

When asking about her health and grueling schedule, she replied, “I’m wonderfully well. After visiting with y’all, I’m fixing to leave and head to Escambia County for the night. I’m doing fine.”

She will face a roster of men in the Republican primary in June.