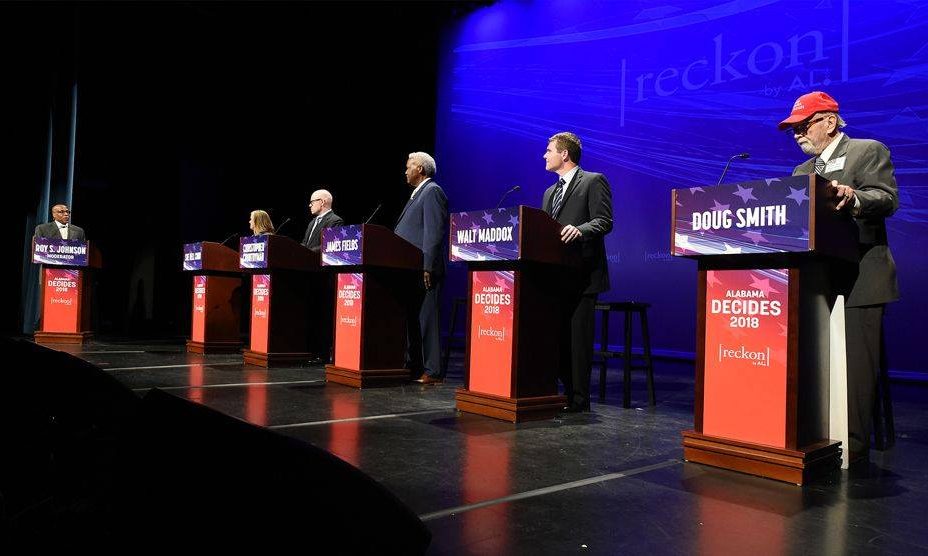 Tuesday, the Democratic candidates for governor of Alabama all attended a debate hosted by Reckon, an al.com vehicle, at Birmingham’s historic Lyric Theatre.

Sue Cobb is the only one of the Democratic candidates who have won a statewide campaign before, being elected chief justice of the Alabama Supreme Court in 2006. Cobb’s husband Bill has a severe artery blockage and will soon have surgery soon, but her husband and her daughter urged her to come to the debate tonight.

Walter “Walt” Maddox is the mayor of Tuscaloosa. Maddox said that he supported passing a lottery, taxing gaming, and reaching a compact with the Poarch Creek Band of Indians.

James Fields is a former state representative who ran unsuccessfully for lieutenant governor in 2014. “We believe in this campaign that we are going to move Alabama forward, because Alabama is ready to move forward.”

Doug “New Blue” Smith ran for Alabama Commissioner of Agriculture and Industries unsuccessfully. Smith said that Alabama has been moving backward since Bob Riley was elected as Governor and accused Republicans of forcing austerity policies on Alabama.

Christopher Countryman is an equality activist. He said that the people of Alabama are taxed already enough.

Cobb said that as governor Alabama she will be advocating a lifetime learner lottery that will bring in another $300 million a year. Cobb said that after that we have got to look at revenue.

Countryman said that he is looking at bringing new recycling industries to the state.

Fields said that he would look at raising property taxes particularly on owners of large tracts of land. Fields also expressed a desire to end the tax on groceries.

Maddox said that his lottery vote would occur in November 2020 during the Presidential election.

Fields said that Alabama can not wait that long.

Smith said, “In 2002 49 percent of state revenues were from federal revenues. That has dropped to 37 percent. We don’t need to raise taxes we need to recapture those funds.”

Cobb said, “My plan for the life long learner lottery would bring in $300 million to the state.”

Smith said, “We cut education $1 billion in 2008. We need to replace those dollars with federal dollars.”

Maddox said that the lottery is the first major step we can take and then the state can begin re-defining expectations for education in Alabama.

All six of the Democrats expressed that they are in favor of a lottery of some kind.

Reckon’s Kyle Whitmire invoked Gov. Don Seigelman’s 1999 lottery plan that was rejected by voters when asking about the lottery.

Fields said that he is looking at collecting taxes on internet sales; but whatever we do it can’t come from grocery taxes because that is taxing the poor.

Cobb said that bringing a lottery is the most likely option that we can bring through the Legislature. Cobb said that she would have a special election rather than waiting until 2020.

Maddox said, “I feel cofident that it is going to pass.”

Smith said that he would approach the Congress and ask for a block grant for education that we can use at our discretion and secondly use a lottery if it should pass.

Countryman said, “I would build five new recycling facilities in the state in my first year as governor. We could easily generate 12,000 new jobs.”

Cobb said, “The people want it.”

Countryman said, “The ability to cross between the aisle is relatively easy for me. We need to find common ground with Republicans.”

Fields said that he could work with Republicans the same way we did in Cullman.

Cobb said that everyone supports clean water and even Republicans are now astounded by the fact that the legislators have zeroed out water quality enforcement. She said that she can lure moderate Republicans.

“I am the only person on this stage who has proven that she can beat a Republican who outspent me three to one,” Cobb said.

Maddox said that he supports the decriminalization of marijuana and making medical marijuana prescriptions available for doctors to issue and suggested that his administration would move forward in a thoughtful and strategic way towards the legalization of recreational marijuana.

Smith said that cannabis helps his throat and his ability to speak better so, “I am in favor of medical marijuana,” but warned that smoke from marijuana is more dangerous than cigarette smoke.

Cobb said that she favored a a re-examination of all of Alabama’s drug laws and that medical marijuana has a significant impact on a number of conditions.

“Mass incarceration is a significant problem,” Cobb said. “I still believe that marijuana can be considered to be a gateway drug.”

Countryman said that he supports medical marijuana but suggested there be a hierarchy in place to prevents consequences like the Colorado man who lost his life from a marijuana brownie.

“The longer we keep them in there the longer we have to provide for their families out here,” Fields said.

Cobb defended her decision to resign as chief justice of the Alabama Supreme Court.

“I was with my Mother when she breathed her last breath and nobody will ever convince me that that was a mistake,” Cobb said.

Cobb and Countryman attacked Maddox for not allowing lower income Tuscaloosa citizens to rebuild their homes after the 2012 tornado ripped through the heat of the city.

Cobb said that the rebuilding plan had been a disaster for everybody except for wealthy developers and wealthy students.

Maddox said that he worked in the rule world, rather than “Ruling from a marble castle in Montgomery.”

Ask the people of Tuscaloosa they re-elected me twice after the tornado.

Cobb said that the people who lost their homes didn’t have the money to contribute to campaigns.

“What you are saying is absolutely untrue and it is sad that you are that desperate,” Maddox responded.

Cobb said, “Running for mayor and then running for Governor six months later is another definition of quitting.”

Cobb said that she spent 30 years on the bench.

“It was not my role to get on a soap box against the legislature,” Cobb said.

Fields said that as governor he would forge friendship and develop trust legislators to move the state forward and fix Alabama.

“We can work with Republicans, first we have just got to get Democrats working together,” Fields said “Compromise is what makes politics work. We are not going to allow the people of Alabama to be robbed but there are some issues we can compromise on.”

Countryman said. “Food is a life necessity. Why we are taxing somebody’s way to sustain life?”

Maddox said that he built a recycling center in Tuscaloosa after the tornado.

“Tuscaloosa City schools are more segregated than they have every been and two of your high schools are on the failing schools list,” Cobb said.

Maddox said that governors have more control over education than mayors do.