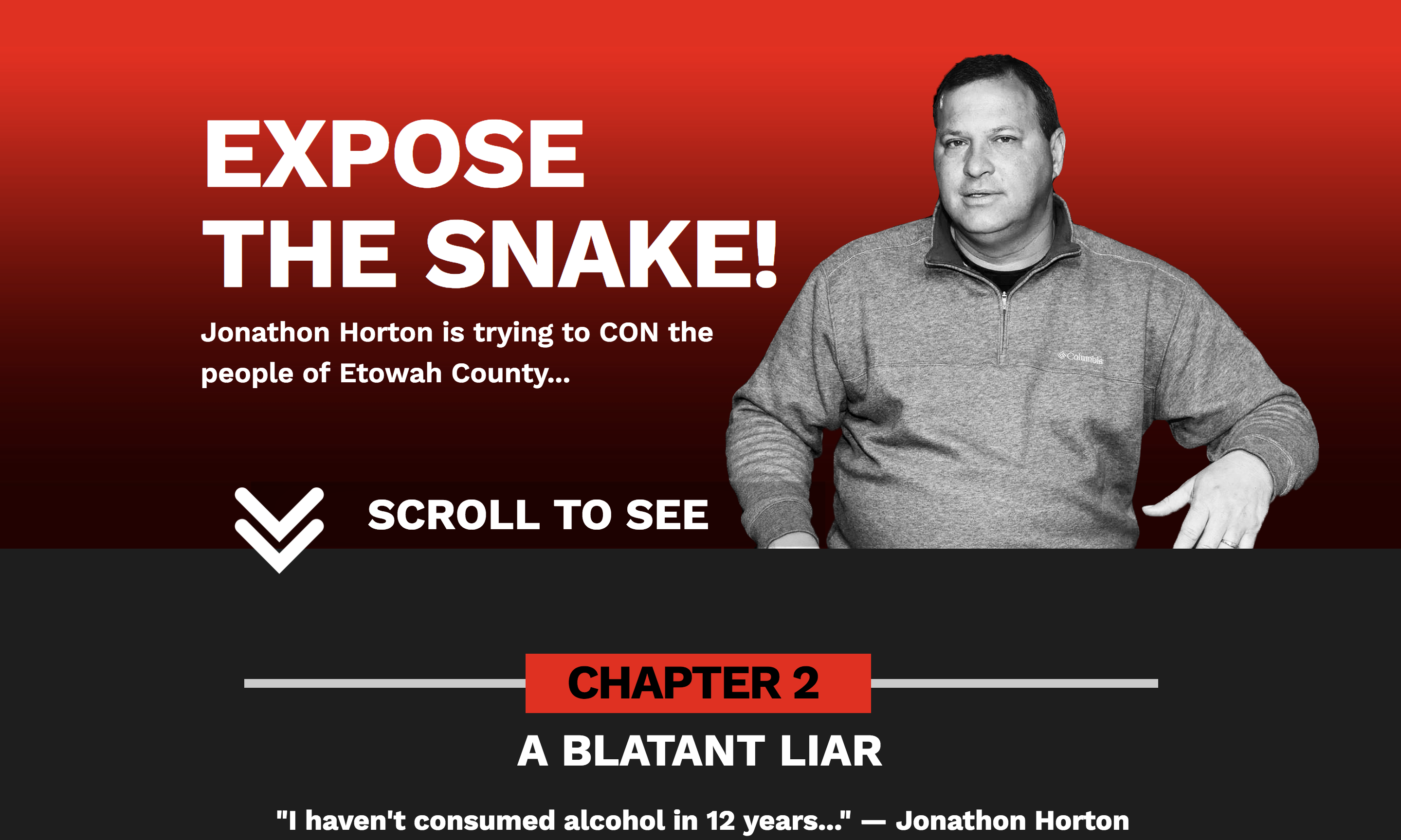 For the past several weeks, current Etowah County Sheriff Todd Entrekin has dealt with national news stories over his spending of money allocated for jail food.

Now his opponent in that race, Jonathan Horton, is facing his own bad news.

On Tuesday, a website — www.exposethesnake.com — went live, and it contains particularly damning information on Horton, the current police chief in Rainbow City and a former Etowah County deputy.

Particularly troublesome are documents, including an arrest report, newspaper stories and a sentencing order, from Horton’s 2006 DUI crash in his county vehicle. A video appearing on the website states that Horton was forced to resign after pleading guilty.

Court records found on Alacourt and newspaper stories from that time show that Horton entered a plea deal and agreed to plead guilty to a lesser charge of 3rd-degree assault instead of DUI. He was sentenced to 12 months in prison and ordered to pay court costs.

A Gadsden Times story from July 3, 2006, states that Horton, who was working on a district attorney’s office task force, was in his county-issued Chevy Tahoe, when he collided with the late-model Ford Mustang of Scarlett Bellamy. Bellamy’s car flipped and landed in a field, where she had to be cut free by firemen. She would require several surgeries on her legs over the next few years.

Then-Etowah County Sheriff James Hayes told reporters that the crash was “alcohol related,” and he said that “Jonathan suffered a lack of judgment, made a poor decision and he’ll have to face the consequences.”

Horton has apparently been questioned by voters about that incident, and a second video on the exposethesnake website shows a clip of Horton explaining that he hasn’t had an alcoholic drink in 12 years now.

That video ends, of course, with recent footage of Horton downing shots in a bar. (While it’s impossible to determine how recent the footage of Horton at the bar might be, in the video he tells the person recording it that he doesn’t want “any negative campaign stuff.”)

The website’s registration is anonymous and originates through GoDaddy.com. A link on the page directs people to a Facebook page set up to “provide the voters of Etowah County with verified facts about people seeking office in our community.”

When if comes to our aging roads and bridges there is plenty of need in our state, and Etowah County is no exception.

Ivey campaign welcomes James, Blanchard to governor’s race with a not so subtle challenge

"Other candidates are welcome to contrast their promises with the governor's record if they'd like to try," the campaign said.