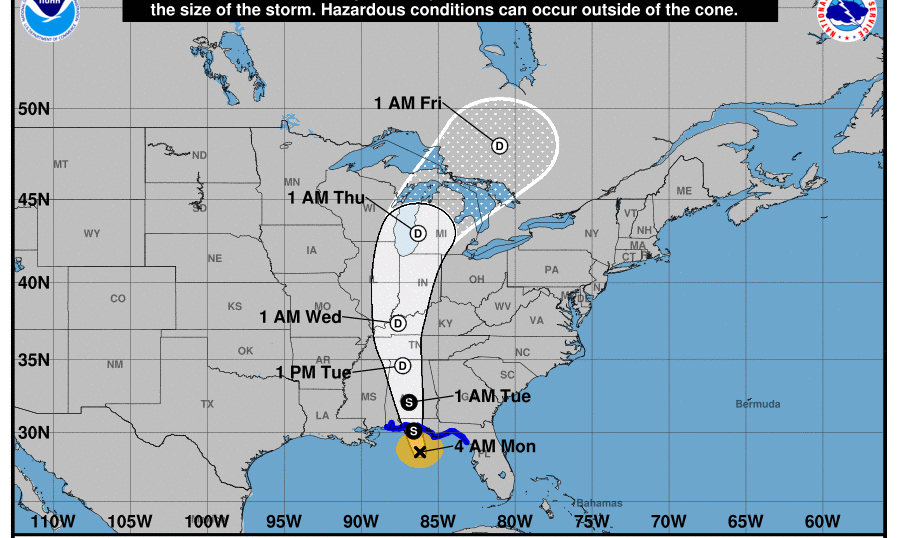 Tropical Storm Alberto is expected to make landfall today, and the latest from the National Weather Service in Birmingham says it will be in the Florida panhandle.

As of 4:00 a.m. Monday, the storm is still in the Gulf of Mexico just a little south of the Florida panhandle according to the National Weather Service. It’s projected path will have it cutting across Alabama as it heads northward.

“Subtropical Storm Alberto has strengthened this evening and continues to move northward toward the Florida Panhandle,” the Service said. “Additional strengthening is not anticipated at this time.”

In their warning, the National Weather Service said the storm posses a “variety of Hazards” for the South on Memorial Day.

“Subtropical Storm Alberto will pose several threats to the South the first half of this week,” the Service said. “Heavy rainfall and inland flooding is expected in the Southeast on Mon. and shift into the TN and OH River Valleys on Tues. and Wed.”

Several Alabama counties in the Southern part of the state have already been put in tropical storm warnings as they brace for the storm.

The National Weather Service said the Southeast part of the state could be affected by heavy rainfall, high winds, and the service also said there was a “limited” chance of tornadoes forming in the area. The latest predictions have SouthEastern Alabama having up to 6 inches of rain.

Gov. Kay Ivey issued a state of emergency over the weekend and activated the EMA center in Clanton, Alabama, to deal with the storm.

The service advises that those in the storm’s path follow weather updates and heed any warnings given by the service. The eye of the storm is expected to exit the state on Tuesday at approximately 1:00 p.m.