There is a lot of corruption in Alabama politics. We have had governors go to prison, a governor take a plea deal to leave the office, sex scandals, ethics scandals; but now there are allegations that a candidate may have somehow been involved in possibly intentionally inflicting pain on horses.

Soring is the practice of intentionally abusing Tennessee walking horses and related breeds to exaggerate their gait, causing the animals pain each time they step so they lift their front legs higher in what is known as the “Big Lick.” The abuse often includes the use of caustic chemicals cooked into the skin and then irritated by chains but also can involve shoving objects between the hoof and stacked.

The purpose of causing the horse to suffer pain with each step is to make them raise their feet higher which is desirable in Tennessee Walking Horse and Racking Horse competitions. Those breeds of horses are naturally gaited and high step naturally on their own. Some very unscrupulous competitors sometimes sore the horse in order to get a more exaggerated gait and thus more wins on the show circuit.

The practice was banned in the early 1970s. Congress passed the Horse Protection Act with the intent of banning this cruel practice. Lack of sufficient funding to send a USDA inspector to every Tennessee Walking allows horse industry organizations (HIOs) to train and license their own inspectors, known as Designated Qualified Persons (DQPs), to examine horses at shows for signs of soring.

In 2009 Hunter Price received a 90 year suspension from the sport for a bilateral sore that was found by inspectors on a horse he was competing with. His mother, Oline Price is listed as having sored horses and was cited for an incident in 2003. Oline Price is the elected revenue commissioner in Lee County, AL. Oline’s husband and Hunter’s father, is Randy Price, R-Opelika, who is running for Senate in District 13 in the June 5, GOP primary.

Randy Price said on his website, “Married more than 39 years to the former Oline Walton, Randy and his wife are the fourth generation to live on the family farm. He is a businessman and a leader in his community, but his most important titles are husband, father, and grandfather.”

Randy Price says that he raises cattle and goats and the horses are Commissioner Oline’s.

Price is running in the Republican primary on Tuesday against Tim Sprayberry and Mike Sparks.
Incumbent Gerald Dial, R-Lineville, is vacating the office to run for Commissioner of Agriculture and Industries.

Randy Price ran for Alabama House District 38 in 2014, but lost the primary to Isaac Whorton, R-Valley. 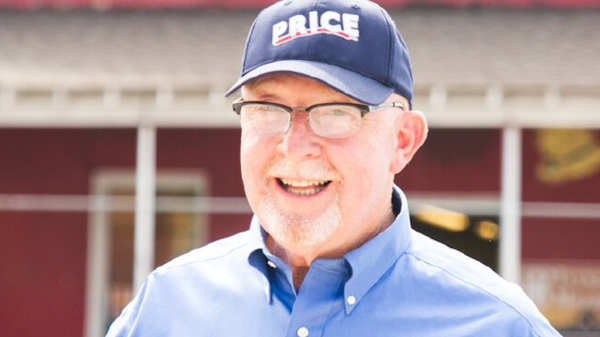 Price is seeking re-election in District 13, which covers all or parts of Chambers, Cleburne, Clay, Randolph and Lee counties.