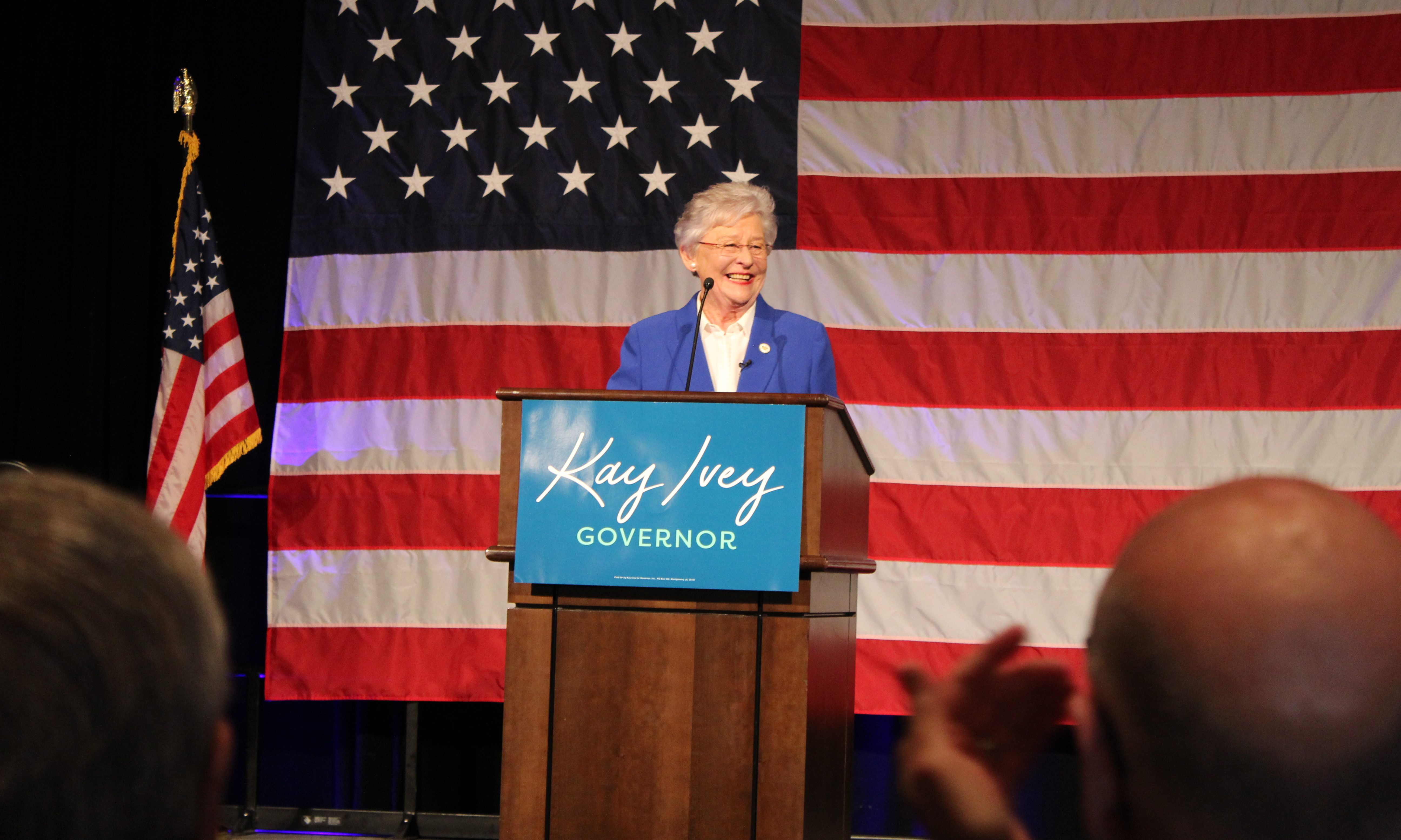 Tuesday, Alabama Republican Party Chairman Terry Lathan congratulated Gov. Kay Ivey on her resounding victory in her quest to be the second woman governor elected in the history of the state of Alabama.

Lathan said in a statement, “Congratulations to Governor Kay Ivey on strongly securing the Republican nomination for Governor of Alabama. At the time of this release, Governor Ivey’s vote totals were more than the entire Democratic Gubernatorial field combined.”

Ivey received 325,201 votes, which amounted to 56.1 percent of the vote. The Alabama Media Group and Associated Press called the race at 9:53 p.m., but Ivey led throughout the night so there was little real doubt that Kay would win the race.

“We did it,” Ivey said. “I am honored to be the Republican nominee for governor for the great state of Alabama.”

“Alabama is working again,” Ivey continued. “Instead of staying stuck in the past we have moved forward and steadied the ship. We promised the people that we would restore their faith in government and we promised we would clean up the mess in Montgomery.”

“Tonight’s results showed that Alabama is working again and we are on the right track,” Ivey said. “And I am not done yet.”

Ivey promised that she would always have an eye on improving education in the state, that she would work to improve the state’s infrastructure, and “Above all, I will work hard to maintain your trust and I will not let you down. We won a great battle tonight.”

Ivey was lieutenant governor for over six years until then Gov. Robert Bentley resigned and pled guilty to campaign finance violations.

As governor, Ivey has presided over the strongest economy in the modern history of the state. More people are working now than ever before in Alabama and the unemployment rate has never been lower. While President Donald Trump and the Republican tax cuts likely contributed to the prosperous economic conditions, Ivey has not been shy about proclaiming

Battle had run on his experience over the last decade attracting new jobs and economic development into the booming city of Huntsville. In many cases, both Kay and Battle took credit for the same jobs announcement, including the new Toyota-Mazda plant.

Dawson is a regular contributor to the Rick and Bubba show and is head of one of the largest ministries in the state. Dawson, however, failed to connect with the social conservatives that propelled Roy Moore to Chief Justice of the Alabama Supreme Court twice and just last year gave Moore the Republican nomination for U.S. Senate.

Dawson’s campaign floundered after he exposed a fraudulent grant awarded by the Bentley administration and renewed in the early days of the Ivey administration. At that press conference, Dawson asked: “What else is Kay hiding?” State Rep. Patricia Todd, D-Birmingham, then came forward and accused Kay (who has been married and divorced twice) of being a closeted lesbian.

Todd produced no evidence to back any of her startling claims and the whole fiasco blew up on the Dawson campaign. Dawson told the APR that he was not coordinating anything with Todd. The public, however, thought he was and his campaign (and any chance that Kay would face a runoff) essentially ended after that gaffe.

State Senator Bill Hightower, R-Mobile, finished a distant fourth with just 3.8 percent of the vote. While Hightower was a respected state Senator, he was an obscure figure statewide and never really found acceptance with the wider electorate.

Michael McAllister died weeks before the election and before he was able to launch his campaign. Despite being dead and never having the first campaign ad he still received over 2300 votes.

Ivey was born in Camden in Wilcox County and grew up on a cattle farm. She graduated from Auburn University and worked as a school teacher. Eventually she became a clerk in the state House and later worked for the Commission for Higher Education. In 2002 Ivey was elected Treasurer and re-elected in 2006. In 2010 she upset incumbent Lt. Gov. Jim Folsom Jr., a former governor. Ivey was reelected overwhelmingly in 2014.

Ivey will now run in the November 6 general election against the winner of the Democratic primary, Tuscaloosa Mayor Walt Maddox. This will be Maddox’s first ever statewide election.

Democratic turnout was lethargic. Despite a crowded Democratic field, 67.2 percent of Tuesday’s primary voters voted in the Republican Party.  Ivey alone had over 42,000 more voters than even participated in the entire Democratic primary.

“Congratulations to our Alabama Republicans who won their races Tuesday,” Lathan said. “We are proud of our strong ALGOP candidates for venturing in to the arena of patriot service and running for office. It is not an easy task, but it is important to remember they are protecting Alabama from liberal progressive actions while highlighting solid conservative policies.”