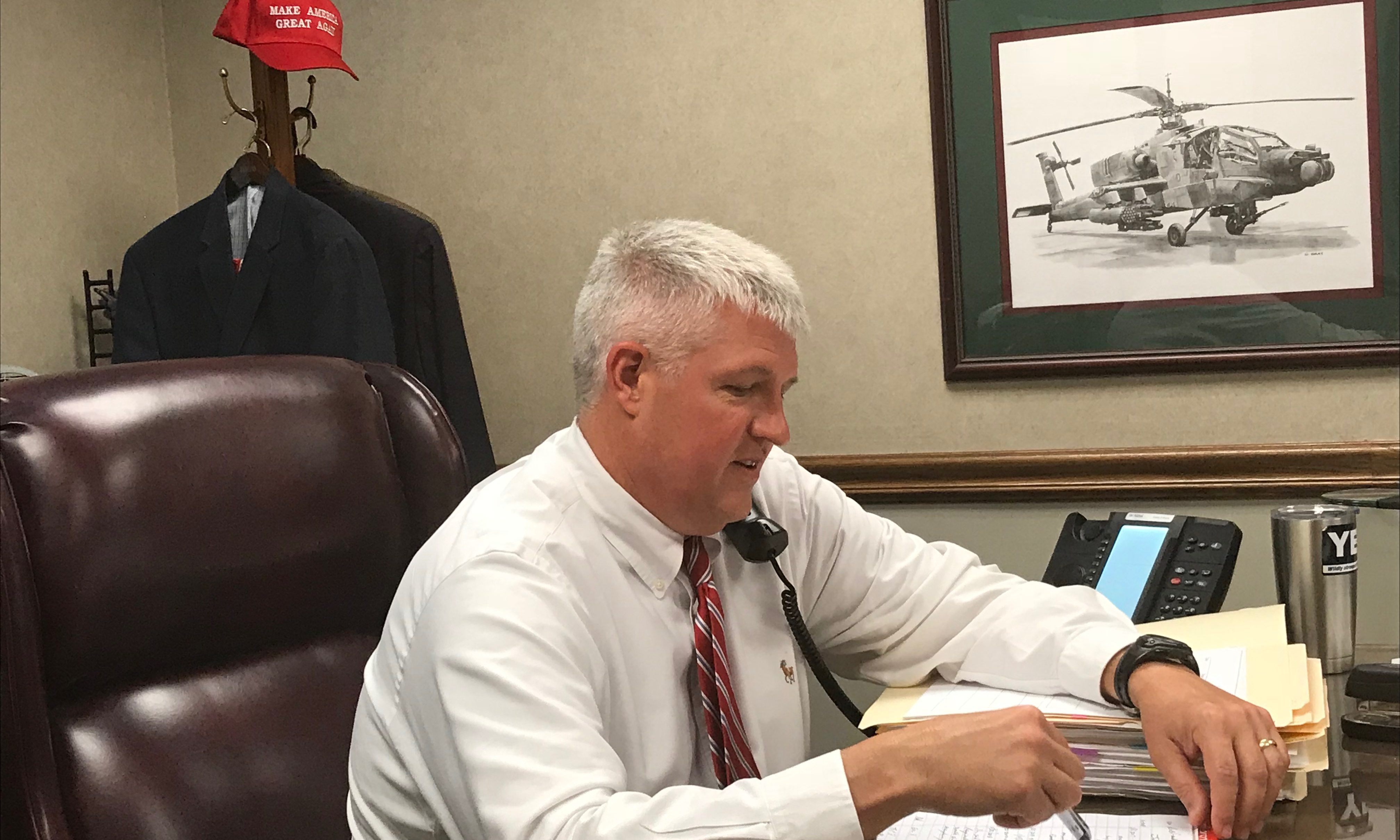 When in April President Donald Trump declared, “We’re going to be guarding our border with the military,” until the wall is complete, St. Clair County Assistant District Attorney Lyle Harmon answered the President’s call and is currently over a thousand miles away from home, patrolling the border between the United States and Mexico.

In May, Gov. Kay Ivey ordered five members of the Alabama National Guard and a guard helicopter to deploy to the Mexican border. Harmon is piloting the UH-72A Lakota helicopter that Gov. Ivey sent at President Trump’s request.

Just days before leaving for his border assignment, Harmon finished prosecuting one of the most heinous crimes committed in St. Clair County in recent memory. Harmon successfully prosecuted an Odenville man who raped a 3-year-old girl. Harmon secured a guilty verdict and life in prison without parole for Robert Earl Armbrust, 44, who had even videotaped his brutal crime.

St. Clair District Attorney Richard Minor said after Armbrust’s conviction and sentencing, “As parents we tell our kids monsters do not exist, but they do. This monster will spend the rest of his natural life behind bars.”

Minor is leaving the District Attorney’s office in January after winning a seat on the state’s Court of Criminal Appeals.

It was Harmon’s courtroom skills that removed that monster from civil society, and he will return to St. Clair County after completing his tour guarding the border.

Harmon, who joined the military in 1990, like many Alabama military men and women, stands ready at a moment’s notice to leave behind family, friends and civilian jobs to honor the call to duty. And for Harmon, there is little difference between this mission today and when he was called to fly gunships in Iraq. Yes, his children are older, his responsibilities greater and his hair grayer, but duty, honor and country are in his blood like the thousands of men and women who served before him.

“After 20 years my wife Shelly understands when the nation calls I go,” said Harmon, “So do my boys. It’s hard but as a family, we stand together knowing that this is the price we pay for freedom.” Harmon has three sons: Will, Sloan and Brody. “Will was six, and Sloan was three when I was deployed to Iraq,” said Harmon. “Brody wasn’t even born, and now Will is in ROTC and will join the military after graduating from Jacksonville State.”

As a young boy, Harmon never dreamed of becoming a prosecutor —a job he loves—but he did know one day he would fly helicopters.

“You know I never had a dream of growing up and being an attorney. I did, at an early age, decide that I wanted to fly helicopters.” As a young boy, Harmon took a job at the St. Clair County Airport, which then housed an Army Reserve helicopter Unit. ” I cut grass, pumped gas, whatever was needed,” Harmon said. “The Army guys gave me a hard time, but in a good way…they were a professional bunch that I admired and looked up to. I would watch them do their flight training, and I thought I’m going to do that someday.”

It was the U.S. Military that gave him the opportunity to fulfill that boyhood dream. “They have been fantastic to me, there aren’t many Pell City kids who get to fly multimillion-dollar helicopters,” said Harmon. “But again, I get way more out of the military than they get out of me. So, when the president and the governor call, I’m happy and ready to go anywhere anytime.”

Along the way, Harmon developed the same passion for taking bad guys off the street as a prosecutor. “The first job I landed out of law school was as a prosecutor in Jefferson County,” said Harmon. That’s when he began to realize the kind of impact that the job had on keeping the streets safe. But it was DA Minor who gave him a life-altering opportunity.

Harmon recalls that his training gave him the confidence to fight hundreds of hours in combat as part of the 101st Airborne Division in Iraq, where he provides close air support for infantry troops. “In combat you just kind of revert to your training, sure there’s a lot of stuff going on. You want to be sure that, you know, that you’ve got everybody identified that supposed to be identified and that you don’t make a mistake because if you’re not focused on the mission a lot of people could get hurt.”

He says Minor gave him the opportunity to apply that same focus to prosecuting criminals. Minor is one of the state’s most highly respected district attorneys, and his presence in the St. Clair DA’s office will be missed.

“Richard is the best, and his shoes will be hard to fill,” said Harmon. But with men like Harmon serving the people of the country, there’s no doubt that criminals will continue to face swift and fair judgment in St. Clair County.

Harmon says whether it’s in a helicopter or the courtroom, his job is to protect citizens from those who would do harm. “You know, it’s just I can’t see myself now doing anything else,” said Harmon. “I hope I don’t have to.”