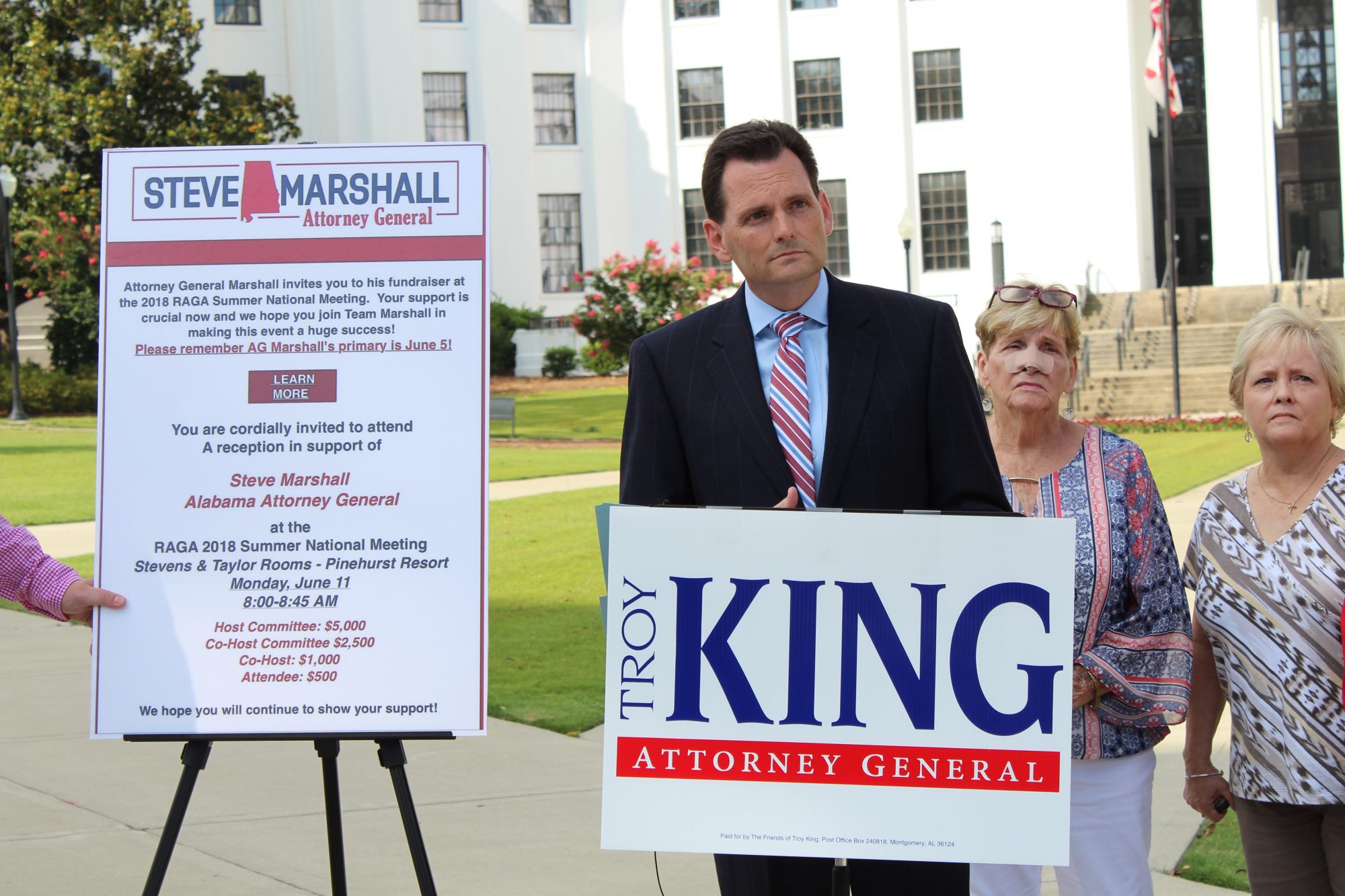 As it turned out, Marshall was at an exclusive golf resort in North Carolina where attendees paid $25,000 for a weekend outing and where, at the same hours as King’s presser, a $5,000 a plate breakfast was being held to raise money for Marshall’s candidacy.

Recently, Marshall spent $190,000 on three days of television advertising where he highlighted a young girl whose attacker was prosecuted in state court. The ad makes it appear that Marshall himself had rescued the young woman single-handedly.

But as King makes clear, violent crime is at its highest level in two decades.

“Today, with violent crime at a 20-year high, you might be wondering where is Steve Marshall,” asked King. “Is he with his staff writing new laws? Is he at a parole board hearing battling to protect justice that’s been hard fought for and hard won on behalf of victims’ families who are terrified of having justice snatched out of their hands? Is he in a grand jury room somewhere in Alabama? Is he in a courtroom somewhere in Alabama?”

The answer to all of the above is that Marshall was not even in the state, and as for Marshall working on new laws or attending parole board hearings, or conducting grand jury investigations, records show these activities are not high on Marshall’s to do list.

King said if he was going to ask the voters to judge Marshall by his calendar, then he also needed to account for some of his time since leaving the Attorney General’s office nearly eight years ago. King said that on his own time, he attended 52 parole hearings, without anyone asking or receiving payment. “I do it just because it’s the right thing to do, and I’ve only ever seen the Attorney General at two of those hearings, and trust me, I don’t go to parole hearings for jaywalkers,” said King.

He further excoriated Marshall saying, “Maybe Steve Marshall is not at any of those places in Alabama where justice is won and lost because no one there can afford to pay $5,000 a person for him to come.”

According to career officers in Marshall’s office, he spends a majority of his time campaigning or having his staff dictate press releases.

King was joined at the press conference by several individuals, including one family.

In Marshall’s latest video, he used a young, red-haired girl talking about how she was a victim no more after Marshall prosecuted her abuser. But Marshall has protected abusers when it was politically convenient. Which is what he did after then-Gov. Don Siegelman appointed him Marshall County District Attorney in 2001. Marshall served as a Democrat until 2012, when he switched parties after supporting President Barack Obama for reelection in 2010.

After woman’s “horrific” sexual assault, what did Steve Marshall do?

On Monday, while King was talking about prosecuting criminals and protecting victims’ rights, Marshall was enjoying a mega-donor breakfast in his honor, courtesy of the Republican Attorney Generals Association.

King ended the presser saying, “Yes, it’s true, justice in Alabama today is hard to find, but Attorney General Steve Marshall is even harder to find.”