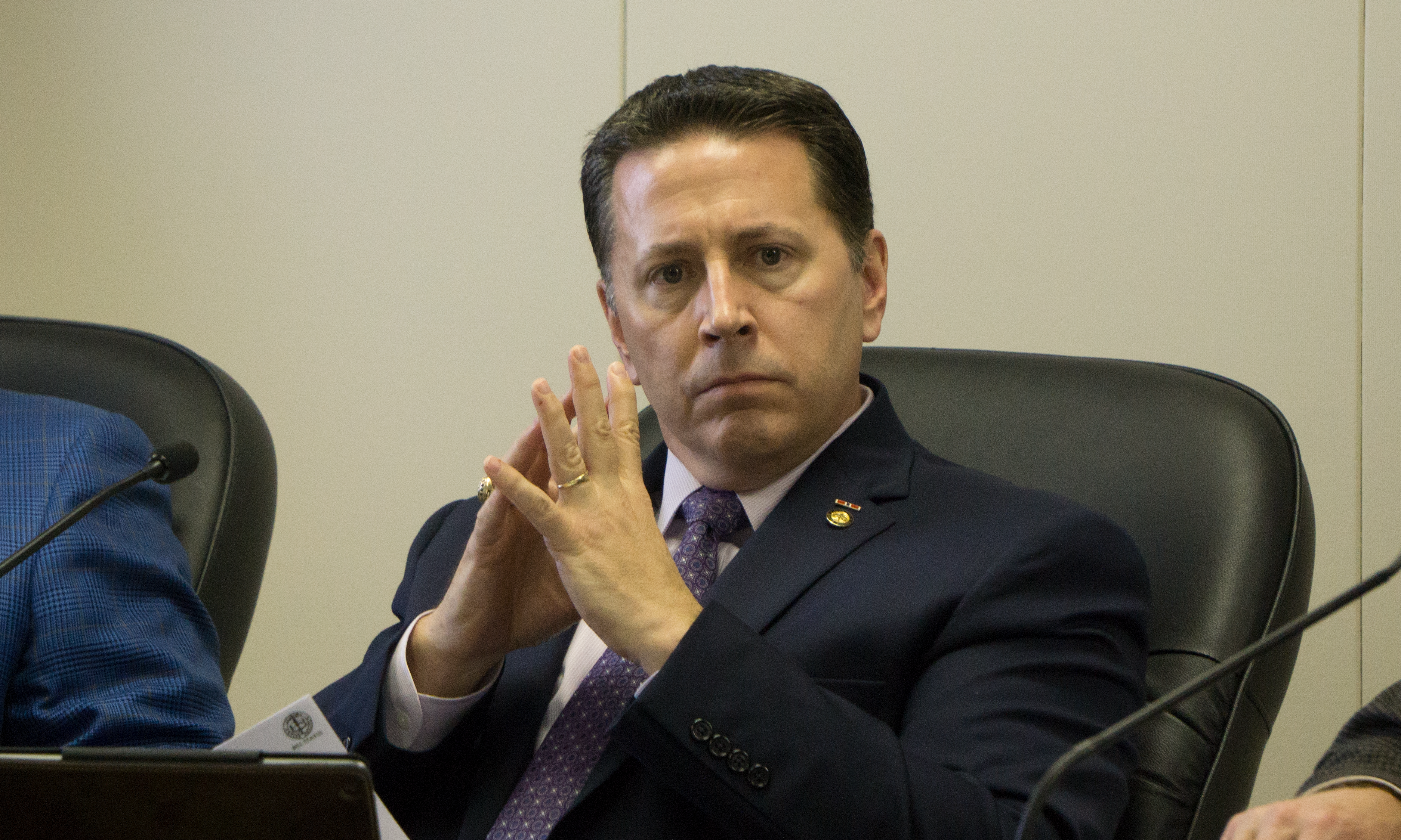 Sen. Phil Williams, an opponent of the bill, watches as Sen. Brewkader makes his pitch at a Senate Judicary Committee Meeting on Feb. 21, 2018. (Samuel Mattison/APR)

On June 5, Jones defeated state Representative Mack Butler, R-Rainbow City. Most political observers expected Butler to win the Republican primary; but the general election against state Representative Craig Ford (I from Gadsden) was considered to be a challenge. Jones defeated Butler 53.43 percent to 46.57 percent 12,516 to 10,907. The Alabama Democratic Party is not fielding a candidate in District 10.

“It is painful not to see Mack Butler in an elected position,” Chairman Butler said. “I have had plenty of discussions with Andrew Jones and with upper level and state leaders to make sure that he has all the resources he needs to make sure that a Republican holds that seat.”

Williams said that he is impressed with how hard Jones worked and how popular he was in Cherokee County and the inroads that he had made even in Etowah County.

“I feel comfortable that Andrew will have the resources,” Williams said. “This race will be high profile. It is one of the few deeply contested senate seats in the state I have talked with Del Marsh and Andrew has talked with Marsh.”

Williams said that Marsh has assured them that there will be resources to help Jones.
Senate President Pro Tem Del Marsh, R-Anniston, is heading the efforts to re-elect a Republican senate majority.

Following the primary win Jones said in a statement:

“I’M EXCITED TO ANNOUNCE MY VICTORY in the State Senate 10 Republican Primary. I’d like to thank my family for their support, and I’d also like to thank Mack Butler for running a spirited campaign. I humbly ask all of Mr. Butler’s supporters for their help in the General Election on November 6. All of the credit for our victory goes to our volunteers and supporters, without whom our victory today would not have been possible. Many of you may not realize that we were outspent somewhere in the neighborhood of 10 to 1 in this campaign. We just continued to focus on taking our message directly to the voters. With our victory today, I hope we have shown that hard work and a clear message still has the power to resonate with Alabama voters.”

While Ford is running for the Senate as an independent, he was formerly the House Minority Leader for the Democrats.

State Representative Becky Nordgren, R-Gadsden, told the group, “I have started putting up signs after the primary. We are in it to win it and help push the liberals back.”

Gil Isabel is running for the House seat that Craig Ford is vacating to run for the senate.

“This seat has been held by a Democrat for many many years,” Isabel said. “I don’t want to overpromise and under deliver.”

Isabel said that it takes a team effort to represent Etowah County and that he is a team player.

“It is time for a change,” Isabel said.

Both Isabel and Nordgren face Democrats in the general election on November 6.

Senate District Ten was redrawn in 2017 after the Alabama Legislative Black Caucus sued all the way to the U.S. Supreme Court to have some districts redrawn to be more competitive for Democrats and provide more influence for minorities. A portion of staunchly Republican St. Clair County had been in the district. They no longer are and SD10 now includes more of Dekalb and Cherokee County in addition to Etowah County.