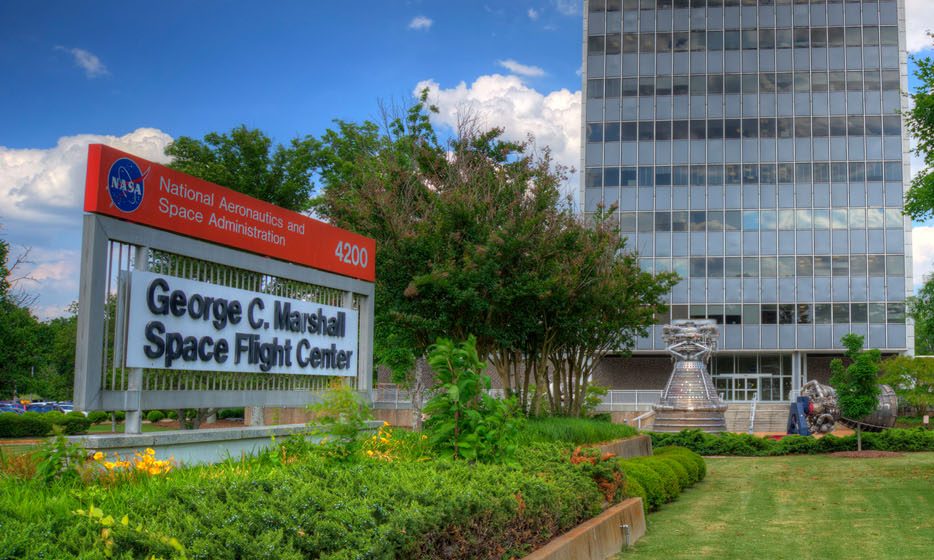 Marshall is one of NASA’s largest field installations, with almost 6,000 civil service and contractor employees, an annual budget of approximately $2.5 billion and a broad spectrum of human spaceflight, science and technology development missions.

On March 15, 1960, President Dwight D. Eisenhower (R) signed an executive order officially naming the new space center the George C. Marshall Space Flight Center. General George C. Marshall was Chairman of the Joint Chiefs of Staff during World War II. He selected then Major Eisenhower for a series of promotions that eventually led him to being the top allied officer in the European Theatre. Following the war, Marshall served as Secretary of State for the Truman Administration where he won the Nobel Peace Prize for founding the Marshall Plan that provided aid to Europe to recover from World War II. Also on March 16, 1960, Eisenhower signed an executive order transferring the Saturn rocket program from the Army to NASA. On September 8, President Eisenhower visited Huntsville, Ala. to dedicate the new NASA field center. The George C. Marshall Space Flight Center was placed under the direction of former German scientist Dr. Wernher Von Braun. As part of his remarks dedicating the center, President Eisenhower referred to General Marshall as a “man of war, yet a builder of peace.”

The Marshall Space Flight Center was tasked with building the Saturn V rocket that launched man to the moon in 1969. Marshall has been heavily involved in numerous NASA missions including the Apollo landings on the surface of the moon, Skylab, the Space Shuttle program that carried a generation of Americans into space, the Hubble Telescope which has revolutionized astronomy, and the Space Launch System which has the potential to possibly get man to Mars.

Brooks added, “Marshall Space Flight Center is the birthplace of the American space program. Dr. Wernher von Braun and his team famously pioneered rocket propulsion at Marshall during the Space Race of the 50s and 60s. Marshall has decades of experience working with other government agencies and industry partners to study and coordinate rocket propulsion technologies that are critical to national security, intelligence gathering, communications, weather forecasting, navigation, communications, entertainment, land use, Earth observation, and scientific exploration. The ALSTAR Act solidifies Marshall’s status as America’s premier rocket propulsion center and challenges Marshall to develop the next generation of rocket propulsion technology.”

“With President Trump’s establishment of Space Force as an independent branch of the military, rocket propulsion is recognized as even more important to securing America’s future than ever before because America’s military relies heavily on its space assets (global positioning satellites being but one example) to protect our national security,” Brooks said in a speech on the floor of the House of Representatives.

NASA’s Marshall Space Flight Center and the military’s Redstone Arsenal have over the last 60+ years transformed Huntsville from a farming and textiles community to one of the foremost aerospace and technology hubs in the entire world.