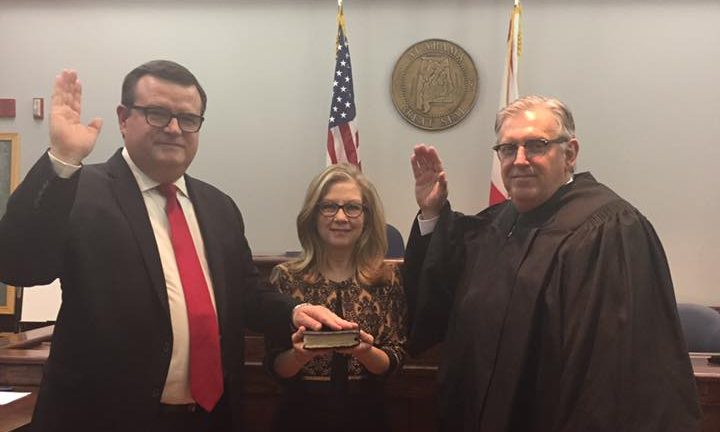 Chris McCool is running for Place 2 on the Alabama Court of Criminal Appeals. McCool addressed the Alabama Republican Assembly Tuesday in Northport.

“I was honored to have the Republican Assembly’s endorsement,” McCool said. McCool said that even people who should know better are not aware that the primary runoff elections are Tuesday, July 17. “Bad politicians are elected by people who do not vote. The election is next week and people don’t get it. Go vote and get that vote out.”

“In this race I am running for the Court of Criminal Appeals,” McCool said. A lot of people don’t understand what that court does. “They don’t retrial cases. I am the District Attorney for Pickens, Fayette, and Lamar county. I try cases. The appellate court reviews those cases on appeal. Five judges sit up there in Montgomery and they look at the cold words of the court transcript. In the past we have had jurists there who do not know what they were looking at.”

“Our race is between an Assistant Attorney General and myself and we are going to be friends when it is over,” McCool said. “He is an appellate lawyer for about 11 years. I have been a trial attorney for the past 23 years.” If I am on that court I will know what I am looking at when I read the words of the transcripts.

“I have seen every kind of case there is,” McCool said. DUIs, I trialed a hunting from a public road case in Lamar County and I lost. You can’t win those in Lamar County. I have trialed public corruption cases, cases involving child abuse and child sex abuse. The last cast I trialed was a man who abused his grandchildren. He is now serving a life sentence. A man killed two police officers and a dispatcher in the Fayette police station. I saw the dead body of my friend lying there. I still trialed that case and that killer sits on death row today.

“I have been married to Sherri Fair for 26 years,” McCool said. “We have three children.”

“I pastor a church a couple of miles from my house,” McCool continued. “The biblical foundation for our society is so important.” Micah 6:8 sums up how we should live our lives and especially in the judicial system.”

“I will shew thee, O man, what is good, and what the Lord requireth of thee: Verily, to do judgment, and to love mercy, and to walk solicitous with thy God.” (Micah 6:8 Douay-Rheims)

Be just. Nothing is more important for a judge than to rule justly. Be merciful where the law allows it and be humble McCool explainted.

“I would be honored by your vote, a week from today,” McCool said.

McCool was asked how could they motivate Senator Doug Jones (D-Alabama) to vote to confirm Brett Kavanaugh to the U.S. Supreme Court.

Chris McCool is running against Rich Anderson for Place 2 on the Criminal Court of Appeals in Tuesday’s Republican primary runoff election.

Polls open at 7:00 am and close at 7:00 pm. You must have a valid picture ID in order to participate in the election. Alabama has a law outlawing crossover voting so you may not vote in a primary runoff that is different than the primary you ran in. The Republican runoff will be winner take all because no Democrat has qualified for this office.