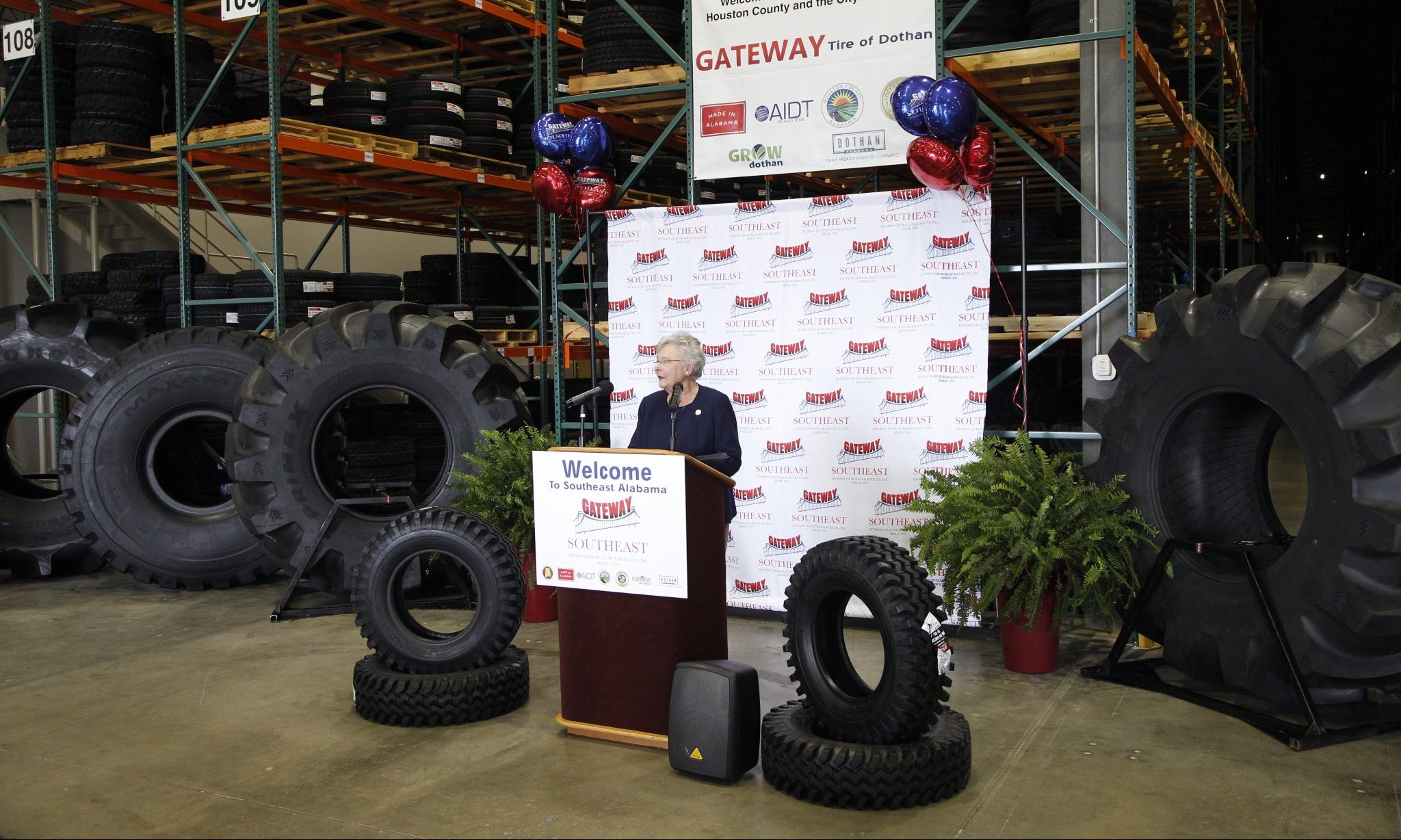 Friday, Alabama Gov. Kay Ivey was in Dothan for the grand opening of the new Gateway Tire distribution center.

“One year ago, I joined Gateway Tire to break ground on their new distribution center in Dothan,” Gov. Ivey said n social media. “We’ve officially come full circle today. I was glad to be back to cut the ribbon and add even more to the already strong distribution sector in the Wiregrass area.”

“When we put people back to work it helps everybody. Rising tide floats all boats so this is good for this part of the state and all of our state,” Ivey told reporters. “When you got a team working together who committed to businesses succeeding and family strive then you are sure bond to get good positive results.”

“Days like today require teamwork and commitment,” Ivey said. “Economic development is a collaborative effort between state and local leaders and businesses that are attracted to all that Alabama has to offer. At a state level, my team and I are focused on making days like today the norm and not the exception.

Ivey praised the local officials who worked on the project and AIDT as well as Alabama Secretary of State Greg Canfield.

“It truly takes everyone working together to have success,” Gov. Ivey added. “At the end of the day Government does not create a single job, companies do and we are here to celebrate Gateway Tires new distribution center’s grand opening.”

“They jobs represent our neighbors, our friends, our families,” Ivey said.
Ivey was introduced by State Representative Steve Clouse (R-Ozark). “Thank you for the warm introduction and for how well you represent the folks you serve.”

Gateway Tire is investing $11 million into the new distributions center that will create 30 new jobs.

Economic Developer Nicole Jones told the Alabama Political Reporter, “Distribution centers are one of the State of Alabama’s foundational business targets, meaning services they provide support a myriad of industries within our state. Products distributed through the Gateway Tire Southeast facility, for example, contribute to Alabama’s position as a leader in the automotive industry.”

“Gateway Tire has been in business since 1929,” Nicole Jones added. “Their presence will create jobs, opportunities, and will serve as a catalyst for future projects in Dothan and the Wiregrass area. Thank you, Gateway Tire Southeast, for your investment in Alabama.”

Since 1929, we have dedicated ourselves to our customers, employees, and communities, and we believe that our hometown, personal approach to customer service, and our fair and honest dealings are the main reasons why we have expanded into 54 retail stores in 6 states.

Gateway Tire said on their website, “Our goal is to provide the best products and service at a fair price, all while being up-front and honest with each and every customer. We’ll never try to sell something that our customer doesn’t need just to make a buck.”

Gov. Ivey is running for reelection by canvassing the state at economic development announcements and grand opening. Ivey is campaigning on her record as a job recruiter and a proven economic developer. Ivey hopes that the record low unemployment and the impressive job growth will help her to win over Alabama voters. Meanwhile her opponent, Tuscaloosa Mayor Walter “Walt” Maddox (D), is trying to press Ivey to hold debates.

Ivey said that since she has been governor, “More than $8 billion has been invested in Alabama creating 16,000 new jobs.”

(Original reporting by the Ricky Stokes News and Dothan First ABC contributed to this post.)