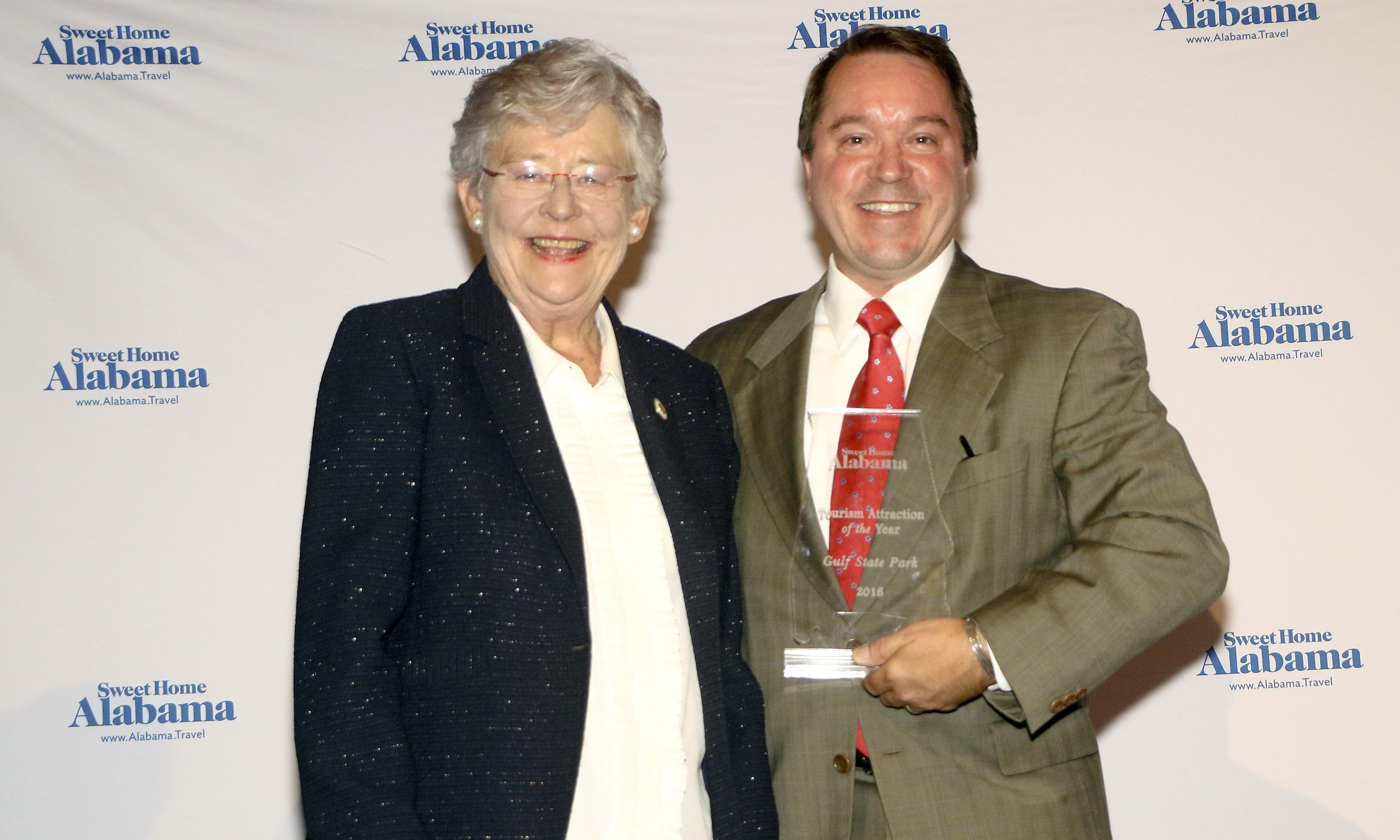 Alabama Gov. Kay Ivey poses for a photo with Greg Lein, Director, Alabama's State Parks, at the Alabama Governor's Conference on Tourism in Montgomery, Ala., Monday, August 6, 2018. The newly renovated Gulf State Park in Gulf Shores was named the Alabama Attraction of the Year at the annual awards.

Gulf State Park has been named the Alabama Tourism Department’s 2018 Attraction of the Year.

The park received the honor Monday night at the Alabama Governor’s Conference on Tourism.

The park includes three miles of white sandy beaches and draws visitors from around the world. Alabama Tourism praised the park’s staff and volunteers who provide hospitality, educational and recreational offerings.

Alabama Department of Conservation and Natural Resources Commissioner Chris Blankenship also praised the park’s staff and volunteers for their work.

“Our employees and dedicated volunteers work incredibly hard to make Gulf State Park the best it can be,” Blankenship said. “This park is one of the jewels of our entire system and we’re honored to receive the award from the Alabama Tourism Department for 2018 and we expect the next year to be even better with the opening of the new Lodge and Conference Center this November.”

Gulf State Park has received many other awards in the last several years. TripAdvisor.com inducted the park into its Hall of Fame for receiving accolades from its customers. The park has also received three other certificates from the travel website over the past five years.

Alabama State Parks Director Greg Lein, who accepted the award for the park, pointed to these awards as evidence of the park’s excellence.

“The Tourism Attraction of the Year Award reflects these recent achievements, as well as the work to re-establish our lodge and create new improvements in the park,” Lein said. “These achievements by staff and volunteers, coupled with the investments in new amenities such as trails, education facilities and the rebuilding of our Lodge at Gulf State Park, have made the park an attractive setting for the recruitment of new business partners like Valor Hospitality and Hilton Hotels and Resorts.”

TripAdvisor recognized the park in three categories of excellence, based on visitor reviews and rankings on the travel website. The park includes a 1,540-foot-long fishing and education pier, 500 improved campsites, 33 cottages and cabins, a nature center, an 18-hole golf course, over 3 miles of beaches, several coastal lakes, more than 28 miles of trails, a dog park and multiple beach access sites.

Improvements to 6,500-acre Gulf State Park in recent years include restored and expanded sand dunes, a new Interpretive Center and a Learning Campus. Thousands visit the park every year.

A new Lodge at Gulf State Park is set to open in November. Connectivity to the outdoors is the central focus of the environmentally friendly coastal development. The lodge, which is designed to meet LEED Gold and SITES Platinum standards, will have 350 rooms and 40,000 square feet of indoor and outdoor event space. It’ll feature the largest beach view ballroom on the Gulf Coast, which can accommodate groups of up to 1,000. A Gulf-front pool and restaurant with house-made and locally sourced food are also planned.