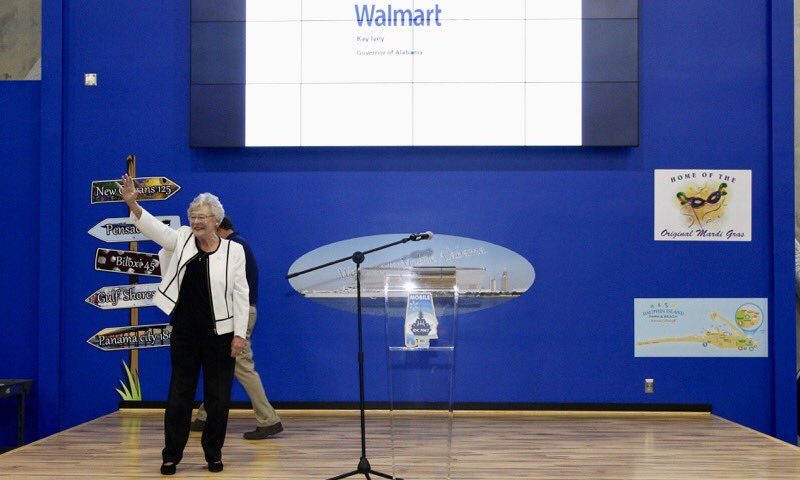 Monday, Alabama Governor Kay Ivey (R) was in Mobile County for the opening of a new Wal-Mart Distribution Center.

“Excited to be in Mobile Co. for the grand opening of @Walmart’s newest distribution center,” Ivey said on Twitter. “Walmart invested $135 million to build this facility, creating 750 jobs! I know that these folks will play a major role in fulfilling Mr. Sam Walton’s vision to serve the customer.”

Economic Developer Nicole Jones told the Alabama Political Reporter, “Distribution centers, one of the State of Alabama’s foundational business targets, provide products and services that support a myriad of industries within our state. The Walmart Distribution Center in Irvington, one of six distribution centers in the United States, will be a significant addition to the estimated $22.4 billion economic impact generated last year by the Alabama State Port Authority.”

Nicole Jones explained to APR, “At last week’s economic development conference hosted by the EDAA, Port Authority CEO Jimmy Lyons shared with us that empty shipping containers are a much-needed commodity in Alabama. When fully operational, Walmart will carry in approximately 50,000 containers per year, which will thus create a surplus of empty cargo containers that exporters can use (and therefore reduce their costs). As a result, Alabama’s port will retain business that would otherwise divert to alternate ports due to a lack of containers. Keeping more business at home – this great news for Mobile County, The Port, and our entire state.”

The new Distribution Center will be 60 acres under one roof.

“Walmart proves to be a great corporate partner to the state of Alabama, year after year, by investing in its stores, its employees and the surrounding community,” Gov. Ivey said. “Their commitment cannot be better proven than by the opening of this new Distribution Center, which, when fully operational, will provide approximately 750 quality jobs in the Mobile area. We are grateful to Walmart for supporting the economic health of the Port City, and for the large role they play in propelling our great state forward.”

“We are excited about how this facility will help us better serve our customers across the South and beyond, while creating a positive economic impact locally through job creation and future development,” said Jeff Breazeale, Walmart Vice President, Direct Import Logistics. “We are grateful to the State of Alabama, Mobile County, the City of Mobile, the Mobile Area Chamber of Commerce and the Alabama State Port Authority for the warm welcome we have received here, and we look forward to a strong partnership with the community for years to come.”

Mobile is Alabama’s port city. It is also the oldest City in Alabama, having been founded as a French colony in 1702, 31 years before the English founded the Georgia colony.

Since rising to the office of Governor, Kay Ivey has presided over an unprecedented period of job market improvement. June unemployment was 3.9 percent and the state has seen its total workforce rise to pre-Great Recession levels.

Ivey is running for her own term as Governor in the general election on November 6. Tuscaloosa Mayor Walter “Walt” Maddox is her Democratic opponent.