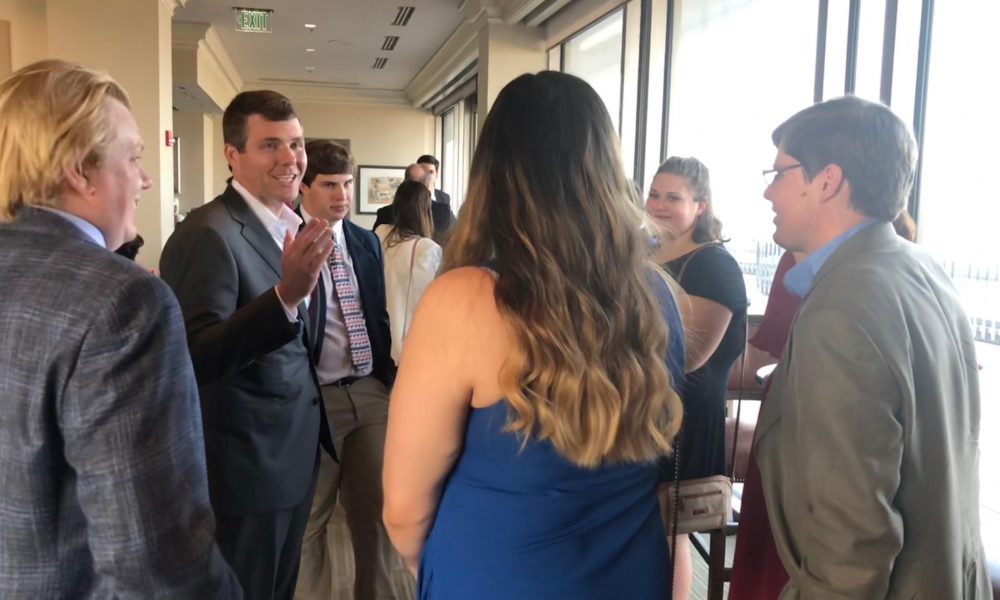 The night consisted of dozens of college-aged, politically-driven students mingling with their local, Democratic idols and representatives. The candidates made their way around the venue in order to reach out and introduce themselves to as many students possible. Guests and political figures alike were engaged and conversation-driven throughout the night.

Guests were seated for dinner upon the program’s beginning. The evening was emceed by Jacob Morrison, the ALDC programs director, and he introduced the first speaker, Dr. Will Boyd. Dr. Boyd was to-the-point on thanking the young Democrats for their contributions to the cause, briefly touched on his political background and left the audience with a prayer and a certainty that he is going to “become the 31st lieutenant governor of the great state of Alabama.”

Senator David Burkette was a rousing speaker and supplied the guests with words of wisdom and laughter. Following his speech, Mayor Randall Woodfin took to the stage early and spoke to the students. Then, speaking of the other candidates, said, “These are good people, they’re mothers, they’re fathers, they’re professionals, they are people who have taken out of their time to want to be public servants and understand the real definition of servant leadership. And for that reason alone is why I believe in every single one of them.”

Cara McClure and Kari Powell also delivered strong speeches that highlighted their many achievements and points of interest in their backgrounds that they believe make them the best candidates for the Public Service Commission. Behind the PSC candidates came the Democratic candidate for Secretary of State, Heather Milam, who was able to stir up the audience in a positive manner with the delivery of her address. “Who are we as Democrats? We are a party that’s committed to transparency. We are the party that is committed to civil rights. We are the party that is committed to families, to equity, to equality, to human rights and voter rights.” She ended on a push for women to run for office and a widespread idea for young people to engage in politics because, “politics is not a dirty word.”

Joe Siegleman, although not listed on the agenda, took to the stage and urged students to elect a new generation of leadership. “It’s going to take your generation recognizing that you can take the reigns of this state and that you can make a difference.” He also made sure to greatly thank Mayor Randall Woodfin and Mayor Walt Maddox for their achievements and strides they make as city leaders.

Tuscaloosa Mayor Walt Maddox closed the night with his address to the students. “What gets me excited is thinking about what all of us can do together as candidates. Together, we are going to stamp out corruption that’s eaten away at Montgomery for too long, and I can assure you that our administration is going to be the most accountable and transparent in the history of this state,” he said. “Tonight, college Democrats, you have a team of candidates that are going to give it everything we have on that field so that we take being on the right side of history, and in Alabama, we can again believe in our leadership up and down the ticket. This is Alabama’s moment, and I believe, and I hope you believe, as well.”

The night ended after Maddox’s delivery to the audience, which was met with a standing ovation.

The Alabama College Democrats are the official collegiate arm of the Alabama Democratic Party. Building Alabama’s next generation of progressive leaders.