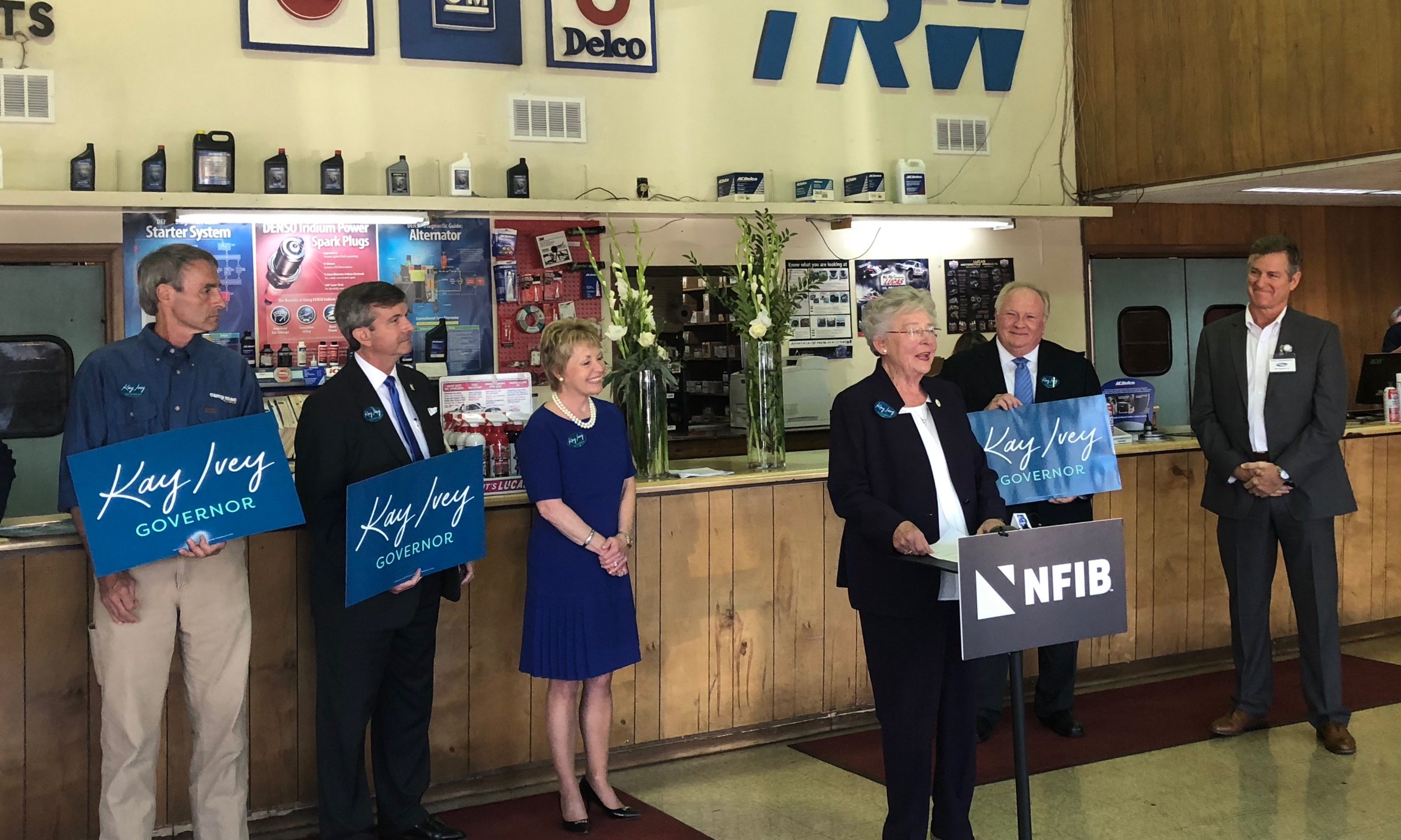 The NFIB Alabama PAC’s endorsement is based on the candidate’s record and position on small-business issues.

“Kay Ivey is the clear choice for Alabama’s small businesses,” Elebash said. “Kay Ivey is a strong leader who understands the challenges facing Alabama’s job creators. She opposes higher taxes and burdensome rules and regulations that would make it harder for small businesses to succeed and create jobs. This spring, she signed legislation prohibiting cities from requiring companies to purchase a municipal business license before driving through their jurisdictions for work purposes.”

“As Governor, I have made it my job to create a strong environment for job creation,” Gov. Ivey said. “That’s why I’ve worked closely with the NFIB and the state Legislature, signing the largest tax cut in a decade and eliminating unnecessary regulations that make it more difficult and more expensive to do business. Being endorsed for Governor by Alabama’s small businesses is truly an honor. I am grateful for their trust, support and everything they do to keep Alabama working!”

“Since taking office a little over a year ago, Governor Ivey has announced more than 15,500 new jobs and more than $8 billion in capital investment, creating exciting new opportunities for all kinds of small businesses,” Elebash added. “Under her leadership, our pro-business climate has received national recognition from the likes of the influential Business Facilities magazine, and Alabama’s employment rate is the highest it’s ever been.”

The President of Southern Distributors Steve Kampwerth said, “I would lie to welcome our guests including our esteemed guest, Governor Kay Ivey.”

Kampwerth personally thanked Gov. Ivey for her support for Senate Bill 316 during the last legislative session. “This bill established a 10,000 maximum before they had to apply for a local delivery license. As an auto parts distributer, we had to apply for hundreds of these licenses annually. Thank you governor for supporting this bill.”

Director Elebash said that each election, “We send a ballot to each of our members statewide. For the very first time since I have been here, Governor Ivey received the endorsement of 98 percent of our members. That is a record.”

Gov. Ivey was elevated to the office in April of 2017 Elebash said. “The NFIB has passed more than 80 small business bills in that period of time.”

“It is my honor to be here and spend time to people like you that our devoted to keeping Alabama working,” Gov. Ivey said. “Job creators are important to keep Alabama working.”

“It is not enough for our business to survive but to thrive,” Ivey said.
Elebash promised that, We will be working each day to make sure that our member are out working to help turn out the powerful small-business voting bloc on Election Day.

Reporters asked Ivey about her school sentry program that allows schools to arm one administrator.

“It is up to each school system to make their own decision,” Ivey said on whether or not they participate in the program.

Ivey said that she was not surprised by the recent court decision against the Alabama prison system and said that the prison system was working on filling its staffing shortage.

“We are working best and fast as we can,” she said. “Just because you have to hire more folks, it doesn’t mean they are available.” The prisons, “Are an Alabama problem, it will be solved by Alabamians.”

On Friday, U.S. District Judge Myron Thompson, a Jimmy Carter appointee, ordered the state to show why it should not be held in contempt of court for failing to meet his deadline for increasing the number of staff devoted to mental health in the prisons. The Southern Poverty Law Center is suing the state and the Alabama Department of Corrections on behalf of the convicts claiming that the lack of mental health staff amounts to cruel and unusual punishment under the Eighth Amendment of the U.S. Constitution.

The Alabama Political Reporter asked Director Elebash why they were not supporting Tuscaloosa Mayor Walter “Walt” Maddox (D) who has promised a lottery as a solution for some of the state’s revenue problems.

“We consider that as more of a social issue,” Elebash said. “None of my members have said that to me. My members have real world problems. They call me and say I have a problem,” with a regulation or something, such as like the issue here about the local delivery licenses. “Governor Ivey has been real good at working with us.”

“Gov. Ivey is all about action, not words,” Elebash said.

The NFIB said in a statement that “Today’s endorsement puts the considerable grassroots support of the state’s small businesses behind the governor’s campaign. Small-business owners and their employees vote in high numbers and are known for recruiting friends, family members and acquaintances to vote. NFIB will encourage its Alabama members to help turn out the powerful small-business voting bloc on Election Day.”

For more than 75 years, NFIB has been the voice of small business, advocating on behalf of America’s small and independent business owners, both in Washington, D.C., and in all 50 state capitals. The NFIB is nonprofit, nonpartisan, and member-driven. Since its founding in 1943, NFIB has been exclusively dedicated to small and independent businesses and remains so today.