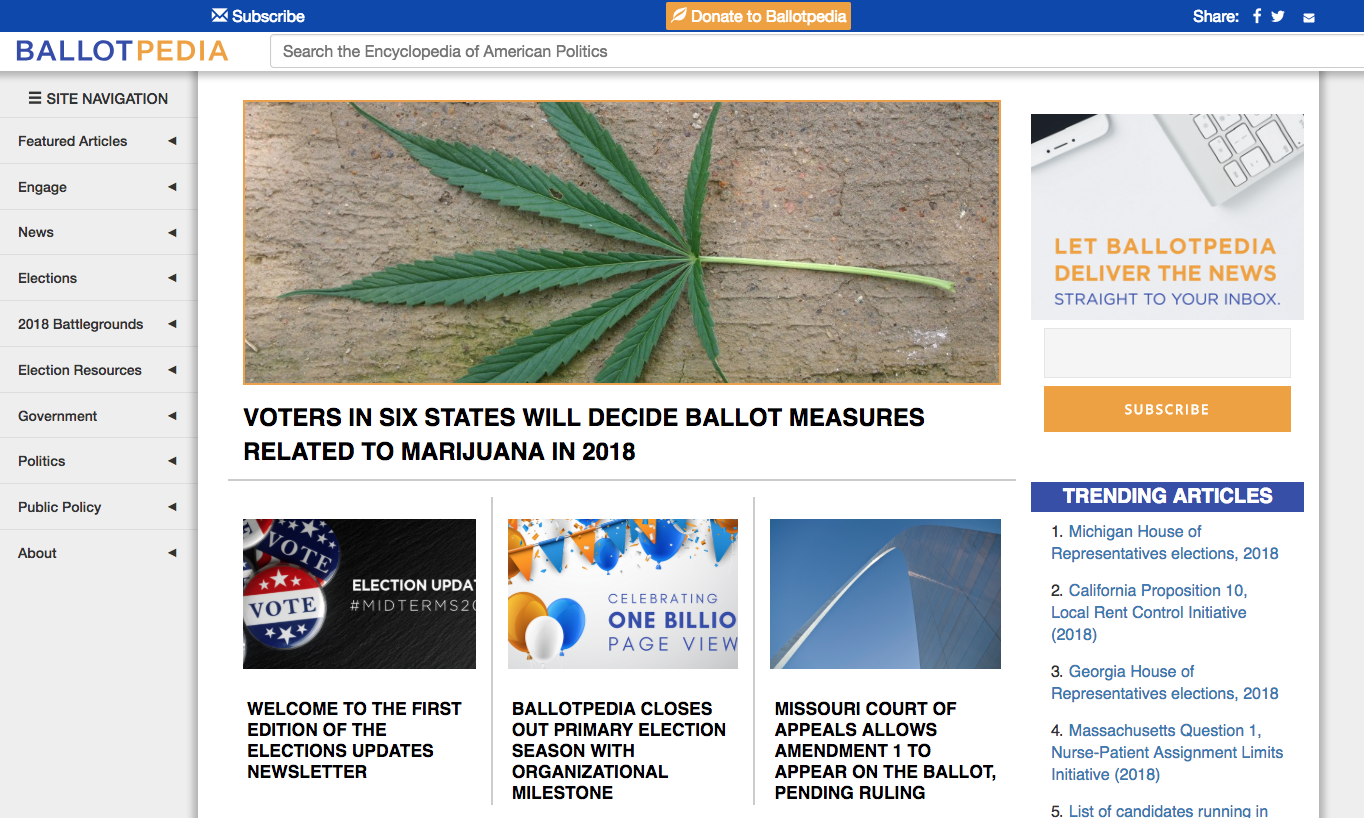 Ballotpedia.org tracked its 1 billionth pageview Thursday. Not so coincidentally, that Thursday was also the day of this year’s final statewide primary election in New York. The 2018 primary season saw exponential growth in readership of the political information website’s nearly 280,000 encyclopedic articles.

Ballotpedia Editor in Chief Geoff Pallay attributed the achievement to the organization’s emphasis on primary election coverage and exploring creative new ways to serve its readers.

“Ballotpedia has always made it a priority to provide voters with information they might struggle to find elsewhere,” Pallay said. “This year, we knew our readers needed more and better information about primaries, and their enthusiastic reception of our coverage has been extremely gratifying.”

Ballotpedia’s articles have been viewed 85 million times in 2018 alone.  That has already surpassed last year’s total pageviews by more than 60 percent.

In a non-presidential election year, Ballotpedia.org has seen 57 percent more traffic than the same time period in 2016.

“Reaching 1 billion pageviews is the result of many hours of staff conversations, research, writing, and editing, but also of thousands of emails, phone calls, and social media exchanges with readers,” Pallay said. “This milestone is as much their accomplishment as it is ours. We are honored when readers choose Ballotpedia, and we are delighted to help make their political research efforts that much easier and more pleasant.”

Ballotpedia is the online encyclopedia of American politics and elections and if frequently referenced by Alabama Political Reporter and other political professionals as well as by ordinary citizens. Its stated goal is to preserve and expand knowledge about politics by providing exceptionally high-quality, accurate, and objective information about local, state, and federal politics and policies. Its content includes neutral, accurate, and verifiable information on government officials and the offices they hold, political issues and public policy, elections, candidates, and the influencers of politics.

Ballotpedia is headquartered in Middleton, Wisconsin.

Ballotpedia was founded in 2006 and has grown to include over 275,000 professionally authored encyclopedic articles that have garnered over one billion page views.