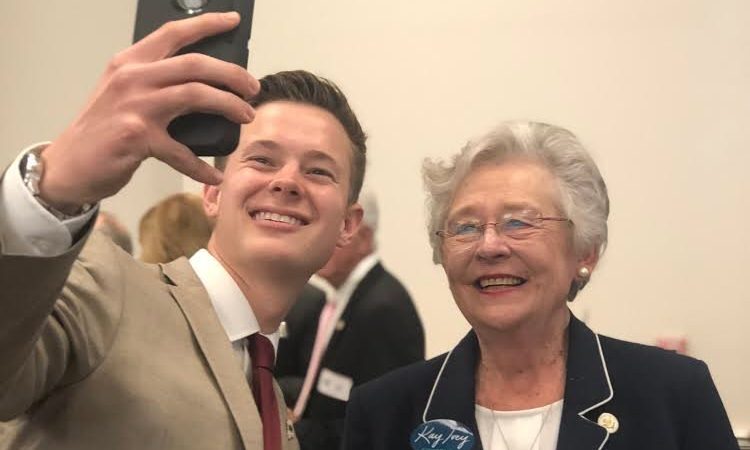 “I can remember coming to an Etowah County Republican Party meeting and if we had 25 we though we had a full crowd,” Gov. Ivey said addressing the crowd of six hundred there for the dinner at the Venue at Coosa Landing. “God bless you.”

“I had just three hours notice before I became the 54th governor of Alabama,” Ivey said. “That night, I spoke to my fellow Alabamians and promised that we would have an open honest transparent government.”

“I have delivered on each of those promises,” Ivey said. “We have steadied the ship.”

Ivey said that she had to evaluate the cabinet that she inherited. Ultimately, she replaced about half of them. The Governor praised her cabinet. “They are my teammates and co-workers.”

“They are 5000 vacant jobs paying in the $80,000 bracket in Alabama in the area of computer science,” Gov. Ivey said because we don’t have workers with the skills to fill them.

“I was proud to sign the largest middle class tax cut in history,” Ivey said. “I signed the largest education budget in a decade and I am proud of that. Both budgets combined are right at $9 billion.”

(When Ivey entered office) “There were only 313 state troopers,” Ivey said. “That wasn’t safe for the troopers, much less the people of Alabama. I worked with the legislature and by February we will have more than 400 law enforcement officers on our highways.”

Ivey said that the election is right in the middle of football season. “Right now the people of Alabama are looking for a head coach. I am the only one with experience working at this level. Our state has won every single game while I have been governor.”

“What search committee would even consider hiring someone who has never even coached a game at this level?” Ivey asked.

“She has not made a mistake,” Ainsworth said. “She has restored our reputation.”

On the Governor’s education plan, Rep. Ainsworth said, “I support her plan 100 percent. My two children are public school students in Alabama. I want them to have the same opportunities,” as children anywhere else in the country.

“The confidence in the private sector is at an all-time high,” Ainsworth said.

Ainsworth said that polling shows that most people my age believe that socialism, not capitalism, is the prefered way. “Socialism is not the answer, capitalism is the answer.”

“I am honored to be the Republican nominee for Lieutenant Governor,” Ainsworth concluded.

The Chairman of the Etowah Republican Party is state Senator Phil Williams (R).

“This is not a room that would have been full fifteen years ago,” Chairman Williams said. “I believe that after November sixth we will be entirely a Republican County.”

According to preliminary election results, Maddox won with 6,727 votes, or 54.9 percent.

The legislation would curb public officials' ability to close certain classes of businesses in a pandemic.