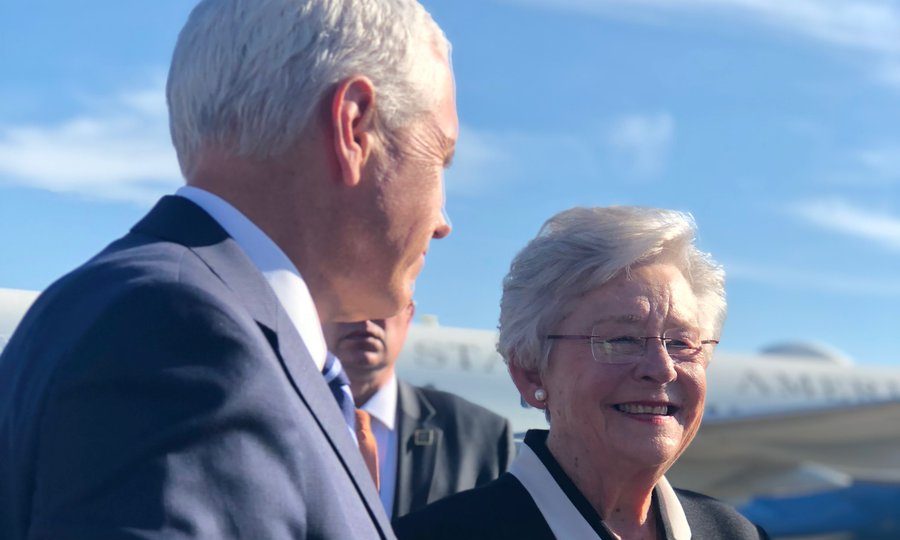 Tuesday, Vice-President Mike Pence (R) flew in to Birmingham for a National Republican Senate Committee (NRSC) event at Birmingham’s Weston Hotel. Prior to leaving for that event the Vice President had a brief private meeting with Alabama Governor Kay Ivey (R) aboard Air Force Two. Ivey and Pence then disembarked from the plane and met briefly with select supporters and members of the Alabama Air National Guard’s 117th Air Refueling Wing.

VP Pence said, “It is always great to be in Alabama.”

Kay Ivey is in a hard fought gubernatorial race. VP Pence endorsed Ivey, saying that, “She has been a good partner, I hope the people of Alabama re-elect her.”

Ivey and Pence reportedly discussed getting aid to victims of Hurricane Michael in Southeast Alabama.

Colonel Scott Grant told reporters that it was a great for some of his airmen to get to meet with the Vice President.

Colonel Grant said that he discussed some of the 117th’s 101 year history with the Vice President and that VP Pence reminisced about his own experiences in flight school.

The NRSC event had been rescheduled from October 11, because of Hurricane Michael.

Hooper said that Wellborn was critical of unfair Chinese competition in the kitchen cabinet industry. Pence responded saying that he and the President understood and are working on it. Hooper said that Pence also spoke about the confirmation of Brett Kavanaugh to the Supreme Court, “It was a huge win for the President.”

The NRSC raises money to elect Republicans to the U.S. Senate.

Pence is a former member of Congress and a former Governor of Indiana.

“It was such an honor to welcome @VP Pence to Alabama today! I appreciate his willingness to allow me to step on board Air Force Two to discuss some Alabama business,” Gov. Ivey said on Twitter. “He was very receptive and expressed his support of our great state.”

“It’s a work in progress, he clearly understands that I have got to protect Alabama’s economy, and we have seven OEMs that are expanding and provide thousands of jobs for our people,” Gov. Ivey said.

The general election will be Tuesday, November 6. Ivey is being challenged by Tuscaloosa Mayor Walter “Walt” Maddox. The Alabama Democratic Party has won only one of the last thirteen gubernatorial races in Alabama.

(Original reporting by WVTM TV Channel 13 contributed to this report.)