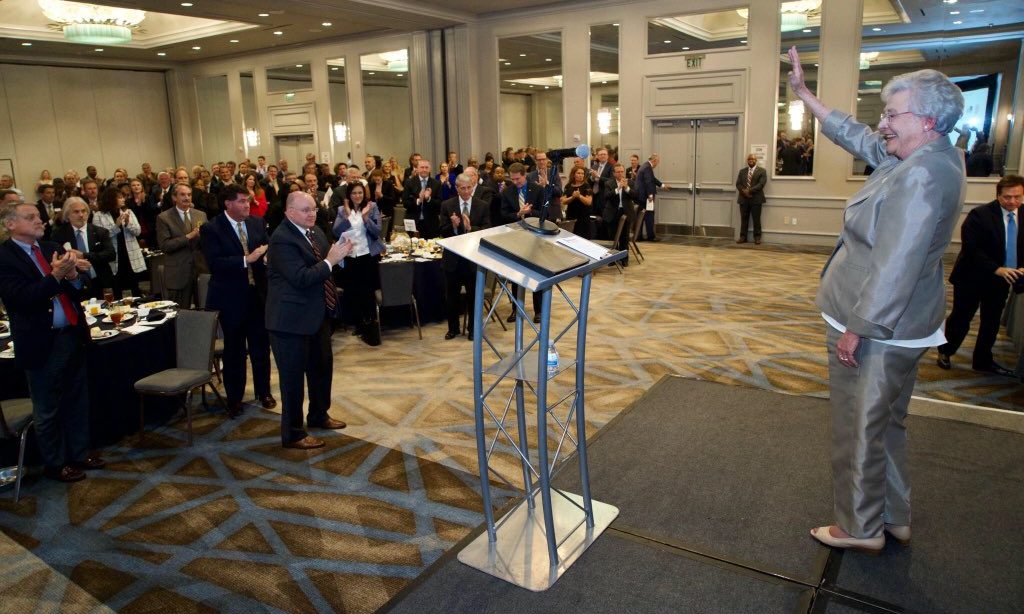 Thursday, Alabama Governor Kay Ivey (R) addressed the Alabama Automotive Manufacturers Association (AAMA) at the group’s 4th annual appreciation dinner at the Wynfrey Hotel in Hoover.
Ivey said that the companies that come to Alabama, “want to be a part of a team.”

“They can expect hard work, growth, and success,” Ivey said. “They want to be made in Alabama.”

Ivey said that she only had a few hours to prepare her transition to being governor at 6:00 at night. “The very first meeting I had the next morning was with Greg Canfield, the Alabama Secretary of Commerce.”

“We have seen 16,000 new jobs created since I took office and $16 billion in investments announced,” Ivey continued. “Alabama now has more people working than ever before in our history and Alabama’s automotive industry is powering that momentum.”

Ivey said that so far in 2018, Alabama’s automotive industry has had $2.2 billion in new investment and seen the creation of 4000 jobs.”

“In January, we had some pretty remarkable news, the Alabama football team won the national championship, but that was not the only remarkable news,” Mazda-Toyota announced that they were building an automotive assembly plant in Huntsville. “That is the largest development project announced in a decade.”

Ivey said that like we saw with Mercedes Benz in 1993 the announcement has had a trickle down effect and has resulted in more jobs from suppliers. The Mazda-Toyota announcement is, “Continuing to show the world that Alabama is the place to be for Automotive manufacturing.”

Every major automotive company in Alabama has recently expanded Ivey said. The state is ranked number one for doing business. States that locate here can expect to have a business partner with the state. “If you locate here in Alabama we are for you.”

“I have a very good relationship with President Trump but this back and forth on trade is where I draw the line,” Ivey said. “I have spoken with (Vice President) Mike Pence this week and made my concerns about this trade policy absolutely clear. I support the President and his efforts; but my job as Governor of Alabama is to make Alabama great.”

Ivey promised that she will do everything in her power for that Alabama automotive manufacturers and that they, “Are very important to Alabama. As Governor I take pride in all of our industries but especially in our automotive industry.”

Ivey said that the state’s automotive industry success, “Would not be possible without the work of every person that is sitting here tonight.”
Ed Castille is the Director of AIDT and a Deputy Secretary of Commerce.”

“She has steadied the ship and launched new programs,” Castille said of Ivey. “My favorite is Strong Start Strong Finish.”
“She is laser focused on workforce development,” Castille added. “I am proud to be on the Governor Ivey team.”

Ron Davis is the Executive Director of the AAMA.

Ivey is promoting the current unprecedented booming economy and job growth, particularly in manufacturing, in her bid to be elected to her own term as Governor. Ivey was elevated to Governor from Lieutenant Governor in April 2017.