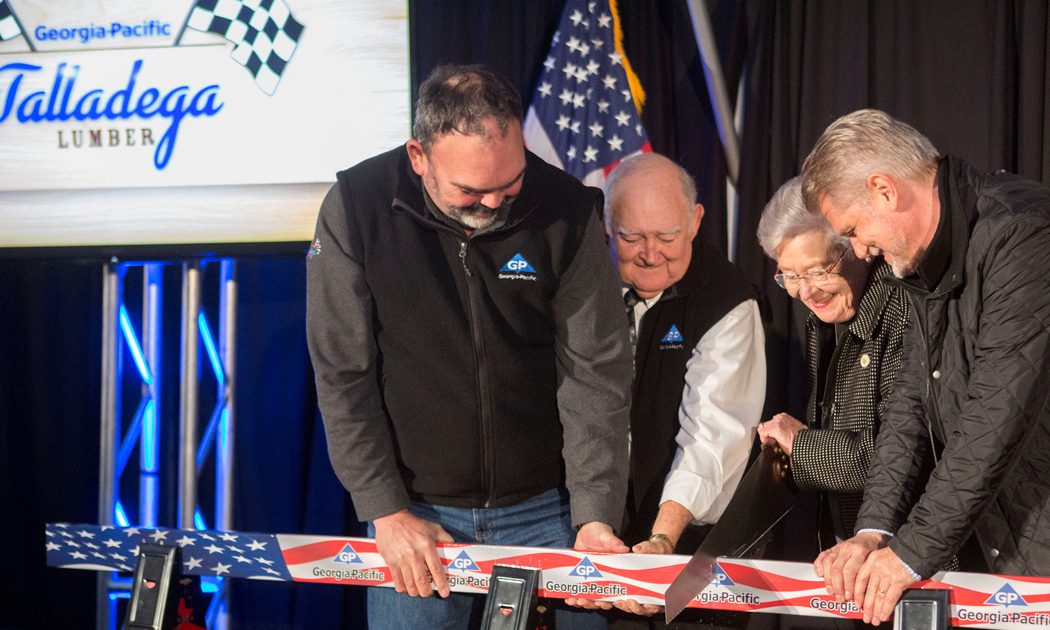 “Georgia‐Pacific’s new lumber facility in Talladega is the company’s eighth location in the state, which further shows that Alabama is a great place to do business,” said Governor Kay Ivey (R). “Our amiable business climate and unparalleled workforce are why notable companies like Georgia‐Pacific continue to do business in our great state.”

“This investment in Talladega, and across Alabama, drives home our focus on providing long-term value to our customers, communities, employees and company,” said Georgia-Pacific President and CEO Christian Fischer. “I’m proud of the many talented employees working at this site. We thank Governor Ivey and Mayor Cooper, and all our community friends and neighbors for supporting our operations and celebrating this achievement.”

Georgia‐Pacific has a major footprint in Alabama. Currently, there are more than 2,300 employees across eight facilities that span all the company’s business segments. In the last five years, Georgia-Pacific has invested approximately $1.2 billion in its operations across Alabama.

“The availability of talent and natural resources make Talladega an ideal site for this new lumber production facility,” said Fritz Mason, vice president and general manager, Georgia‐Pacific Lumber. “The city of Talladega, Talladega County and the state of Alabama have been incredibly supportive of this new venture, and we look forward to a long and beneficial relationship.”

According to the University of Alabama, the construction of the plant had an estimated economic impact of more than $26 million on the city and county.

“Georgia‐Pacific has seven other wood and paper‐related operating plants in the state,” said Calvin Miller, executive director of the Talladega County Economic Development Authority. “This expansion illustrates their commitment to Talladega, Talladega County and the state of Alabama for many years to come.”

The Talladega plant is the first of three new lumber production facilities Georgia‐Pacific will be opening in the Southeast by the end of 2019.

“The demand for lumber continues to improve as the housing market recovers,” said Mason. “We look forward to starting up our other two mills currently under construction in Warrenton, Georgia, in the spring and in Albany, Georgia, in late 2019.”

Economic Developer Nicole Jones told the Alabama Political Reporter, “Forestry Products is one of the state of Alabama’s dominant industries. Alabama has the second largest timberland base in the United States and is ranked Number 7 for lumber production. Estimated by the University of Alabama’s economic modeling to produce an impact of over $26 million, the addition of the newest Georgia-Pacific lumber facility will generate a significant economic boost for the City of Talladega, Talladega County, and the surrounding area.”

“Georgia-Pacific’s continued presence (now eight sites in Alabama) is a prime example of what can result when the public and private sector work together to create communities that people want to be a part of long-term,” Nicole Jones continued. “And, using a saw to cut a red, white, and blue lumber in place of a ribbon is perhaps the most creative ceremony we have ever seen – a ‘cutting edge’ way showcase products Made in Alabama and Made in the USA!”

Ivey made the booming economy and growing workforce a key part of her successful reelection campaign.