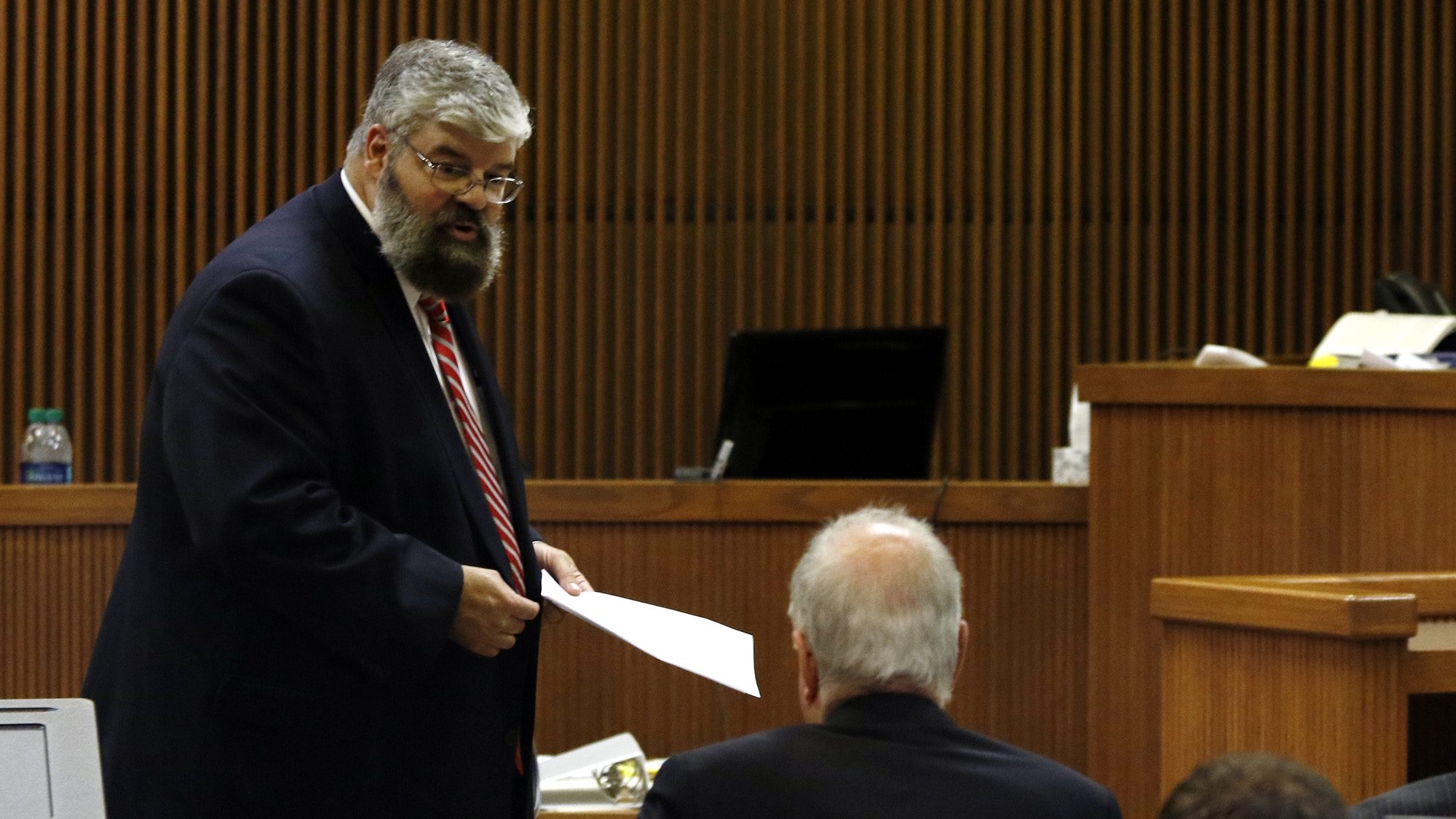 Prosecutor Matt Hart and defense attorney Bill Baxley have a conversation over objections in court during the Alabama speaker Mike Hubbard trial on Tuesday, May 31, 2016 in Opelika, Alabama. (Todd J. Van Emst/Opelika-Auburn News/Pool)

The forced resignation of Deputy Attorney General Matt Hart — the head of the Alabama attorney general’s public corruption unit who is widely known as the most feared man in Alabama politics — has raised a number of serious questions about ongoing investigations, some of which have national implications.

Hart’s resignation, which was hastily forced Monday morning, sources have told APR, comes at a time when President Donald Trump’s appointee to lead the Environmental Protection Agency’s operations in the Southeast was recently indicted along with a former Alabama Environmental Management commissioner.

The administrator, Trey Glenn, who was one of Trump’s first appointees to the EPA, resigned Monday after he was indicted last week on ethics charges in Jefferson County.

Though the indictment is being handled by the Jefferson County District Attorney’s Office and was announced by the Alabama Ethics Commission, Hart and his team, who generally handle high-profile public corruption cases, were overseeing a special grand jury investigating some of the same issues that led to Glenn’s indictment.

Glenn and Scott Phillips, the other defendant in the case, were witnesses in the federal corruption trial involving a severely polluted site in Birmingham and efforts to buy out Alabama politicians to oppose its clean up.

It still isn’t clear why Hart — who was still overseeing that special grand jury empaneled in Jefferson County at the time of his dismissal — wasn’t the lead on the new indictments, which still have not been publicly filed, or why Ethics Commission Executive Director Thomas Albritton directed the case to the district attorney instead of going through the more typical procedure of a commission vote, considering Hart’s team already had a grand jury empaneled in Jefferson County.

The commission could have then sent findings to the AG’s office or a DA to be brought before a grand jury.

Albritton has said the district attorney’s office requested the Ethics Commission’s involvement in a letter. But multiple sources have told APR that it was the Ethics Commission who approached the Jefferson County District Attorney’s Office in an effort to grab headlines before Hart’s team could investigate the pair properly.

The commission has been heavily criticized in recent years for punting ethics cases to local DA’s, avoiding handing cases to Hart’s team and taking increasingly more lenient approaches to campaign finance violations, which culminated earlier this year in a decision from the Commission giving itself the authority to collapse FCPA violations into fewer counts and less fines.

Only a week after Glenn and Phillips’ indictment was announced, Attorney General Steve Marshall forced Hart out from his post as the top public corruption prosecutor in the state.

It’s been reported that Marshall had already begun moving resources away from Hart’s special prosecutions division over his first year in the office, and the two have had an adversarial relationship since Marshall took an appointment from former Gov. Robert Bentley.

Since then, Marshall has taken campaign contributions from some of former House Speaker Mike Hubbard’s most frequent supporters, some of his business investors and witnesses in his corruption trial, which Hart prosecuted.

Hart is well-known for his track record prosecuting tough public corruption cases. He and his team convicted Hubbard in 2016 on 12 out of 23 ethics violations, and all but one of those charges were upheld by the Court of Criminal Appeals earlier this year. Hart was also investigating Bentley when Bentley agreed to resign and pleaded guilty to two campaign finance violations in 2017.

It took less than two weeks after Marshall won his first full term for him to force Hart out, a development that has come as no shock to most in Montgomery’s political circles who knew of their contentious relationship and a welcome move for many politicians who feared Hart and his team.

Marshall’s office has given no reason for Hart’s resignation, saying it doesn’t comment on personnel matters.

But those who are tuned in know Hart has had a particular knack for picking battles with powerful politicians. When he began investigating Hubbard, Hubbard was widely considered the most powerful person in Alabama politics and the most heavy-handed speaker in recent Alabama history. And his prosecution didn’t just target Hubbard, it angered his powerful friends and supporters who were forced to testify at his trial and were mentioned in the charges, many of whom are the big-dollar donors who fund Republican campaigns.

Hart’s hasty ouster leaves several special grand juries without a prosecutor to guide them, and it leaves Hubbard’s ongoing appeal, which is making its way to the Alabama Supreme Court, in question.

At the time of his removal, Hart was believed to be overseeing at least two grand juries, one in Jefferson County and another that is believed to remain empaneled in Lee County. It isn’t clear whether Hart’s grand juries will continue their hearings now that he is no longer at the AG’s office.

The Jefferson County grand jury had already indicted the heads of the Birmingham Water Works Board and former Jefferson County District Attorney Charles Todd Henderson, who was convicted on a first-degree perjury charge, and Hart was making his way through other parts of the government in Jefferson County.

Marshall announced Tuesday that federal prosecutor A. Clark Morris, who has served as an assistant U.S. attorney and acting U.S. attorney in Alabama’s Middle District, would replace Hart as the division’s chief. She’ll be the one who will now oversee all of these ongoing grand juries and investigations.

Morris has largely prosecuted drug crimes during her 20-year tenure at the Department of Justice in both the Northern and Middle Districts of Alabama, though she also served in the Middle District’s white collar crime unit.

She is expected to take over the AG’s special prosecutions division on Jan. 7.