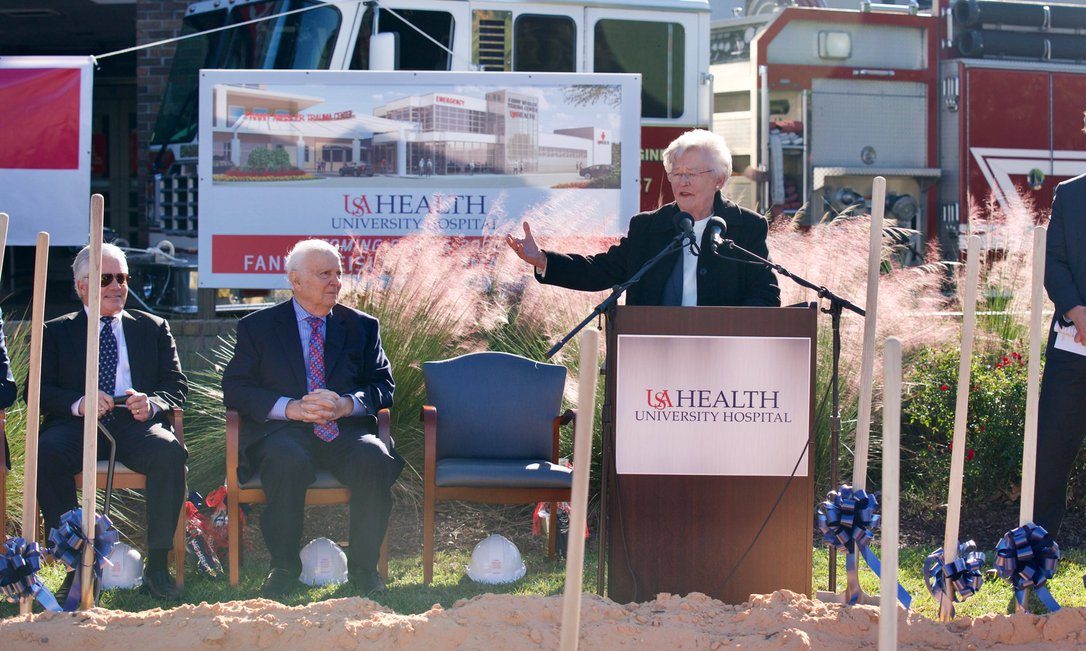 Alabama Gov. Kay Ivey was in Mobile County for the groundbreaking ceremony of the Fanny Meisler Trauma Center at University Hospital.

“A year after awarding a $4 million grant to @usaunivhospital, I’m thrilled to join them & many others in breaking ground on a much-needed expansion of the region’s only Level One Trauma Center.” Gov. Kay Ivey said on Twitter.

The center is possible due to contributions of $4 million from the state and a private donation of $5 million from local businessman and philanthropist Bert Meisler.

State Representative Margie Wilcox said on social media, “It is a beautiful day to have a groundbreaking ceremony. USA’s University Hospital broke ground on the Fanny Meisler Trauma Center. Governor Ivey and many of our Mobile legislative delegation were on hand to turn a shovel for this much-needed transformation of our level 1 Trauma center. Thank you to the Meisler family for the 5 million dollar donation and the State of Alabama for the 4 million appropriated for this life-saving facility.”

The contributions of $4 million from the state and a private donation of $5 million from local businessman and philanthropist Bert Meisler allowed USA Health and the University of South Alabama to break ground on the Fanny Meisler Trauma Center at University Hospital.

The Trauma Center is planned for the Spring of 2020. The new construction and renovation will expand and modernize the current space, enhancing the hospital’s ability to accommodate patients with traumatic injuries and respond to mass casualty situations in the region. The center is named for Fanny Meisler, the late wife of Bert Meisler, who announced his $5 million gift to USA Health earlier this year.
Gov. Ivey announced the economic development grant of $4 million in August 2017 for the trauma center, recognizing the need for expansion of University Hospital’s existing Emergency Department.

“We are proud to support the work of University Hospital as the region’s only Level 1 Trauma Center,” Gov. Ivey said. “We depend on this care for our residents. This service is also vital to our state’s economic development efforts, as corporations demand this level of care when they look to relocate to Alabama.”

University Hospital is the only academic medical center in the region where patients can receive the highest level of care when a traumatic injury occurs. A dedicated trauma team of specialized physicians and staff is on standby at the hospital 24 hours a day, every day, ready to help patients at a moment’s notice.

“We are grateful Gov. Ivey and Bert Meisler recognize the importance of an expanded Level 1 Trauma Center in our region and the role our dedication to quality healthcare has in attracting more businesses and saving more lives,” said University of South Alabama President Dr. Tony Waldrop.

Economic Developer Nicole Jones told the Alabama Political Reporter, “The advancement allows our state to offer top-notch health care for patients in some of the most critical, life-and-death situations. Thank you to the Meisler family and to Governor Ivey and the State of Alabama for recognizing the need for the Fanny Meisler Trauma Center at USA Hospital, currently the only Level-I Trauma Center in the region. This is a wonderful example of collaborative efforts between the public and private sector that will ultimately save lives.”

As a state-certified Level 1 Trauma and Burn Center, USA Health University Hospital serves as the major referral center for patients with traumatic injuries from southern Alabama, southeast Mississippi, and portions of northwest Florida. The hospital’s designated trauma team – which includes around-the-clock trauma surgeons, cardiovascular surgeons and neurosurgeons – treats an average of five critically injured patients a day, which is more than 1,700 people a year. As the go-to facility for the area’s toughest emergencies, University Hospital is capable of providing total care for every aspect of injury, from prevention through rehabilitation.