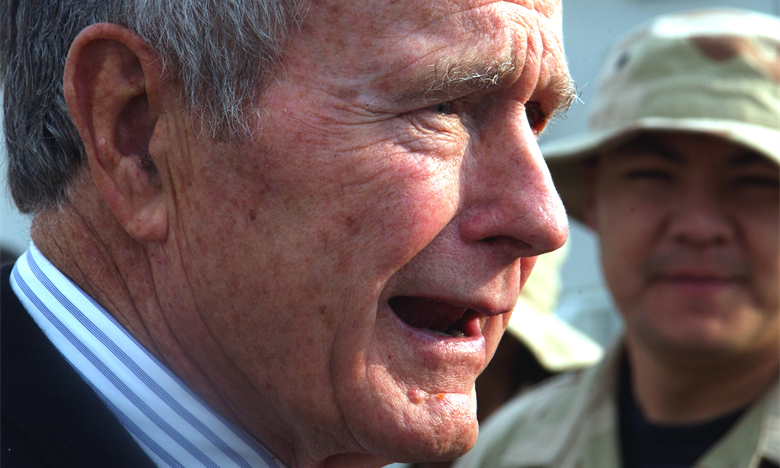 Pres. Trump declared today a national day of mourning to honor the passing of the 41st President, George H.W. Bush.

P“On behalf of the First Family, and my family, and the American people, we offer our deepest sympathies and respects to your family,” Vice President Pence told former President George W. Bush and other family members gathered in the Capitol Rotunda. “And we thank you for sharing this special man with our Nation and the world.”

First Lady Melania Trump hosted former First Lady Laura Bush at the White House, giving her a personal tour of this year’s Christmas decorations and theme, “American treasures.” A few hours later, she and President Trump paid the Bush family a personal visit at Blair House across the street from the White House grounds.
President Trump and the First Lady will attend President Bush’s State Funeral ceremony today at 10:00 a.m.

Congressman Bradley Byrne (R-Montrose) was one of thousands of mourners who paid their respects to the senior Bush while his body was lying in state in the Capital Rotunda on Tuesday.

“President George H.W. Bush’s life is one that spanned nearly a century of American history, and he was always a part of it,” Representative Byrne said. “From WWII pilot to service in the House of Representatives, UN, CIA, Vice Presidency, and Presidency, President Bush was a man of honor, integrity, and a true American leader.”

Senator Richard Shelby (R-Alabama) was a member of Congress throughout Bush’s tenure as Vice-President and President.

“This week we are fortunate to have the opportunity to honor and respect the life and legacy of President George H.W. Bush. #Remembering41,” Shelby (R) said on Twitter. “President George H.W. Bush was a true American statesman and hero. He dedicated his life to serving the country he loved for more than 70 years. From a young Naval aviator shot down in WWII to Commander-in-Chief, President Bush led our country with integrity, honor, and measure. Annette and I join all Americans in mourning his passing. His legacy of humility and devotion will never be forgotten.”