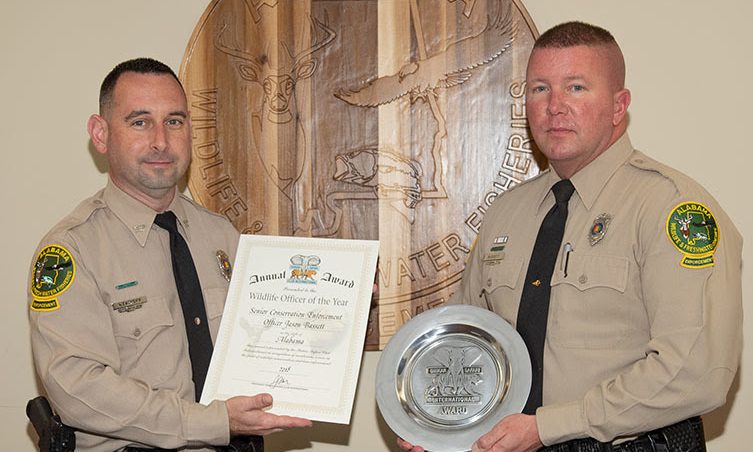 Jason Bassett has been named Alabama Wildlife Officer of the Year by the Shikar-Safari Club International (SSCI).

“What truly sets Officer Bassett apart are his personal qualities,” said WFF District Two Law Enforcement Supervisor Lt. Jerry Fincher. “He is loyal to a fault, honorable, level-headed and a true team player. You will never hear Jason boasting. Instead, he’ll stand in the shadows of his own accomplishments realizing he is blessed to be a link in the chain of conservation stewardship.”

Bassett currently serves as a Senior Conservation Enforcement Officer with the Alabama Division of Wildlife and Freshwater Fisheries (WFF) in St. Clair County.

Each year SSCI honors one officer from each state with the award. Bassett was recently presented with the award at WFF headquarters in Montgomery.

Officer Bassett is credited with routinely making a high number of quality arrests including some unusual cases involving electrofishing and cheating in bass tournaments. Officer Bassett recently played a vital role in stopping the overharvest of game fish in St. Clair County. The case involved the illegal taking of massive amounts of striped and hybrid bass from public waters to be sold in restaurants and fish markets across the Southeast. Bassett hid himself on dams and among rocks to observe and record the illegal activity, while his fellow officers stood by at off-site locations to intercept the violators. Thanks in part to his efforts, regulations are now in place to prevent this type wildlife violation in the future.

Bassett has served the people of Alabama as a Conservation Enforcement Officer for more than 15 years. He has not only prevented hundreds of wildlife violations, he has also saved the lives of some of his fellow officers.

“Every Alabamian may owe Officer Bassett a debt of gratitude, but I owe him much more,” said Lt. Fincher. “While eating at a local restaurant with Jason, I became choked. Unable to breathe I could feel myself losing consciousness. He immediately put his first aid training to work by pulling me from my seat and successfully performing the Heimlich maneuver. He saved my life.”

While working alongside Bassett, Conservation Enforcement Officer Greg Gilliland became involved in a confrontation which resulted in his arm becoming trapped in a vehicle’s steering wheel as the driver attempted to back over him. Rushing to his aid, Officer Bassett pulled both men from the vehicle and made the arrest.

“Officer Bassett’s selfless service to his state and his fellow officers is an example for us all to follow,” said Chris Blankenship, Commissioner of the Alabama Department of Conservation and Natural Resources. “For these reasons and many more, Jason is very deserving of this award.”

Officer Bassett is also a FBI-certified firearms instructor, defensive tactics instructor, Glock and M16 armorer, and a Becoming an Outdoors-Woman instructor. He also serves as an adjunct instructor at the Northeast Alabama Law Enforcement Academy where he teaches firearms and self-defense tactics to new recruits.

SSCI is an international conservation organization that funds and supports a variety of conservation projects and scholarships around the world. In addition to recognizing outstanding officers in wildlife conservation, SSCI also provides a $20,000 death benefit to the officer’s family in the event the officer is killed in the line of duty.