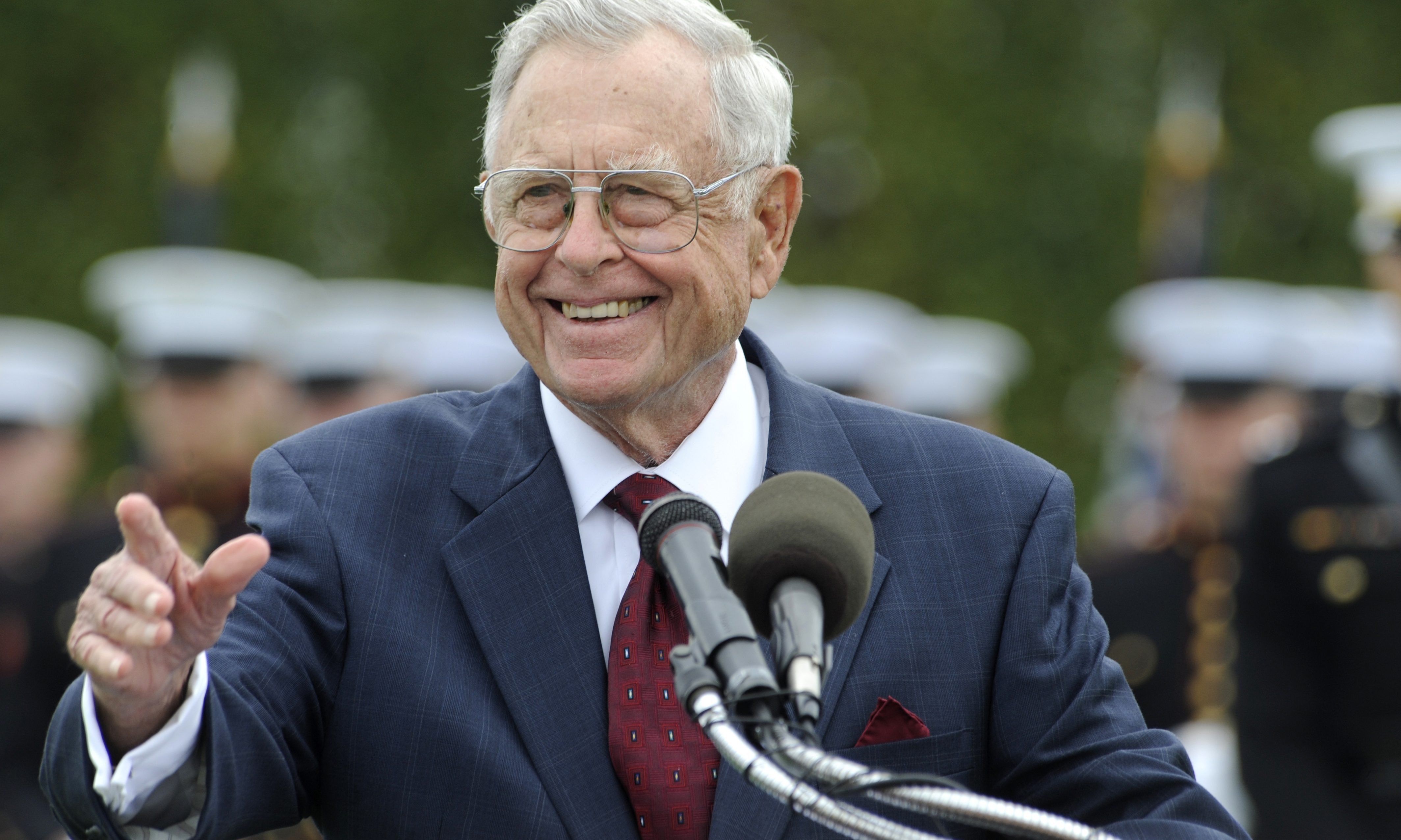 090918-D-7203C-002 Retired rear admiral Jeremiah A. Denton Jr. addresses the audience during the National POW/MIA Recognition Day Ceremony at the Pentagon on Sept. 18, 2009. Denton spent 7 years and 7 months as a prisoner of war when he was shot down and captured by North Vietnamese troops in 1965. DoD photo by Cherie Cullen. (Released)

Denton was a former Republican U.S. Senator from Alabama and a well-known U.S. Navy Vietnam veteran and Navy Cross recipient that was held in captivity by the North Vietnamese during the Vietnam War. The ship will be constructed at Ingalls Shipbuilding shipyard in Pascagoula, Mississippi, roughly 40 miles from Denton’s hometown of Mobile.

“Admiral Denton’s legacy is an inspiration to all who wear our nation’s uniform,” Spencer said. “His heroic actions during a defining period in our history have left an indelible mark on our Navy and Marine Corps team and our nation. His service is a shining example for our Sailors and Marines and this ship will continue his legacy for decades to come.”

“Secretary Spencer’s decision to honor Admiral Jeremiah Denton embodies the significant impact of his courageous actions during the Vietnam War,” Shelby said. “Admiral Denton’s patriotism, sacrifice, and noble service to Alabama and our great nation will never be forgotten. He is very worthy of this honor, as his legacy merits this level of recognition.”

Denton graduated from the U.S. Naval Academy in 1946 and went on to serve in the Navy for 34 years as a test pilot, flight instructor, and squadron leader. Following decades of military service, Admiral Denton was elected to the U.S. Senate in 1980 where he honorably served the state of Alabama for six years.

In July of 1965, then-Commander Denton’s A-6 Intruder jet was shot down over North Vietnam. He spent the following eight years as a prisoner of war – many of those years in isolation. During an interview with a Japanese media outlet, Denton used Morse code to blink “torture,” signaling for the first time to U.S. Naval Intelligence that American troops were being tortured. Despite attempts to force military information out of Denton with torturous methods, he remained loyal to the United States. He was released from captivity in 1973 and finally retired from the Navy as a Rear Admiral in 1977. His heroic actions earned him the Navy Cross, the U.S. military’s second-highest decoration awarded for valor in combat. He also earned a silver star, purple heart, bronze star, distinguished flying cross, and other medals and commendations.

The future USS Jeremiah Denton (DDG 129) will be capable of fighting air, surface, and subsurface battles simultaneously. The Navy vessel will contain a combination of offensive and defensive weapon systems designed to support maritime warfare, including integrated air and missile defense and vertical launch capabilities.

Denton was the first Republican elected as U.S. Senator since Senators began being popularly elected in 1914 after the passage of the 17th Amendment to the U.S. Constitution. Prior to the 17th Amendment, a state’s Senators were chosen by the state legislatures.

Senator James Allen, D-Alabama, served as Senator from 1969 to his death from a sudden heart attack in June 1978. His widow, Maryon Pittman Allen (D) was appointed by Governor George C. Wallace (D). State Senator Donald Stewart (D) then defeated Mrs. Allen in the special Democratic Party primary and then former Congressman James D. Martin (R) in the special general election for the remaining two years of Mr. Allen’s term. Mrs. Allen died last July at age 92. Martin died in 2017. In the 1980 Democratic Primary Donald Stewart received 48.63 percent of the vote; James E. Folsom Jr. had 35.67, Finis St. John had 11.2 percent, and Margaret Stewart had 4.5 percent. Folsom, the son of former Governor “Big Jim” Folsom (D), defeated Sen. Stewart in the Democratic primary runoff 50.6 percent to 49.4 percent. Denton defeated Folsom in the 1980 general election 50.15 percent to 47.05 percent. Denton was part of a Republican wave election that swept former California Governor Ronald W. Reagan (R) into office and gave Republicans their first Senate majority in decades. Denton was defeated by Shelby, then a Democrat, in the 1986 election 49.72 percent to 50.28 percent. Democrats took back control of the Senate that election.

Denton was married for 61 years to Katherine Jane Maury. They had seven children. She died in 2007. Denton married Mary Belle Bordone in 2010. Denton died of complications from a heart ailment on March 28, 2014, at age 89. He is buried at Arlington National Cemetery with his wife Jane.