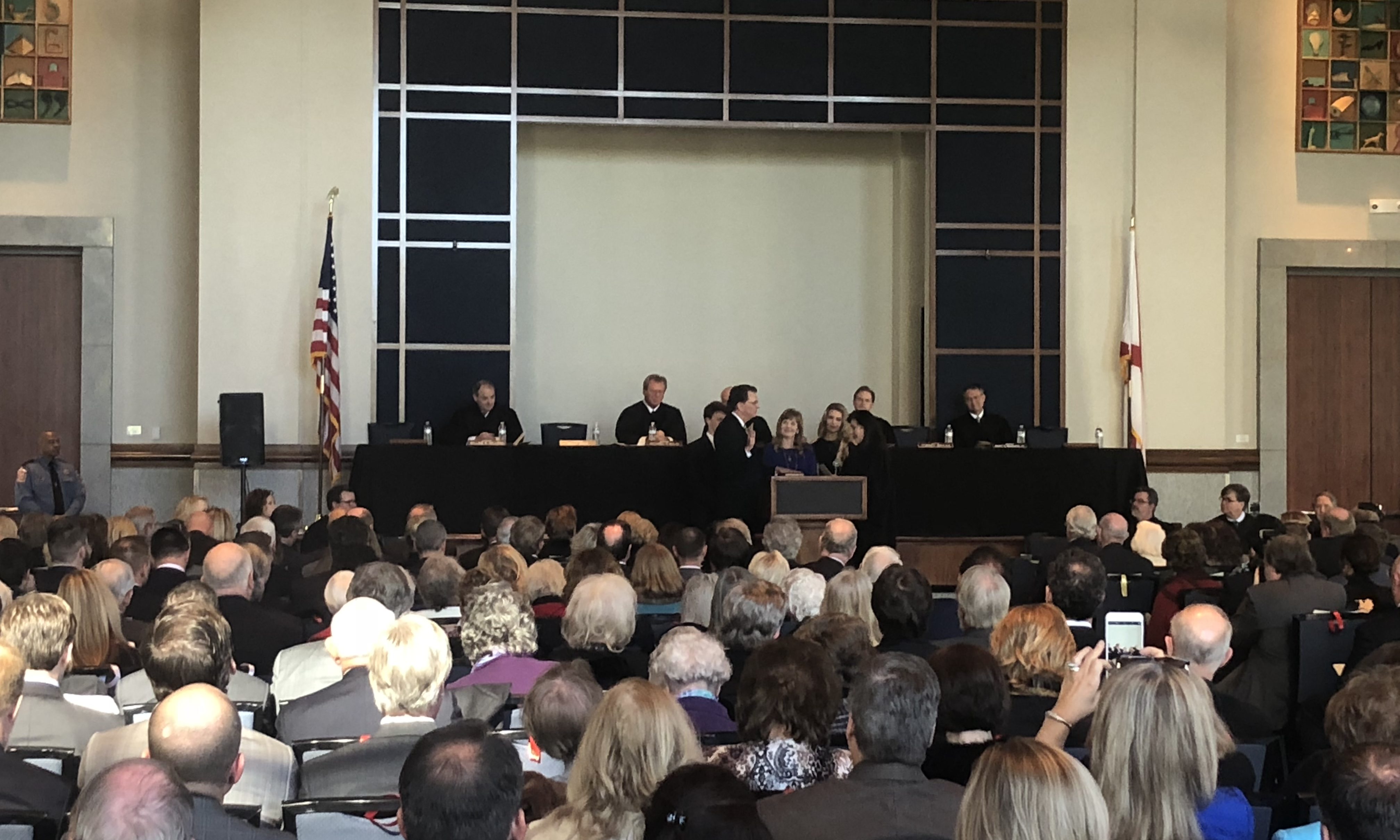 Friday, Tom Parker was sworn in as the Chief Justice of the Alabama Supreme Court at an investiture ceremony in Montgomery. The new associate justices, as well as the new members of both the Court of Criminal Appeals and the Court of Civil Appeals, were also sworn in at the same event.

Speaker of the House Mac McCutcheon, R-Monrovia, administered the oath of office to Justice Parker. McCutcheon said to Parker, “What an honor it is to administer the oath office to you today.”

“My wife, Dottie and I are deeply humbled that you are here today,” Chief Justice Parker said. It is my intent that this interbranch swearing in is symbolic of the mutually supportive relationship between the coequal branches of government that we will have going forward. “I have been a Justice on the Supreme Court for fourteen years. Prior to that I was deputy director of the Administrative Office of the Courts.”
“The Constitution of Alabama mandates that the Judicial System of Alabama be adequately funded.”

The Chief Justice said that the courts must have sufficient administrative personnel for the courts to function and for the security of the courts to be maintained.

Parker made several quotations from the Bible including: “Of the increase of his government and peace there shall be no end, upon the throne of David, and upon his kingdom, to order it, and to establish it with judgment and with justice from henceforth even for ever. The zeal of the LORD of hosts will perform this.” (Isaiah 9:7 KJV) and “I walk in the way of righteousness, along the paths of justice,” (Proverbs 8:20 NISV).

Once sworn in as Chief Justice, Parker took over as the presiding officer at the investiture ceremony.

“Being on the court with him is an absolute privilege,” Justice Wise said. “He is a man that always follows the rules of law.”

“I grew up on a small family farm outside of Brantley,” Justice Tommy Bryan said. It is m y hope that my life experience as a child, as a son, as a student, as a husband, as a father as a lawyer, and a believer will prepare me temper justice with mercy.

“Running for statewide office is not for the faint of heart,” Stewart said. Stewart emphasized that a judge’s is to interpret and not make the law. “I pledge to you to always be impartial.” “For thirteen years I have had the privilege to serve with outstanding trial judges in Mobile and throughout the state.”

“Justice was the most searched for word of 2018,” Mitchell said. “As Americans justice has always been at the center of our hearts and minds.” “Justice is a quintessential American idea.” “I am a servant of the law. It is my duty to determine what the law is, not what it should be.”

Pastor Chris Hodges of the Church of the Highlands said it is great to be here today and it is an honor to be part of a state that begins and ends an event such as this with prayer.

The oath of office to Jay Chris McCool was administered by federal District Judge Lyles Burke. McCool was sworn in to the Alabama Court of Criminal Appeals.

“The Lord has blessed this great nation and it is important not to forget that,” McCool said. “’Walk humbly with thy God’, or as my daddy used to put it, ‘Don’t get too big for your britches.’ In the judicial fields that means apply the law don’t make it.”

The oath of office was administered by Associate Justice Michael A. Bolin to James William “Bill” Cole. Bill Cole was sworn in as a judge on the Alabama Court of Criminal Appeals.

“I loved doing appellate court work as an attorney and that is part of why I am here today,” Judge Bill Cole said. “I am proud to serve as a Circuit Court Judge and I am proud of being elected to this place on the Court of Criminal Appeals; but there is nothing in my life than I am more proud of than my children.” “I love the law and I love studying the law and I pledge to everyone that I will follow the Constitution.”

The oath of office was administered to Richard J. Minor by federal Appeals Court Judge William H. “Bill” Pryor. Richard Minor will serve on the Alabama Court of Criminal Appeals.

“Our nation was founding on the principles of order, liberty, and justice,” Judge Richard Minor said. “I fully recognize that I now have the opportunity to advance the cause of justice from the bench.” “A judge must be an advocate for the rule of law itself.” “I stand ready and eager to

The oath of office was administered to Christy Olinger Edwards by Associate Justice Tommy Bryan. Edwards serves as a judge on the Alabama Court of Civil Appeals.

“The robe that I will wear does not belong to me, but to the people of this state,” Judge Hanson said. “I will have to work hard to maintain their confidence.”

Alabama is a very Republican state and all of the members of the Alabama Supreme Court, the Alabama Court of Criminal Appeals, and Court of Civil Appeals are Republicans.

Alabama Governor Kay Ivey, Lieutenant Governor Will Ainsworth, Attorney General Steve Marshall, state Auditor Jim Zeigler and the other statewide constitutional officers will be sworn in to four year terms on Monday at 10:00 a.m. in front of the Alabama State Capital building.