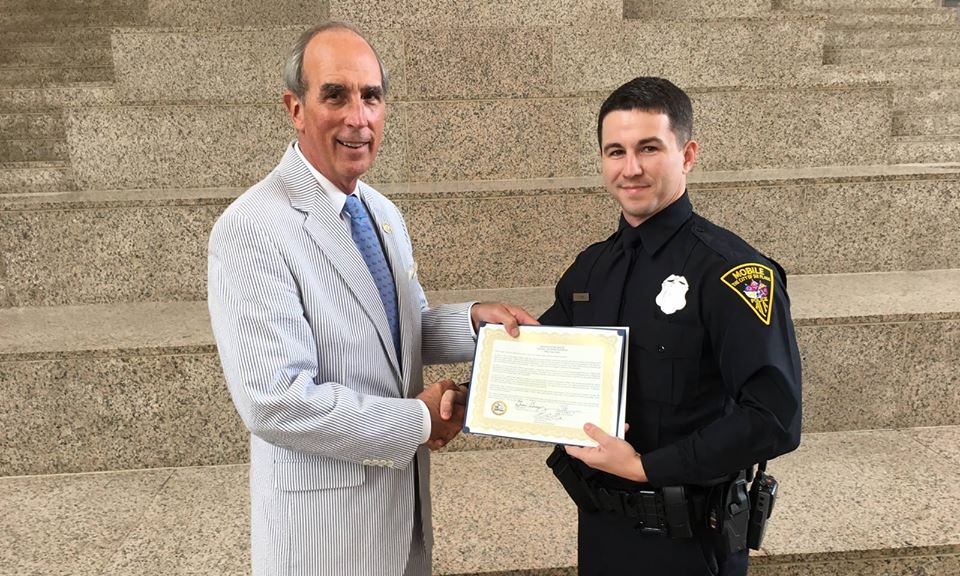 Tuder, along with other officers, was attempting to execute an arrest warrant at an apartment complex at 1545 Leroy Steven Road in Mobile.

A suspect is in custody — 19-year-old Marco Perez.

Alabama Gov. Kay Ivey expressed her sadness at the news of the loss of Officer Tuder.

“Less than a day after laying to rest Birmingham Police Sergeant Wytasha Carter, I’m saddened to learn of the death of Mobile Police Officer Sean Tuder, who was killed today in the line of duty,” Ivey said. “I extend my sincerest condolences and heartfelt prayers to Officer Tuder’s wife and family, fellow officers and to the community he served. Officer Tuder was an exceptional young officer, a true leader and was once recognized as ‘Officer of the Month’ for his commitment to serve and protect.”

Birmingham Police Sergeant Wytasha Carter was killed earlier this month. He and others were working a special detail targeting car break-ins in downtown Birmingham

“This senseless tragedy has sadly taken the life of yet another Mobile police officer, far too soon, and stands as a reminder of the sacrifices made by those who wear the badge,” Ivey said. “To the Mobile community, know that all of Alabama joins you in mourning this remarkable law enforcement officer.”

State Auditor Jim Zeigler said in a statement, “Please be in prayer for the family, fellow officers and emergency personnel. This is the second officer killed in the line of duty in Alabama this week. We need to take every possible step to safeguard our law enforcement. Evil is real in our world.”

Alabama Attorney General Steve Marshall said on social media, “Tonight Alabama mourns the loss of another law enforcement officer. @MobileALPolice Officer Sean Tuder was killed in the line of duty while executing an arrest warrant. A suspect is in custody. We pray for Officer Tuder’s family and his fellow officers. #ThinBlueLine”

Perez is also a suspect in 18 car break-ins, federal firearms violations, and a false kidnapping report. He is suspected of faking his own kidnapping last week to avoid arrest.

Officer Sean Tuder was only on the Mobile Police force for three years. He was the officer of the year in 2017. He leaves behind a wife.

The Alabama law enforcement community had only buried Birmingham Police Officer Wytasha Carter on Saturday. Officer Carter had died from wounds suffered in the line of duty just a week ago.

According to the Guardians of the Thin Blue Line website: nine law enforcement officers have been killed in the line of duty already in 2019.